Back to Godhead > Prabhupada > Srila Prabhupada Speaks Out On Absolute Authority

The following conversation between His Divine Grace A.C. Bhaktivedanta Swami Prabhupada and one of his disciples took place in Bhuvanesvara, India. 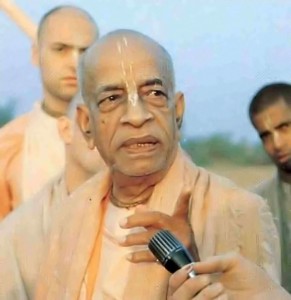 Devotee: Srila Prabhupada, one criticism against our Krishna consciousness movement is that we are following absolute authority. People are critical because we rigidly adhere to your authority and to the authority of the scriptures. They say this is not a healthy psychology.

Srila Prabhupada; Their criticism is a contradiction. If they say authority is not good, then why are they criticizing us? They are trying to impose their own authority on us.

Devotee [in the role of an antagonist]: I don’t say you have to accept me as an authority.

Devotee: Well, everyone has his own life to live, so each person should take the best from many authorities. I might accept some ideas from your philosophy and some from various other philosophies as well. I can take whatever I think is best for me.

Srila Prabhupada: But if you find the best of everything all in one place, then why should you run here and there?

Devotee: Well, history teaches us that whenever there is absolute authority, it isn’t healthy—like Hitler’s Germany, for example.

Devotee: But people often confuse our allegiance to scriptural authority with totalitarianism. One professor told me that if the Krishna consciousness movement ever became powerful, we would probably be intolerant towards all other religions.

Srila Prabhupada: That means he does not understand us.

Devotee: Suppose someone didn’t want to be a devotee in a society with a Krishna-conscious king or president. What would happen to him?

Srila Prabhupada: The king must chastise him—he has that power. For example, if a child says, “Father, I don’t believe in education; let me play,” the father will never allow it. The king’s duty is to guide the citizens like that.

Devotee: But if someone wanted to be a Christian in a society governed by a Krishna-conscious leader, would that person be chastised?

Srila Prabhupada: The father does not chastise always, but only when his son does something wrong. To practice the Christian religion means to believe in God and abide by His orders. A faithful Christian would not be persecuted in a society with Krishna-conscious leadership.

Devotee: So the Christians would be allowed to follow the Bible?

Srila Prabhupada: Yes. To follow the Bible is certainly religion. But the Christians today do not follow their scripture. The Bible says, “Thou shall not kill,” but they are killing millions of cows and eating their flesh. What kind of Christianity is that?

Devotee: So they should be chastised.

Srila Prabhupada: Yes, they should be punished. That is the duty of the king. You may follow any bona fide religion and receive all protection by the Krishna-conscious government. But if you don’t follow your own religion faithfully, then you must be corrected. That is the king’s duty. A king cannot dictate that you must follow one particular religious faith, but he can order that you follow some religion. If you have no religion, then you’re an animal, and you must be chastised. Religion means the instruction given by God (dharmam tu saksad bhagavat-pranitam). And to be religious means to obey God and to love Him. So it doesn’t matter through what religious process you have understood God. The important thing is that you love God and abide by His orders. Then you are religious. But if you do not know God—or if you have some imaginary god-then you must learn who God actually is. And if you refuse to learn, then you must be punished.

Devotee: If someone says, “I know God,” what is the test to see if he really does?

Srila Prabhupada: The test is that he must be able to explain about God to others. Ask him, “Can you say what God is?”

Devotee: “God is the force moving the universe.”

Srila Prabhupada: So that means you do not know God. Who is behind the force? Whenever there is force, there must be a person who is forceful—who is forcing. Who is that?

Devotee: I don’t have such vision.

Srila Prabhupada: Then learn about God from me. And if you refuse, then you must be punished. You see, the king has to see that the citizens are God conscious. That is his duty.

Devotee: Then a Krishna-conscious leader has to be like a father.

Srila Prabhupada: Yes. That quality was personally exhibited by Lord Ramacandra. He treated His subjects like His own sons, and they treated Lord Rama as their father. The relationship between the king and the citizens should be like that between a father and his sons.

Devotee: The chastisement that the king gives…

Srila Prabhupada: That is out of love, not enviousness. Chastisement means correction. If a citizen is acting wrongly, he has to be corrected. This is actually Krishna’s business in human society: to chastise the miscreants, to give protection to the godly persons, and to establish the true principles of religion. This is the mission of the Supreme Personality of Godhead in the world, and we have to execute His mission. Gradually Krishna-conscious devotees have to take the posts of leadership and correct the whole human society.