Back to Godhead > Society > Abortion > Abortion: Setting the Matter Straight

Life in the Womb Begins at Conception

One of today’s most disturbing, confusing, and hotly debated issues is whether abortion is right or wrong. Feelings run deep, and both sides offer complex arguments. But at the heart of the controversy lies one crucial question: When does life begin within the womb? Ironically, despite so much progress in economics, education, technology, and so on, even our leaders are still unable to answer this basic question. 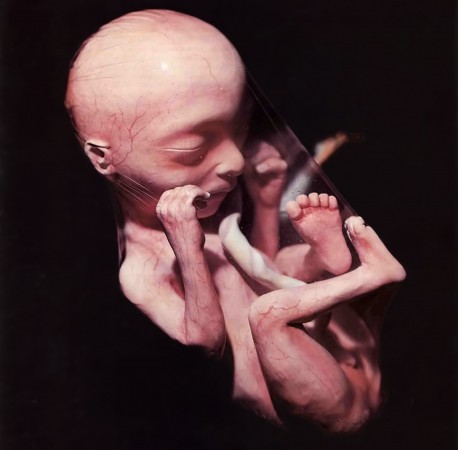 Take, for example, the U.S. Supreme Court. In 1973 the Court ruled that women could legally have an abortion during the first three months of pregnancy. Although they lacked any relevant evidence whatsoever, the justices decided that the element of life does not enter the fetus until after the third month. In effect, the justices turned their court into a pseudoscientific laboratory and legalized an act that had been virtually outlawed throughout the United States. The result? A staggering increase in the number of known abortions—from several thousand in 1973 to over one million in 1976.

However, in a 6-to-3 decision handed down a few months ago, the Supreme Court appeared to be back-tracking from its previous pro-abortion stand. Now, in an obvious reaction to grass-roots anti-abortion pressure, he Court has ruled that state and local governments can refuse to finance abortions for needy women. Although lot outlawing abortions altogether, the Court’s latest ruling has made them exceedingly more difficult to obtain—and has proved beyond a doubt that even the highest judges in the land are more concerned with public opinion than with scientific fact.

After all, if the justices had had some scientific basis or their first ruling—that the fetus is not really “alive” until after the third month of pregnancy—then why should hey now reverse themselves and make abortions during he first three months more difficult to obtain? What would be the harm in getting rid of a “lifeless lump of flesh” to protect the welfare of an unwed mother, for example? On the other hand, if some new scientific evidence has recently come to light proving that life in the womb begins at the point of conception, then why won’t he Supreme Court outlaw abortions altogether? Why should they continue to condone mass infanticide? Clearly, the Supreme Court has shown its ineptitude at solving the abortion issue.

So we are left still facing our basic question: When does life begin within the womb? In searching for answers to this question, we must first understand hat we are not dealing with something gross—something we can measure in a laboratory. The life principle is the subtlest substance in existence. We can’t see it with the most powerful microscope or weigh it on the most sensitive scale. In fact, the Vedic Upanisads explain that the dimension of the soul, or life force, is one ten-thousandth part of the tip of a hair. This is even smaller than the atom! Therefore, if we want to understand this life force, we must approach authorities who are beyond the limitations that our imperfect mind and senses place upon us. In other words, the Supreme Court won’t do; we must approach a transcendental source of knowledge—the revealed Vedic scriptures.

At this point the reader may object that our method of acquiring knowledge is dogmatic and blind. But think for a moment: Is there really any other way to find out about something as subtle as the soul? Suppose you want to know the identity of your father, but you’ve never seen him before? Can you perform some experiment to find out? No: there’s only one way to know for sure who your father is—ask your mother. Only she can authoritatively say, “That man is your father.”

Similarly, if we want to know about the soul—which is beyond our sensory experience, beyond our experimental knowledge—then we must accept the Vedic authority. Veda means “knowledge,” and the Vedic knowledge comes from Lord Krishna, or God, and is therefore infallible. If we accept the words of the Vedic literature we can truly understand the nature of life, and when it begins in the womb. Then we can finally resolve the abortion issue.

Now, according to modern scientific theory, various chemical reactions in the body of the developing fetus produce the life force, or consciousness. Until those chemical reactions occur, the scientists say, no life is present. From this point it is easy to take our logic one step further and conclude that up to a certain age—say, three months—the child within the mother’s womb is not alive, but is simply a lump of dead matter. The final grisly conclusion is that since the body of the developing child is like a tumor, what is the harm if a surgeon removes the tumor and throws it away?

In contradiction to this distorted idea, the Srimad-Bhagavatam, the essence of all Vedic knowledge, declares, “Under the supervision of the Supreme Lord, and according to the result of his previous work, the living entity (the soul), dwelling within the male sperm cell, enters a woman’s womb to assume a particular type of body” (Srimad-Bhag. 3.31.1). This authoritative statement resolves the crucial question of when life begins in the womb. Most emphatically, life begins from the point of conception—the point at which the sperm, carrying the soul, enters the ovum.

Another important point to note is that the right to life is determined by divine law, not by our whimsical decisions. It is the law of karma, working under the supervision of the Supreme Lord, that determines when an individual spirit soul will enter a human womb. (A common-sense proof of this is that conception often occurs despite the most extensive contraceptive measures. Also, a previously sterile woman or impotent man may sometimes conceive a child.) So if, through violent abortion, we try to deny a soul a human birth due him by the laws of karma, we defy God’s will in a most heinous fashion.

By that same law of karma, anyone who destroys a developing fetus must suffer severe punishment after death. “As you sow, so shall you reap,” declares the Bible, and the Vedic literatures confirm that both the person performing the abortion and those sanctioning it are forced at the time of death to enter wombs where they themselves become victims of the same vicious act. Abortion is a grave transgression of the laws of nature and of God. So those who are anxious to enjoy sexual pleasure, yet wish to avoid the responsibility of rearing children, should soberly consider abortion’s severe consequences. Unlike the edicts of the Supreme Court, the laws of nature and of God are always strictly enforced.

The Real Problem… and the Solution

Behind the abortion crisis we’ll find an even deeper problem: the recent vast increase in the number of unwanted pregnancies. This is another crisis—a crisis so severe that millions of Americans are resorting to murder of unborn infants as the only apparent solution. “Without legal and affordable abortion,” wrote Lance Morrow in a recent Time editorial, “many lives in progress are hopelessly ruined; the unwanted children very often grow up unloved, battered… and criminal.” We certainly agree that we must rectify these social conditions. But what sane person, understanding that the fetus is fully alive from the moment of conception, would then consider abortion a valid solution to unwanted pregnancy?

We seem to be caught on the horns of a cruel dilemma: the horror of abortion, or the misery of broken lives, broken homes, and masses of unwanted children. But the truth is that the crises of abortion and unwanted pregnancy, as well as those of veneral disease, child abuse, and divorce, have arisen from the same basic cause—unrestricted illicit sex life. The Vedic scriptures allow sex for only one purpose—to produce God-conscious children. Therefore sex only for pleasure is a violation of God’s law, and a society of sex mongers must suffer punishment in the form of the abortion, pornography, and VD plagues, widespread child abuse, and so on.

American society is feeling the agonizing reaction to its own godlessness, and discussions about whether states should or should not help pay for abortions are like so much aimless chatter aboard a sinking ship. By ignoring the scriptural rules governing sex, we have descended to the level of animals. What good is “reasoned discussion” among the beasts? By killing more than one million unborn babies every year, Americans are committing the largest mass murder in recent history—and now they’re trying to decide how to do it fairly and morally!

No. The only moral issue here is how to stop illicit sex. Everyone, from the nation’s leaders on down, must understand God’s purpose for sex—to produce God-conscious children. Furthermore, all government leaders must strictly adhere to this principle in their own lives and vigorously propagate it throughout society.

Unfortunately, our so-called leaders do not have the moral strength to live by God’s laws. Therefore they do not care to enforce God’s laws within society. The laws God presents in the revealed scriptures are meant to insure peace and prosperity, and ultimately to guide the citizens toward God consciousness. But our demonic leaders’ nefarious business is to perpetrate the philosophy of unrestricted sense pleasure—especially sex pleasure. As the Bhagavad-gita explains, “The demons believe that to gratify the senses up to the end of life is the prime necessity of human civilization. Thus there is no end to their anxiety.”

Abortion, divorce, child abuse—the list of anxieties will simply increase unless we stop illicit sex. And the only way to do this is to replace the present leaders with trained Krishna-conscious leaders, who will have the spiritual strength to control their own senses and turn society back from its hell-bent course.

One Response to Abortion: Setting the Matter Straight