Back to Godhead > ISKCON > News > Every Town and Village: ISKCON Goes on the Air in Memphis

Every Town and Village: ISKCON Goes on the Air in Memphis

ISKCON Goes on the Air in Memphis 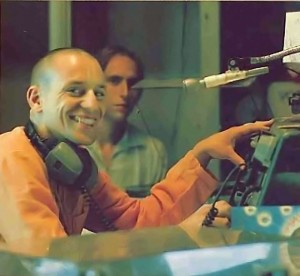 Brahma dasa at the WEVL console

Every Tuesday night in Memphis, Tennessee, the transcendental sounds of a two-and-a-half-hour Hare Krishna radio show fill the Southern airwaves, courtesy of station WEVL, 90.3-FM. The program, aired live, includes a variety of guest interviews, comedy/satire, and music—all centered on the dynamic philosophy of Krishna consciousness.

Station manager Dennis Badson explains that the community-owned station seeks out unusual programs not normally broadcast on commercial radio. Not long ago Brahma dasa, the president of ISKCON’s Memphis center, offered to do a show called “The Cheaters and the Cheated.” He told the station’s board members that the show would expose the shortcomings of modern society and present the alternative society—one based on God consciousness, “simple living and high thinking.” Program director Bart Lipman liked the idea and asked to hear more.

Brahma dasa took the opportunity to explain, “We want to show how the big leaders have systematically conditioned ordinary people to search for happiness under a completely false conception of life. They have directed people toward acquiring useless paraphernalia that only drives them deeper into the realm of hopelessness. The leaders are misguiding everyone into thinking that advancement means concrete, steel, money, and the selfish pursuit of pleasure. As a result, everyone feels constantly driven and repeatedly frustrated by an unending network of artificial desires. And, of course, that mentality simply results in crime, poverty, and social unrest. Then the masses—and even the so-called leaders—try to shelter themselves from despair with alcohol, cigarettes, drugs, pornography, and so forth. We should rise to a higher state of consciousness and happiness. Unless we realize that the real goal of life is God consciousness, we will never achieve any real advancement—only a shadow advancement that leads to chaos and destruction.”

The Summer of the Chariots 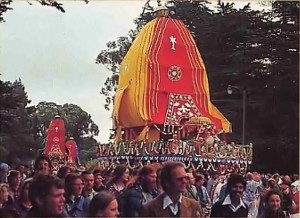 This summer, for the eleventh-straight year, the chariots of Lord Jagannatha (the Lord of the Universe) rolled down the avenues of American and Canadian cities. The International Society for Krishna Consciousness was restaging a festival held since time immemorial in the city of Puri, India. Hundreds of thousands of amazed and delighted people witnessed Ratha-yatra—the Festival of the Chariots.

This year’s festival in New York City was as memorable as ever. Three huge, bright-canopied, hand-drawn wooden chariots left Central Park and journeyed down Fifth Avenue to Washington Square Park. Harvard University religion professor Harvey Cox rode on one of the carts and later spoke to the crowd on the importance of the Hare Krishna movement. “I’m here to pay tribute to a movement which has meant a lot to me, spiritually and intellectually,” said Dr. Cox. He went on to condemn the attacks of “deprogrammers”: “They are trying to deprive the devotees of the most valuable possession in life—faith in the Supreme Lord.”

For a full week the chariots stayed in Washington Square Park, until at last devotees and well-wishers drew them back along Sixth Avenue to the temple. The week of festivities peaked at the day’s free feast and festival in Central Park. Musician-composer Alice Coltrane delighted the crowd with her Gospel-flavored renderings of traditional Krishna chants. And VEDA (ISKCON’s new Vedic Ensemble of the Dramatic Arts) presented an enchanting original dance performance based on the ancient Indian epic Ramayana.

Similar festivals took place in Honolulu, Toronto, and Atlanta; at Philadelphia’s historic Independence Mall; in San Francisco’s Golden Gate Park, where Ratha-yatra in the West began; and along Venice Beach in Los Angeles, where police estimated the crowd at 200,000.

From October 14 to 16, in the historic and holy city of Vrndavana, India, ISKCON’s Bhaktivedanta Institute will hold an international scientific conference titled “Life Comes from Life.” Scientists from around the world will gather to discuss the central theme—that life arises not from material but from spiritual causes—in light of both modern theories and the ancient Vedic literatures.

The Bhaktivedanta Institute, the academic division of ISKCON, comprises professional scientists and scholars who are also devotees of Krishna. These men study the Vedic information on nature, the self, consciousness, and God, and they present their gleanings to the world academic community. For further details, please contact Svarupa Damodara dasa Brahmacari (Thoudam Damodar Singh, Ph.D.), Director of the Bhaktivedanta Institute, at 70 Commonwealth Avenue, Boston, Massachusetts 02116. Phone: (617) 266-8369.

“For the welfare and happiness of mankind, His Divine Grace Srila A.C. Bhaktivedanta Swami Prabhupada, the founder- acarya of the ISKCON movement, has taken upon himself the stupendous task of translating the Srimad-Bhagavatam from Sanskrit into English in about sixty volumes. It is really astonishing how he is able to do this single-handedly, considering the enormity of the task itself as well as Srila Prabhupada’s ceaseless travels and other multifarious activities in the service of the Lord.

“So far twenty-eight volumes of this most beautiful literature on God have been brought out by ISKCON, and the rest are under preparation. The publishers have seen to it that the printing, format, and pictures are of the highest quality, so that they serve as an ornament to the divine contents of the books.

“The people and leaders of every country, race, and community in the world now have a rare opportunity to understand the glorious science of God and follow it for their own perfection. I would say that this encyclopedia of spiritual knowledge is more important and fundamental than the encyclopedia of any other branch of knowledge. It should, therefore, find its rightful place not only in the libraries of educational institutions but also in every household, and above all, in the hearts and minds of every man and woman.”

The ceremony featured a Vedic fire sacrifice and chanting of ancient hymns and mantras. In addition, each of the two hundred guests received a garland of Hawaiian flowers, and at the end of the ceremony fragrant flower petals showered the newlyweds.

Bhusaya and Lekhasravanti plan to stay active in the Detroit center’s preaching programs, and they spoke briefly about the wedding and their involvement in the Krishna consciousness movement. Bhusaya noted that fewer and fewer of today’s young people regard marriage as a sacred obligation. Then he said, “We would like to show that if you put Krishna (God) at the center of your married life, you’ll have a harmonious, lasting family situation that grows in meaning. Lekhasravanti and I decided that we could help each other advance in Krishna consciousness and also help others see how a married couple can cooperate for spiritual progress.”

“My father was always talking about human dignity,” Lekhasravanti observed. “So in one sense Bhusaya and I are working for the same goal: awakening people to a higher awareness of themselves. But we want people to know that they’re really spiritual beings.” Explaining the wedding’s opulence, Lekhasravanti said, “We don’t try to attract attention to ourselves—we do everything nicely, just to please Krishna.”