Back to Godhead > Prabhupada > Do We Have to Believe Darwin?

Do We Have to Believe Darwin?

Do We Have to Believe Darwin? 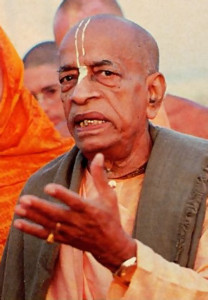 The following conversation between His Divine Grace A.C. Bhaktivedanta Swami Prabhupada and some of his disciples took place in October 1975 during an early-morning walk in Durban, South Africa.

Devotee: It only happened once, and that was enough to start the whole thing.

Srila Prabhupada: Only once? Another rascaldom! We see the flowers and fruits are coming every season. Why once? This is dogmatic. Do we have to accept it? Our experience is that, by nature’s way, the same flower is coming again in the same field,

Devotee: Well, actually Darwin said that there is a missing link.

Srila Prabhupada: What is that missing link? Simply bluffing, and it is going on in the name of science. Just see the fun. Simply misleading, and people are such rascals—civilized man, so-called—they are accepting it as a great theory: “Darwin’s theory is a very big discovery.”

Simply childish rascaldom. There is no reasoning. There is no sense. Man came from the monkey, they say. So why is he not coming now?

Srila Prabhupada: “Sometimes”—it is simply for Darwin. To support his rascaldom, nature has to serve him: “sometimes.” Just see. Why should we believe all this? “Sometimes” is not nature’s law. Nature’s law is the same, symmetrical. Nature is not obliged to serve Mr. Darwin. “Sometimes,” he said, and only he knew. The rest of us are simply supposed to believe him. “Sometimes” it was done, and it was revealed to Darwin. How did he come to know? How is it that no one but Darwin could understand?

Devotee: They use the same argument against us: that so few people can understand God.

We don’t accept knowledge like that: “Darwin simply knew it.” No. They are number-one rascals, all these so-called scientists. “There is a missing link. Only once from a monkey, man came.” What is this nonsense? Do we have to believe this? Does it make any sense? But because Mr. Darwin is speaking we are expected to accept it.

Devotee: Certain changes take place. Just like if you’re in a hot climate all the time, your blood thins. If you take that further, all of these changes can mount up to some big physical change.

Srila Prabhupada: No. What change is taking place? In the morning the sun rises on the eastern side. That is going on. The seasonal flower changes according to the season—winter, spring, summer. Everything is going on symmetrically; Because it is going on symmetrically, we can say that next February it will be a nice season here. Why? Because you have your own experience of last February. We are certain that the same thing will happen next February. Therefore we can say, “There is no such change.” This is nature’s way: prakrteh kriyamanani gunaih karmani sarvasah. It is very symmetrical. Everything is going on nicely. Nature’s way.

Devotee: One of the strong points of Darwin’s theory . . .

Srila Prabhupada: I don’t find any. Simply foolishness. [Laughter.] A foolish rascal like you will believe it.

Devotee: They argue that five thousand years ago they had no history. So they think that before that time, there was no civilization. Therefore man was like the monkey.

Srila Prabhupada: We don’t speculate. We have got millions of years of history. A child may think something, but an elderly man will not think like that. Because the rascals are thinking in some way, do we have to believe it? Why should I take their word?

We are taking the word of Lord Krsna. We accept Him as Supreme. All the great sages accept Him. Why should I accept this rascal Darwin? We are not so foolish. We cannot accept.

Devotee: The scientists always say, “Last year we made a mistake, and now it’s all right.”

Srila Prabhupada: Hmm. “Now we are advanced.” And what is the guarantee that your present theories are correct? You will advance again. That means you are always incorrect.

You say that by chance man came from nature. But you don’t find nature working by chance. Therefore your theory is disproved. If your calculations have even one error, then your whole statement must be accepted as nonsense.

Devotee: People think that life is always getting better.

Srila Prabhupada: Therefore, they are rascals. This is called maya [illusion]. They remain rascals, and still they think they are advanced.