Back to Godhead > ISKCON > News > Festival of India Tours U.S. 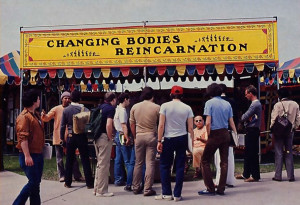 At a campus in Buffalo, New York, students at the Festival of India hear about reincarnation, one of the many philosophical and cultural themes being presented by means of portable exhibits.

Manhattan, New York—Many residents here have noticed a large, yellow tractor-trailer cruising about town this summer. The logo/banner on both sides of the trailer, complemented by emerald-green pinstripes, reads “Festival of India.” The trailer contains sculptural and photographic exhibits, brightly colored tents, a public address system—in short, a portable festival—which Madhuha dasa and a dedicated crew of ISKCON devotees have set up in the city’s parks this summer.

“Festival of India” is a dramatic presentation of ISKCON’s cultural and philosophical heritage. Exhibits on vegetarian cooking, reincarnation, spiritual education, and karma—to name a few—attract thousands of New Yorkers to the festival tents. “Srila Prabhupada told us on many occasions,” says Srila Ramesvara Swami, one of ISKCON’s spiritual masters in charge of its affairs in New York, “that America can be enlightened by cultural presentations.” The unique position of the Vedic culture—the culture in which ISKCON has its roots—is that it imparts to its participants and observers the eternal truths of factual spiritual life. The difference between the body and the soul, the relation of the soul to the Supreme Soul, and the perfection of that relation are all subject matters that are readily understood by anyone in contact with the Vedic cultural milieu.

ISKCON has established many cultural exhibits across North America, as well as in Europe, India, and other parts of the world. The recently opened Bhaktivedanta Cultural Center at the former Fisher mansion in Detroit, Prabhupada’s Palace of Gold in West Virginia, and the original FATE diorama museum in Los Angeles are major cultural showpieces for ISKCON in the United States.

The “Festival of India” contains all of the same cultural themes in a traveling package. For four years Madhuha and his crew have traveled across the United States and Canada setting up the displays in parks and city squares and at schools and colleges. Last spring they visited Yale, Rutgers, Wesleyan, and SUNY campuses in Albany, Buffalo, and Binghamton. This summer they have appeared at the Albany Empire State Plaza, the Central Park Band-shell, Flushing Meadow Park, and the New York Coliseum.

One of the largest exhibits in the festival, entitled “Who is Prabhupada?” features many beautiful photos and paintings of ISKCON’s founder, illustrating his life and accomplishments. Srila Prabhupada first arrived in New York City in the fall of 1965, bringing with him his translations of Srimad-Bhagavatam—the topmost Vedic scripture—and an ardent desire to transplant India’s ancient Krsna conscious culture in the West. “Festival of India” continues to fulfill Srila Prabhupada’s desire in a unique and dynamic way. 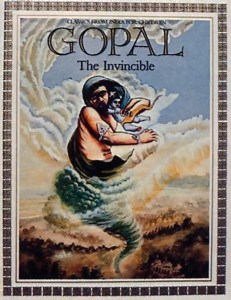 Brooklyn, New York—The pastimes of Krsna are now available in six languages for young readers. Bala Books, publishers of Krsna conscious books for children, has just announced the publication of Gopal the Invincible. Yogesvara dasa and Jyotir-mayi-devi dasi wrote the text for this handsome, hardbound edition, which contains full-color illustrations by Sunita-devi dasi. The book is available in English, French, Spanish, Italian, German, and Dutch.

The book is the first in a series of multilingual printings under the series title “Classics from India for Children.” The inspiration for a library of children’s books came from Srila Prabhupada, who requested Yogesvara to make the timeless stories of the Vedas available to young people worldwide.

Five thousand copies of Gopal the Invincible were printed in each of six languages. The book tells of child Krsna and His victory over the many nefarious demons who tried to disturb the peaceful life of Vrndavana, Krsna’s cowherd village.