Back to Godhead > ISKCON > Temples > Krsna-Centered Life In Los Angeles

The Krsna-Centered Life In Los Angeles

The Hare Krsna community in L.A. offers
the perfect example of God-conscious living
in a highly urbanized setting. 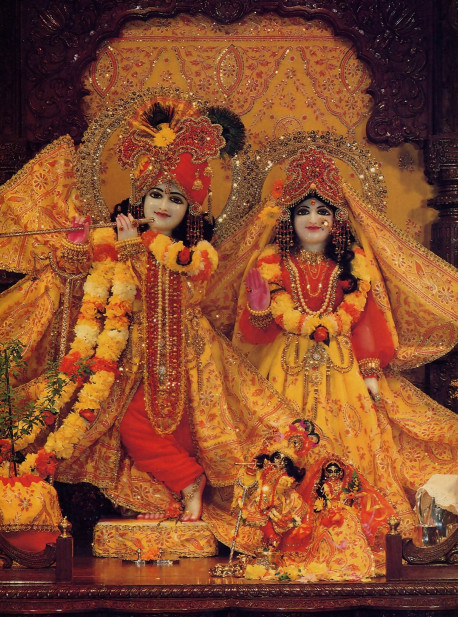 The center of all activities at the Los Angeles temple, Their Lordships Sri Sri Rukmini-Dvarakadhisa, preside from Their teakwood-and-marble altar. 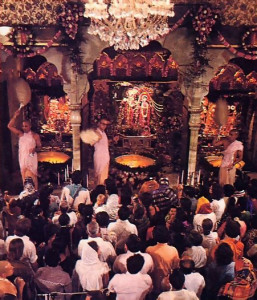 At an arati ceremony, guests and life members chant and dance before the Deities.

Early in the morning, an hour or more before the sun rises, several hours before traffic begins to jam the city freeways. and while most residents of Los Angeles County, California, are soundly sleeping, a small Los Angeles neighborhood is entering upon a new day. At 4:30 am. the ornate, high-ceilinged temple room of the Hare Krsna center at 3764 Watseka Avenue resounds with the playing of drums and cymbals as four hundred men, women, and children, wearing bright, clean cotton dhotis and saris, gather to sing the holy names of God and dance before the Deity forms of Sri Sri Rukmini-Dvarakadhisa. Despite the predawn hours, visitors often show up to join the daily service, staying for mantra meditation, the class on the ancient Vedic science of self-realization, and the sumptuous vegetarian breakfast. 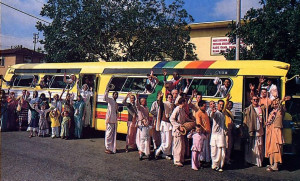 The temple bus brings the chanting of Hare Krsna to all corners of Los Angeles.

In fact, the Los Angeles center of the International Society for Krishna Consciousness (ISKCON) is especially geared toward welcoming visitors and introducing them to the simple, joyous life of Krsna consciousness. Visitors to Los Angeles ISKCON observe firsthand the great variety of Krsna conscious activities here, and if they like, they can participate in those activities. The Bhagavad-gita says that whatever we do should be done as an offering to the Supreme Personality of Godhead Krsna; this frees us from the anxiety of material life and reestablishes us in our eternal, loving relationship with the Supreme Lord. 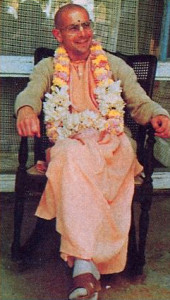 Srila Ramesvara Swami, the spiritual master in charge of ISKCON Los Angeles, is a pioneer in spreading Krsna consciousness through book publication and distribution

A reception center within the temple complex opens at 9 a.m. and features free refreshments, Krsna conscious literature, and video shows from ISKCON Television (ITV). The reception center is actually the home of Rama Raghava dasa and his wife, Satarupa-devi dasi, who take charge of welcoming guests. “My idea,” says Rama Raghava, “is to give every guest a proper greeting and show him the home where my wife and I live. In that way he sees a nice family and home that are centered on Krsna.” At five-thirty each evening Rama Raghava and Satarupa serve a seven-course dinner to as many as fifty guests and invite them to attend the evening worship at the temple. 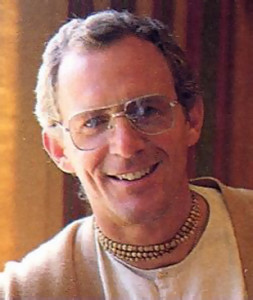 Vatsala dasa, temple president , assists in coordinating the Los Angeles center, a complex spanning more than half a city block.

Visitors can tour the temple museum, which houses lifesize dioramas depicting episodes and philosophical concepts from India’s ancient Vedic literature. The dioramas, sculpted and painted by ISKCON artists in three Los Angeles studios, are integrated with special lighting effects, 35 mm. slides, a stereophonic soundtrack, and solid-state circuitry. Smaller dioramas have been sent to ISKCON projects around the world for devotees to use in explaining the Krsna consciousness philosophy. Artists in Los Angeles have also produced hundreds of paintings to illustrate the Vedic texts translated by ISKCON’s founder and spiritual master, His Divine Grace A.C. Bhaktivedanta Swami Prabhupada. 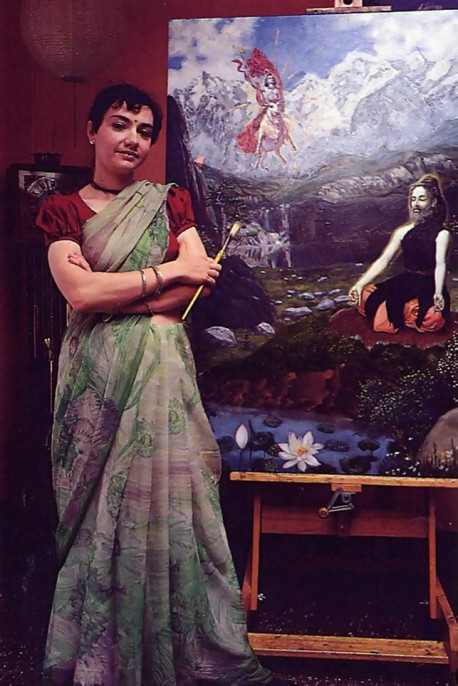 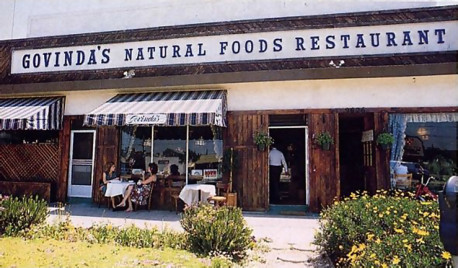 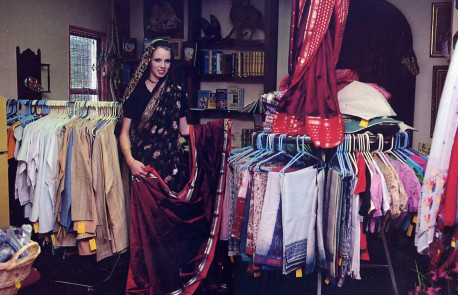 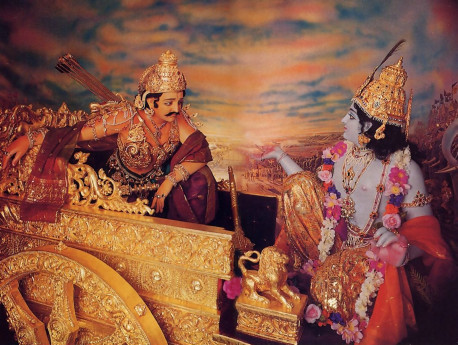 “Krsna and Arjuna on the Battlefield”, a diorama at the temple museum, brings to life the Bhagavad-gita’s famous conversation on self-realization. 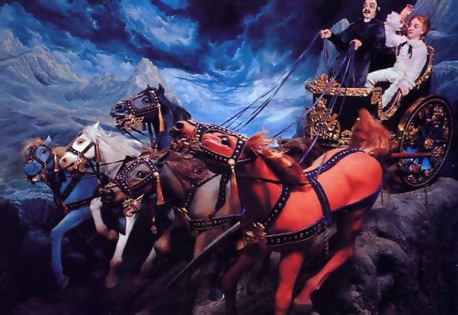 Another diorama, “The Chariot of the Body”, illustrates a Vedic analogy: the body is like a chariot, and the soul, or self, is the passenger. When an individual’s senses are uncontrolled, they carry him away like wild horses. 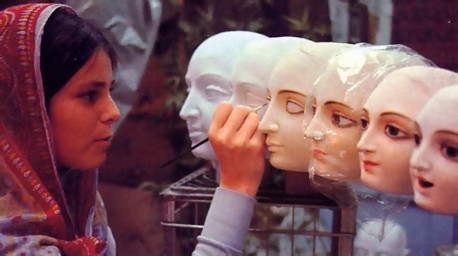 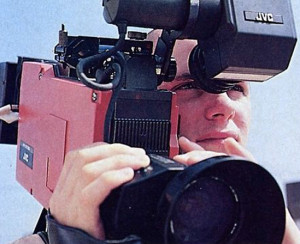 ISKCON Television produces a variety of shows dealing with the philosophy, practice, and culture of devotional service to Lord Krsna. Right, a cameraman readies to shoot.

More interested visitors can keep in touch with temple activities through the Friends of Lord Krsna (FOLK) program, which numbers almost four thousand members. FOLK members receive books and a monthly newsletter. The Los Angeles FOLK program recently sponsored a four-day Bhagavad-gita seminar in Hawaii, where guests enjoyed sailing aboard the Jaladuta II, ISKCON Hawaii’s teakwood ketch, and touring the ISKCON farm. Programs like this allow FOLK members to see for themselves how ISKCON is operating all over the world. Jagaddhatri-devi dasi, head of the FOLK program, is planning further excursions to ISKCON centers in Detroit; Washington, D.C.; and West Virginia. “This FOLK program enables people to identify themselves as devotees of Krsna,” says Jagaddhatri. “Srila Prabhupada said that only a small number of people will actually move into our temple communities. So the FOLK program is organizing a Krsna conscious society outside the temples.” 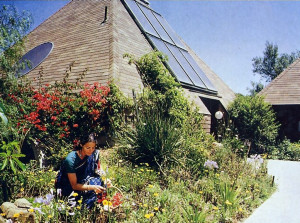 In addition to FOLK, a Life Membership program has enlisted the generous support of three hundred families from the Los Angeles Hindu community. Recognizing ISKCON devotees as authentic representatives of the devotional tradition followed by millions of Indians, these life members regularly attend temple services to worship Sri Sri Rukmini-Dvarakadhisa. On special festival days, as many as four thousand Indians come to offer respects to Rukmini-Dvarakadhisa and to feast on delicious krsna-prasadam, food offered to Lord Krsna. Life members are also enthusiastic participants in the Festival of the Chariots at Venice Beach, where every August as many as two hundred and fifty thousand people gather to watch a parade featuring three forty-five-foot-high silk-canopied carts. Introduced to the West by Srila Prabhupada in 1967, the festival has been celebrated in India for thousands of years. 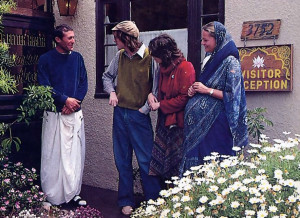 Rarna Raghava and his wife, Satarupa, provide a warm welcome at the reception center on Watseka Avenue

Krsna-prasadam is the main attraction at Govinda’s Natural Foods restaurant, located on Venice Boulevard, across from the temple. The restaurant has received enthusiastic reviews from major local papers and magazines and enjoys capacity crowds every day of the week. Devotees prepare and serve hot and cold sandwiches, fresh pastries and desserts, a variety of natural drinks, and full-course dinners featuring Indian, Mexican, Greek, and French dishes—all vegetarian. Govinda’s hosts actors and other employees from nearby MGM studios and, being the vegetarian restaurant closest to the Los Angeles Olympic Stadium, has made arrangements to accommodate many additional customers this summer. 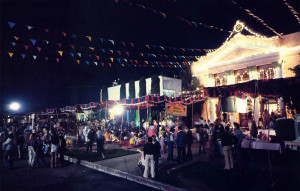 Devotees and guests mingle in front of the temple during the celebration or Janmastasi, Krsna’s appearance anniversary.

Devotees distribute prasadam and Krsna conscious literature throughout the Los Angeles area. Vatsala dasa, the temple president, coordinates all the community’s activities and oversees the distribution of books and prasadam at Los Angeles International airport, Griffith Park Observatory, the zoo, and California highway rest stops. The Los Angeles temple distributes more of Srila Prabhupada’s books than any of the fifty other temples in North America. 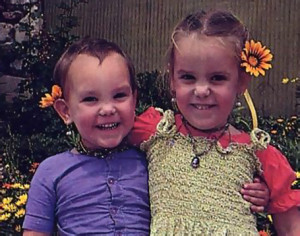 Devotee children. At age rive, they will go to school at Bhaktivedanta Village, a rural ISKCON project two hundred miles north or L.A.

Vatsala also directs Krsna conscious programs at UCLA and California State University, where Krsna clubs meet once a week to discuss the Bhagavad-gita, chant Hare Krsna, and learn how to cook krsna-prasadam. The cooking classes, attended by between thirty and fifty students, are followed by a multicourse vegetarian feast of prasadam, food first offered to Krsna.

Under the direction of Srila Ramesvara Swami—one of the present spiritual masters in the Hare Krsna movement and the director for ISKCON’s activities in the western United States—the Los Angeles devotees distribute Krsna consciousness not only in their immediate area but all over the world. The L.A.-based ISKCON Educational Services, for example, mailed out thirty thousand free books in 1983 to all parts of the world. 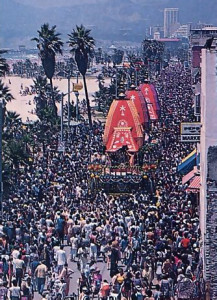 Hundreds or thousands join the annual Festival or the Chariots parade (Ratha-yatra) at Venice Beach.

A dynamic organizer and speaker (please see article on page 24), Srila Ramesvara Swami is pioneering the use of video and other high-tech equipment to publicize the Krsna conscious way of life. With his enthusiastic support, ISKCON Television, which often films in L.A., has produced over 150 programs in the past five years. Devotees conceive, write, shoot, and edit the programs, which are distributed to a worldwide network of 140 temples and asramas as well as to universities and schools.

To inform the media of the worldwide activities of the Hare Krsna movement, the ISKCON Public Affairs office in Los Angeles sends regular newsletters’ to seven thousand media professionals in North America. Mukunda Goswami, director of the public affairs office, is also the initiator of “Hare Krsna Food for Life,” a world-wide service to feed the needy.

With so much time and energy dedicated to introducing others to Krsna consciousness, you might think the Los Angeles devotees have no time for themselves. The devotees would answer, however, that every person is part and parcel of Krsna, just as leaves and branches are part and parcel of a tree. In the same way that watering the root of a tree nourishes all the leaves and branches, pleasing Krsna benefits everyone, including yourself. Since nothing we can do for Lord Krsna is more pleasing to Him than when we help others reawaken their love for Him, the devotees experience an ever-increasing reciprocation with the Lord as they introduce Krsna consciousness to others. That reciprocation is the only complete satisfaction for the self.

The devotees, therefore, are simultaneously selfless and self-interested. Even while caring for their families or tending their own basic needs, they keep their lives centered on service to the Supreme Lord. Such a completely God-centered spiritual existence is possible for anyone who learns the sublime and time-tested science of Krsna consciousness; and the Los Angeles Hare Krsna temple is an ideal place to learn.

One Response to Krsna-Centered Life In Los Angeles