Back to Godhead > Society > Peace > “There Cannot be Any Peace”

“There Cannot be Any Peace”

Because our leaders don’t know the root cause of war,
they dare to assure us that a nuclear holocaust
is too horrible to happen. 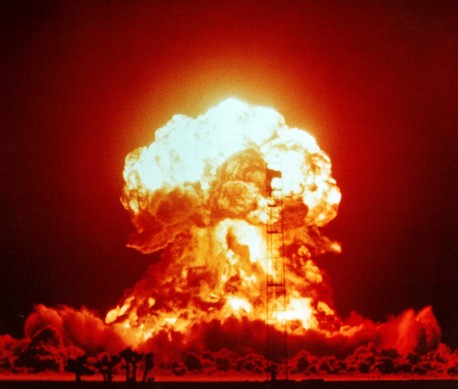 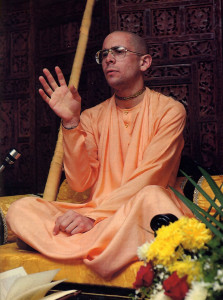 Practically all of America has been forced to think about the likelihood of nuclear war. Of course, our materialistic leaders have tried to convince us that there is really nothing to worry about, because they have this wonderful materialistic formula that prevents nuclear war by making it too horrible. If you happen to watch any of these leaders making their presentation, it is somewhat convincing. However, it is fully convincing only to one who has a very limited vision of material existence and the laws of material nature.

Each of us has a permanent and real self—the atma, or soul—that is within the temporary material body and that uses the body to fulfill its desires. Unfortunately, in this materialistic society our desires focus not on satisfying the real, inner, spiritual self but on exploiting the material world’s resources and so gratifying our material body—the outer, illusory self. In other words, right now our desires are based on illusion because they’re based on an illusory concept of self, the bodily concept. Now, from this false, bodily concept springs false proprietorship. Simply because my body has some little, temporary sway over some part of the material world, I desire to be the owner of this part of the material world. But the material world existed long before I had this body. And after my material body is finished, the world will continue to exist. Yet in the interim, I desire to be the owner. This desire for false proprietorship—again, based on the false, bodily concept of who we are—causes quarrel and war.

As we would expect, people who have the bodily concept will do virtually anything to gratify their body—even to the point of inflicting pain and suffering on other creatures. If your body is the most important thing in the world to you, then logically, to gratify your body you’ll even do something that may harm someone else. And to extend your bodily gratification, you’ll work to gratify the bodies of your “fellow citizens,” people who sport the same national bodily designation—even though you may bring harm to “foreigners,” those of other bodily designations.

Now, from the sages of India and from the Vedic literature we learn that the creator and director of the material world has established laws that govern the world. And these laws are inviolable. But just for their bodily gratification, people have engaged in tremendously harmful transgressions of these natural laws. And so these transgressions must bring reactions. The laws of physics, we know, are based on this principle of action and reaction. And the same principle governs the interaction of living beings. We call this principle the law of karma.

To sum up what we’ve touched on thus far, the human beings in today’s world have the bodily concept of self, which forces them to try lording it over the earth’s resources and use these for their own bodily gratification—which forces them to engage daily in a whole series of very violent and condemned activities that bring severe karmic reactions down on everyone.

And even if we do not notice our transgression of Nature’s and God’s laws as we go to the local steakhouse or cook flesh in our homes, Nature notices and God, or Krsna, notices. Nature is noticing that though she has worked so hard to produce these material bodies so that certain souls can live in certain species of life, nonetheless the humans have organized gigantic concentration camps in which thirty million animals and birds are systematically exterminated each day—our “final solution” for these inferior races of creatures. And this is happening on a global scale. Nature is producing these material bodies, and humans are disrupting Nature’s work by yearly destroying so many of Nature’s creatures.

Still more, human beings have decided, for economic reasons, business reasons, personal reasons, that it has become largely incompatible with their “lifestyle” to bear children. In other words, people want to have unrestricted sex without having to accept the natural consequences. Engaging in sex almost inevitably results in children, no matter how hard modern science tries to find ways to prevent children from being conceived. So scientists have been called upon to alleviate this messy problem. And these learned men have invented the methodology by which the child can be killed while he’s living inside the womb of the mother. And this technological breakthrough has been exported to practically every country in the world. Each year, all over this planet, nearly sixty million of these child murders are taking place. And these child murders have been endorsed by nations all over the world, even India.

So here we have the root cause of quarrel and war. Due to our false bodily concept and our desire for false proprietorship, the human society resorts to violence, and by the higher laws of Nature, known as the laws of karma, society has to undergo similar violence. There cannot be peace. There has to be scarcity, and epidemics, and war, and tornadoes, and earthquakes. And although modern man would like to regard these things as accidents, he should know better. Human life is meant for understanding that these things have a cause—that the entire universe is based on the principle of cause and effect, or action and reaction. Any educational system, however grand and elaborate it may be, is a failure if it doesn’t impart this understanding.

So when we hear our materialistic leaders saying, “There couldn’t possibly be a nuclear war because we’ve made it just too horrible,” we know better. “We’ve made so many weapons that nuclear war would be just too horrible,” our leaders say, “so therefore there won’t be a nuclear war.” This type of reasoning, which sounds so sophisticated when you hear the Kissingers and the rest mouthing it on television, is actually very naive. As we’ve noted, it comes from a limited vision of life and the universe and the laws that govern the universe. “We don’t have to stop our sins; we have this theory that we can stop the reactions of these sins from coming.” Anyone with any real knowledge of God’s laws knows that if a person is engaging in violently sinful activities, these will create reactions that no material formula can stop.

At present the whole society is organized around this: how to get you into the bodily concept, how to get you very attached to it. And when you’re attached to it, what do you do? Engage in sinful activities. You’re going to control the world for your bodily gratification. You’re going to murder your baby. You’re going to eat flesh. “It’s very important to kill those babies, and it’s very important to kill those animals. Because that’s how we gratify our bodies.” This is the way a person in the bodily concept thinks.

So it’s not at all reassuring to us in the Krsna consciousness movement when we see the leaders of the world going on television and telling everybody, “You don’t have to worry about nuclear war, because we’ve made it so horrible that there won’t be a war.” This is not reassuring to us at all. If only they would go on television and say, “We’re going to stop killing babies, and we’re going to stop killing animals. This is our peace formula. We will not have a nuclear war because we’re going to stop killing all these babies and animals.” When we finally acknowledge the sacredness of all life, the result will be that God will grant us peace. But if we remain warlike and violent toward all forms of life, how can the karmic reaction be anything but war and violence upon ourselves? How is Nature going to let us get away with murdering six hundred million babies and a hundred billion animals every ten years? How do we suppose we’re going to get away with that? How dare we think that we can do this with impunity—and have our leaders come on the TV and soothe us by saying, “We’ve made war too impossibly horrible—that’s the peace formula.”

Only a fool will accept this type of propaganda. So there is a type of folly and hypocrisy even, for instance, in the nuclear freeze movement. These people seem very well intentioned. They want peace and they’re praying for peace and marching for peace. But they themselves may be murderers of babies and animals. So first they have to make their own hearts peaceful. First they have to get rid of all the violence from their own hearts. Otherwise, what is the use of their marching for peace? God is not going to respond to their prayer for peace, because right afterward these same people are going to McDonald’s or Burger King or Planned Parenthood or the abortion clinic.

To sum up, there is an actual peace formula, and it begins with an understanding of the difference between the actual self and the temporary body. We have to become liberated from this bodily concept or there’s no question of peace. We actually have to learn, “I am not this body. I am not these bodily designations—’American,’ ‘African,’ ‘Indian,’ ‘Russian’; ‘black,’ ‘white,’ ‘yellow,’ ‘red’; ‘man,’ ‘woman,’ ‘child’; ‘young,’ ‘old.’ I am something more than this. Therefore I should not act as if I were just this body. I should learn what it means to be a spirit soul. And what it means to act as a spirit soul.” Only then can we have real compassion and put an end to the gross violence that exists in this present so-called civilized world.

So this knowledge about the difference between the soul and the body and how to act as a liberated soul rather than as an illusioned soul—this is the fundamental education that is required if there’s actually going to be peace on earth. And the Krsna consciousness movement is dedicated to making this spiritual education available to all people—whatever their culture or religion or race or creed or nationality or gender—precisely because we do not see the living being in terms of these bodily designations.

If people adopt these spiritual principles, they can free themselves from the violent reactions of karma that are practically just around the corner. Of course, we do not believe in the doomsday scenario, wherein the human race is exterminated.

So to start with, we recommend that you read the Bhagavad-gita and Srimad-Bhagavatam. Anyone who reads this literature will be enriched with spiritual knowledge and will understand how to act in harmony with the laws of God rather than transgress them. And not only that. This literature reveals how you can free yourself from whatever karma you have created before—whether in this life or in past lives. You can learn this ancient spiritual science of Krsna consciousness through accepting prasadam, vegetarian foods offered to Lord Krsna; and through reading the Bhagavad-gita and Srimad-Bhagavatam, knowledge spoken by and about Krsna; and through chanting the holy names of Krsna: Hare Krsna, Hare Krsna, Krsna Krsna, Hare Hare/ Hare Rama, Hare Rama, Rama Rama, Hare Hare. And we invite you to come as often as you like to these Hare Krsna centers. They are open to everyone, so that everyone can revive his spiritual consciousness and become free from the bodily concept—and from the karma leading to nuclear war.