Back to Godhead > Prabhupada > Srila Prabhupada Speaks Out on Modern Civilization 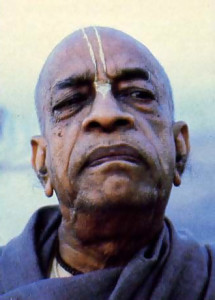 The following conversation between His Divine Grace A.C. Bhaktivedanta Swami Prabhupada and a life member of the International Society for Krishna Consciousness took place in August 1976 on an early-morning walk in Hyderabad, India.

Member: What is your view on birth control by contraception?

Srila Prabhupada: That is the most sinful activity. Birth control should be done by restraining sex.

Member: That is one way.

Srila Prabhupada: That is the only way approved in the sastra [scriptures]. All other ways are sinful.

Member: But people are committing sinful activities like contraception and abortion. What will happen to them?

Srila Prabhupada: They will suffer. Those who are killing children in the womb will themselves be killed. They will enter into a mother’s womb and be killed. They will be punished, tit for tat. But that they do not know. These rascals have no education about the laws of nature. They’re acting very independently, but Krsna says in the Bhagavad-gita [3.27], ahankara-vimudhatma kartaham iti manyate: Those who think they can act independently of nature are vimudhas, rascals. They will be punished by the laws of nature, just like a thief who defies the laws of the government.

Member: What is the qualification of someone fit to have children?

Srila Prabhupada: The husband and wife should not have a child unless they can take full responsibility for saving him from the repetition of birth and death. This is the sastric injunction—pita na sa syaj janani na sa syat . . . na mocayed yah samupeta-mrtyum. In the material world everyone is rotating in the cycle of birth and death, transmigrating from one body to another (tatha dehantara-praptih). And after many millions of years, one gets the chance to become a human being. Now, in this life, one can stop birth and death. That is Vedic culture—learning how to conquer the process of repeated birth and death (punar-janma-jaya). But that is possible only in human life. So the parents’ duty is to train their children in such a way that their present birth is their last. And that training is Krsna consciousness.

Unfortunately, people are ignorant of this science. So both parents and children are staying in the cycle of birth and death and wasting the opportunity of having a human body. This is modern civilization. People do not know this science; they are kept in darkness. Their so-called education is useless, because they do not learn what the destination of life is (na te viduh svartha-gatim hi visnum).

Practically speaking, there is no education. The modern so-called education teaches you how to eat nicely, how to sleep nicely, how to have sex nicely, and how to defend nicely. And that is the business of the animals. They know how to eat, how to sleep, how to have sex, and how to defend. So the extra intelligence of the human being is making a deluxe edition of eating, sleeping, sex, and defense. The modern civilization is a deluxe edition of animal life. That’s all.

Member: But many people would insist that the material progress of present-day society makes life worthwhile.

Srila Prabhupada: What will you do with your material progress at the time of death? Suppose you have a big bank balance, a nice house, good friends. At any moment death can come and kick you out. What can you do? Mrtyuh sarva-haras caham: as death, Krsna will come one day and take everything you have. Finished. And He may make you a dog. Now bark. How can you stop it? You have practiced how to bark in the legislative assembly. Now become a dog and go on barking—yow, yow, yow! This is going on.

No one knows the purpose of life. As Krsna says in the Bhagavad-gita, asatyam apratistham te jagad ahur anisvaram. People are claiming this world is false (asatyam), there is no cause (apratistham), there is no God (anisvaram). So the modern civilization denies God, yet it is still trying to mitigate the miseries of life. But Bhagavad-gita proposes that first of all you should try to understand what your real misery is. Do you know what the real misery of your life is? What is the misery of your life?

Member: The misery of life is to live without divine knowledge.

Srila Prabhupada: Yes. The real misery of life is that while you are an eternal soul, with no birth or death, you are suffering repeated birth and death of the body. Therefore birth and death are your real miseries (janma-mrtyu-jara-vyadhi-duhkha-dosanudarsanam). This is knowledge.

But people have no brain to understand these things. Krsna clearly says, na jayate mriyate va: “For the soul there is neither birth nor death.” But the rascals never think, “Why am I suffering birth? Why am I dying?” Where is their education? They are struggling to get free of misery, but they don’t know what their actual misery is. They foolishly engage in the struggle for existence and hope for the survival of the fittest.

Member: The theory of the survival of the fittest may be applicable in our case because fit means—

People have no brain to solve this problem, although there is a solution. Tyaktva deham punar janma naiti mam eti: Krsna says in Bhagavad-gita that if you understand Him in truth, you can get out of the cycle of birth and death and go back to Godhead—no more birth and death.

One Response to Srila Prabhupada Speaks Out on Modern Civilization