Back to Godhead > Devotees > Preaching > Art > Every Town and Village 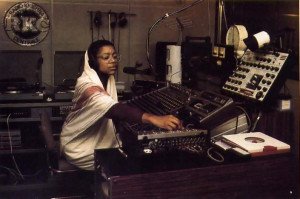 One of the most popular shows, Beati Voi, fills the air waves for three hours every afternoon. Krsna Caitanya plays cuts from popular songs, movies, or TV shows and then gives a Krsna conscious commentary. Other regular features include a show for children, a course on Vedic cooking, and classes on the Bhagavad-gita.. 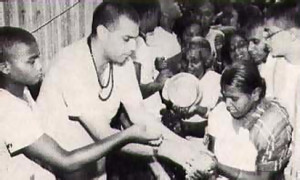 Panihati, West Bengal, India—Each year just before spring begins, tens of thousands of pilgrims flock to this village on the Ganges to observe a festival called the Cida-dadhi Mahotsava. This celebration, commemorating a similar one five hundred years ago, features a bath in the sacred Ganges and the partaking of chipped-rice-with-yogurt (cida-dadhi) that has been first offered to Krsna.

This year the ISKCON devotees were at the festival, distributing the chipped-rice-with-yogurt free to thousands. The devotees also erected a huge tent, where Srila Jayapataka Swami, one of the spiritual masters in the Hare Krsna movement, sang Bengali songs glorifying Krsna and spoke on Krsna consciousness by the hour.

More than two thousand people came forward to enroll in the movement’s Nama-hatta program, thus joining thousands of other Bengali villagers who have agreed to chant the Hare Krsna mantra on beads every day and follow basic devotional principles.

Washington, D.C.—On August 21 the Washington Monument, site of massive peace and civil rights demonstrations in the 60’s, became the site of the world’s most famous religious celebration—Ratha-yatra, the Festival of the Chariots. Devotees from the Potomac, Maryland, Hare Krsna center organized the event with the help of others from centers throughout the Northeast.

At noon, three colossal chariots bearing the Deity forms of Lord Jagannatha, Lord Balarama, and Srimati Subhadra began rolling down the Washington Mall amid a sea of dancing devotees chanting the Hare Krsna mantra. From the Capitol building the parade went along the 1.2-mile route to the spectacular festival grounds at the Washington Monument.

Featured at the festival were world-renowned Indian classical violinist L. Subramaniam and tabla drum player Alia Rakha, plus a full-course feast of vegetarian food offered to Krsna and a broad array of cultural displays: video shows, fine art and sculptural exhibits, photo and philosophy panels, and a special booth dedicated to the festival’s theme—”World Peace Through Krsna Consciousness.”

New Vrindaban, West Virginia—The Holiday Inn in nearby Wheeling is now promoting a tour package that includes admission to Prabhupada’s Palace of Gold, the memorial the devotees here built for the founder and spiritual guide of the Hare Krsna movement. The package also covers lunch at the newly opened Palace restaurant.

West Virginia’s officialdom has also recognized the Palace. The state’s Travel Development Department recently announced that last year only four other attractions in West Virginia drew more visitors. And in a meeting with Mahabuddhi dasa, the general manager of the Palace, Governor John D. Rockefeller IV said, “I have no doubt now of the tremendous drawing power the Palace of Gold has for tourism in West Virginia.” The governor backed up his praise with a pledge to push for much-needed repairs on New Vrindaban’s main road.