Freedom of Religion — A Spiritual Challenge for Hare Krishnas

Nescience News and Our Retort

American media try to cover the quest for spiritual understanding. 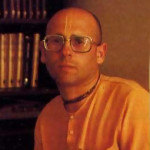 When ecstatic devotees of Lord Krsna dancing on the sidewalks of New York danced onto the cover of the July 5 U.S. News & World Report, the headline warned, “America’s Cults—Gaining Ground Again.”

Of course, journalists don’t expect people to know much about spiritual science. And any attempt to explain things in depth, they must figure, would leave most people behind. So they just trot out that old pejorative cult and treat readers to a blow-by-blow of how various religious “cults” try to get along peacefully with their neighbors.

In keeping with all this, U.S. News sails right past the philosophy of the Hare Krsna movement and focuses on “a fragile truce” between the members of the movement’s New Vrindaban community in West Virginia and Sheriff Robert Lightner, who doesn’t like people to shave their heads and wear long robes. “When the founding fathers wrote about freedom of religion,” he says, “they didn’t have people like these in mind.”

By now we’ve come to expect such trivia when great national news magazines like U.S. News cover spiritual topics. Example: U.S. News tells us that the followers of the Rev. Sun Myung Moon are grossing millions of dollars through their seafood business. And the important thing here is the money. Forget that slaughtering millions of innocent creatures—fish—may not be a very spiritual act, nor a symptom of saintly behavior. Overlook the hypocritical spectacle of a so-called messiah organizing an industry for wholesale killing. What matters to the writers of U.S. News is the profit turned over. Such are the issues of the day.

And superficiality is by no means restricted to journalists. America’s leaders—whether in the media, politics, economics, psychology, sociology, education—are virtually all ignorant of God and His laws. Even religious leaders just can’t seem to muster a scientific understanding of God: witness the recent attempts of Christian “scientific creationists” to impose their medieval religious views on the Arkansas public school system.

Krsna consciousness, however, does present scientific information about God, information gleaned from a vast Vedic literary tradition covering five thousand years of scriptural revelation. Unfortunately, most people are not interested in this information. They are satisfied with trying to save their own necks through their salvation-obsessed mainstream religions or to fashionably remain members of a spiritually impotent community church or synagogue.

The “American way” has become to enjoy life and forget God. If we do think about God, it is often simply to relegate Him to the post of order supplier. Yet contrary to the megalomaniacal fantasies of the human race. God is not a mystical appendage to human prosperity. God is not a humanist, and we are not the center of the universe. God is the center. He is the supreme enjoyer, the controller of all that be. The human being’s natural occupation is to serve Him. And to serve Him means to carry out His will, which is not always identical with sentimental humanism.

Modern men, however, foolishly try to invoke God’s mercy upon their material, bodily ambitions. When “religious” people speak of the kingdom of God, they generally describe an earthly kingdom extended into the hereafter. Few people seem interested in recognizing their true existential relation with God as His eternal loving servants. Despite outward protestations of faith in God, most of us live a life of materialism.

As sincere Americans face the all-devouring spiritual vacuum called modern society, it is no wonder they seek relief. Those who join Krsna consciousness are fortunate to find a bonafide spiritual shelter in an authorized science of God.

If the journalists for U.S. News had examined the spiritual substance of the Krsna consciousness movement, they might have learned something worth getting across to their millions of readers. Instead, they merely contributed to the spiritual sterility of American life by thin coverage of people’s search for spiritual understanding.

Spiritual understanding is life’s deepest need. And many religious movements today have come forward to cater to that need. But when leading American magazines merely peer at the outside packaging without trying to understand the spiritual substance inside (or the lack of it), these magazines unwittingly weaken our sense of spiritual discrimination, thus nurturing the problem for which they want to sound the alarm: the growth of so-called religious movements founded on speculation, whim, concoction, and fraud.