Back to Godhead > Devotees > Akincana Krsnadasa Babaji Maharaja Passes Away 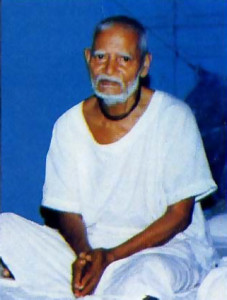 On April 12, 1982, at about 8 p.m., Akincana Krsnadasa Babaji Maharaja passed away from this world. A pure devotee of Lord Krsna, he was a disciple of Sri Srimad Bhaktisiddhanta Sarasvati Goswami Maharaja. Thus he was also a Godbrother of His Divine Grace A.C. Bhaktivedanta Swami Prabhupada, the founder and spiritual preceptor of the International Society for Krishna Consciousness.

Srila Prabhupada himself had spoken of Krsnadasa as niskincana, “having no material attachments,” and paramahamsa, “a swanlike pure devotee.”

In November of 1977, just a few days before Srila Prabhupada himself had passed away, Krsnadasa had come to visit him. Krsnadasa would chant for a while, talk with Srila Prabhupada, and sometimes break into laughter, even while everyone else in the room was somber and silent. Because Krsnadasa Babaji had a transcendental viewpoint, he did not mourn or feel morose; he knew that Srila Prabhupada was always with Krsna in this life and would be with Him in the next.

Krsnadasa Babaji Maharaja was a great well-wisher to Srila Prabhupada’s disciples. And when they would ask him questions, his usual answer was “Hare Krsna, Hare Krsna, Krsna Krsna, Hare Hare/ Hare Rama, Hare Rama, Rama Rama, Hare Hare.” Although highly educated in the schools of his native Bengal and fluent in English, he spoke English only rarely. Mostly, he just kept chanting Hare Krsna.

That Krsnadasa was a babaji meant that he did not actively preach Krsna consciousness, but that he always engaged in devotional service to Lord Krsna, especially by hearing and chanting Krsna’s holy names. He had no disciples, but he was dear to Srila Prabhupada and his disciples and all the devotees of the Lord.

We would see him in Mayapur or Vrndavana, the, holy abodes, of Lord Krsna. He would be dressed in a simple white cloth that reached barely to his knees, and he seemed to have no other worldly possessions. He was always jolly—wherever he was, whatever was going on, his response would be to say, “Hare Krsna, Hare Krsna,” and sometimes laugh, tike a Bengali version of a leprechaun. But when he picked up a drum and began to sing the glories of Krsna, he would play the drum with masterful expertise and sing with intense devotional concentration; his voice expressing his deep inner feelings of love for Krsna. He would go to various places in Vrndavana and sit and chant Krsna’s glories, with tears of ecstatic love in his eyes.

In March of 1981, after a serious illness, Krsnadasa Babaji decided to go to Nandagrama to spend his last days. Nandagrama is the part of Vrndavana to which Lord Krsna, in His pastimes on earth, had been brought by His father for protection from the demonic king Kamsa. On the edge of Nandagrama there is a place called Pavana-sarovara, where Sanatana Goswami, the great devotee of Lord Caitanya, had performed devotional service. This is the place where Krsnadasa Babaji chose to stay.

He asked us to arrange to bring him there from Vrndavana City, and we did so. When we asked him if there was any instruction he could give us, he just laughed and said that his only instruction was to chant Hare Krsna. “That’s all there is.” He didn’t keep a diary, but he kept a small songbook in which he would write notes. On the last page of this book, which was located near his bed, he wrote that the chanting of the holy name of Krsna is the true nectar. The holy name is like honey, he wrote. The last entry in the book was “Hare Krsna, Hare Krsna, Krsna Krsna, Hare Hare/ Hare Rama, Hare Rama, Rama Rama, Hare Hare.”