Srila Prabhupada Speaks Out in the Tuileries Gardens

A Stroll Through the Tuileries Gardens 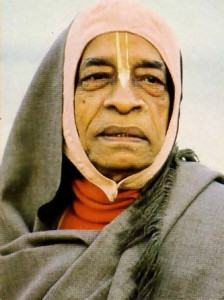 The following conversation between His Divine Grace A.C. Bhaktivedanta Swami Prabhupada and some of his disciples took place in June 1974 during an early-morning walk in the Tuileries Gardens in Paris.

Srila Prabhupada: What do you understand the word maya to mean?

Devotee: Placing value on something without seeing its relation to Krsna.

Seeing something to be disconnected from Krsna is maya, or illusion, because we are forgetting the original reality while taking the reflection to be very important. For example, suppose the sun is reflected in the water and then shines on the wall. If we take the light on the wall to be very important and forget the sun, the original reality, that is maya.

[Srila Prabhupada points to some nearby buildings} These buildings were constructed without any thought of Krsna. but people regarded them with great enthusiasm. Now all that remains are relics. So, the energy expended for manufacturing these buildings is maya, and the enthusiasm people now have for visiting these relics—that is also maya. All these things are expansions of maya, illusion.

Devotee: Parisians might complain that you don’t appreciate the architectural skill that went into—

Srila Prabhupada: No, we appreciate very much the intelligence of the architect, but if you forget Krsna while constructing a big building, then it is maya. Otherwise, it is reality. If the people of Paris would have installed the Deity of Krsna in these buildings, how nice that would have been! People chanting, dancing, and taking prasadam [food offered to Krsna] every day. Then there would have been no maya. These big buildings should have been places for people to worship Krsna, but instead they’re worshiping bones, some dead bones.

Devotee: People must be taught that everything belongs to Krsna.

Srila Prabhupada: It is a fact that everything belongs to Krsna. Why do they not understand?

Devotee: When we say, “Everything belongs to Krsna,” they say, “We don’t know Krsna.”

So why are you claiming, “This is France,” “This is Europe,” “This is America,” “This is my country”? Before your birth the land was here, and when you go it will remain here. So how can you claim that it is yours? What is the answer?

Devotee: The land belongs to the person who created it.

Srila Prabhupada: And who created it?

Srila Prabhupada: What is that nature?

Devotee: The life force working behind—

Srila Prabhupada: Nature is Krsna’s energy (mayadhyaksena prakrtih suyate sa-caracaram). So everything is created by Krsna, and everything belongs to Krsna.

Devotee: Srila Prabhupada, the scriptures teach that we are actually tiny spirit souls—one ten-thousandth the tip of a hair—and yet we become so puffed up that we think, “I am God” or “I am the controller of the material nature.” How is this illusion possible?

Srila Prabhupada: Because you are in the bodily concept of life. You do not know that you are a tiny spirit soul, a particle of consciousness. You are thinking, “I am this big fatty body,” just as a dog is thinking, “I am a strong bulldog.” It is the same illusion.

Devotee: But the materialist will insist that he is acting independently of God.

Srila Prabhupada: How is he independent of God? Napoleon wanted to finish his task, to conquer Europe, but he was kicked out of his position. Such a strong person, but he was not allowed to finish the task. How could he think that he was independent of God? That is foolishness. He was subject to being kicked out of his body at any moment, yet he was still thinking, “I am independent.” Where was his independence? He was simply falsely puffed up. And now, after being kicked out, if he has taken the body of a cat or dog, what was the benefit of all his previous activities? In the Bhagavad-gita [3.27] Krsna says, prakrteh kriyamanani gunaih karmani sarvasah: “Everything is going on under the stringent laws of nature.” But we are such fools that we think we are independent.

Devotee: Srila Prabhupada, in Bhagavad-gita Krsna says that whatever we think of when we die will determine our next birth. So is it true that a materialist’s accumulated mental impressions force him to take another body?

Devotee: And a devotee doesn’t accumulate any mental impressions?

Srila Prabhupada: No. He has mental impressions; his mental impressions are of Krsna. He’s always thinking of Krsna. For example, we may have some propensity to create a beautiful place like this park. We have creative energies. Therefore it is advised, nirbandhah krsna-sambandhe: create for Krsna. In India people have also created big fortlike buildings, but they are temples for worshiping Krsna. If the people who built this park had spent their energy for creating it in relationship to Krsna. they would have been purified. But because this park is simply meant for sense gratification, we know that the people who built it were under the laws of nature. So they increased their material contamination. You may create so many things, but if you become contaminated by the modes of material nature and have to accept the body of a cat or dog, then what is your benefit?