Back to Godhead > ~Featured~ > With Krsna in the Peaceable Kingdom

With Krsna in the Peaceable Kingdom 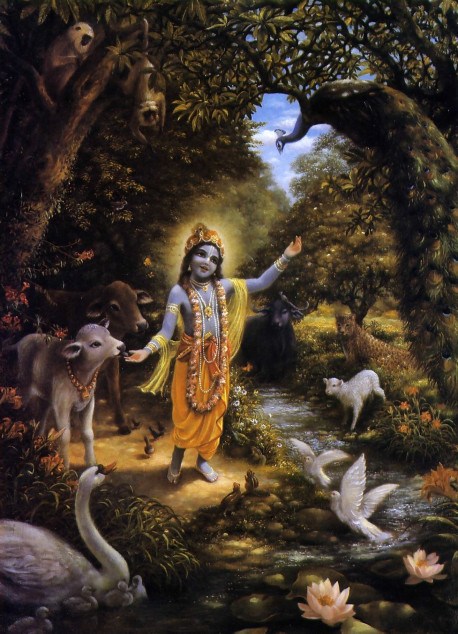 The forest of Vrndavana is lush with tropical fecundity; an exuberant nature has spilled out life in more abundance and variety than bush, treetop, glade, and stream could seem to hold. Myriads of varicolored birds, their bright plumes flashing in the foliage, fill the air with their musical calls, to which the monkeys tumbling in the treetops add a chattering counterpoint. The vagrant breezes gather scents from a multitude of flowers, stirring them together into a heady perfume that enchants the deer and leaves the leopards languorous and tame.

Then the forest creatures smell a far richer fragrance—a delectable, ambrosial musk that diffuses through the thickets. Breathing deeply, they shiver with joy. The enthralled animals begin to move into the wind, helplessly following the irresistible lure. As the intoxicating aroma intensifies, the creatures glimpse its source moving among the dense flower-burdened shrubs. It is Krsna, the ultimate object of all vision, wandering through the Vrndavana forest. The animals all follow, completely captivated by the unparalleled beauty of His exquisitely formed body with its bluish-black luster. Ecstatic love fills their hearts, overflows, and pours out of their throats in sounds of delight. Surrounded by their songs, Krsna moves through a chorus of creaturely praise that extends from the bass lowing of the cows to the soprano trilling of the birds. And then Krsna answers, calling back to each kind in its own language.

Among the sixty-four outstanding transcendental qualities of Krsna that Srila Rupa Gosvami enumerated half a millennium ago in his Bhakti-rasamrta-sindhu, one is the quality of being “a wonderful linguist.” Witnesses heard Krsna conversing with the demigods in pure Sanskrit, but He would also speak with the residents of Vrndavana and the inhabitants of Kashmir in their own native languages. And He was observed addressing various species of animals, also in their own tongues.

Thus when Krsna descended onto our planet five thousand years ago to exhibit Himself to the souls ensnared in matter as the ultimate delectable object for all the senses—indeed, precisely as Krsna, “the all-attractive”—He did not exclude the subhuman species. In His dealings with the animals of Vrndavana, Krsna confirms the statement He makes to Arjuna in the Bhagavad-gita (14.4), namely, that it is He who impregnates material nature with all living souls, and that although they may be born in the diverse forms of demigods, humans, animals, or plants, He remains the “seed-giving father” (bija-pradah pita) of all of them. Krsna acknowledges all living beings to be His children.

The material body of every living being is animated by a spiritual soul, who is the eternal offspring of Krsna. Each soul’s individual history of good or bad deeds causes him to become fastened into a higher or a lower body, yet all souls remain in essence equal as children of God. God never forgets them, and a godly person, Krsna tells us, sees all animate beings as spiritually equal sparks of the divine (Bg. 5.18).

But if we forget God and consequently develop eclipsed material vision, the transcendental unity of life eludes us. Once we have become estranged from Krsna, we become estranged from all other living beings—even those of our own kind. The symptom of our divorce from God is our inability to sustain peaceful, harmonious, loving relations with others. We incessantly make war upon our fellow humans, and we wantonly prey upon innocent animals, needlessly slaughtering them for food. At the same time we feel a need to rectify all our relationships—within our own families and communities, among races and nations, and between humans and subhumans.

Yet the disorder that has invaded all our relations is a symptom of one central enduring dislocation—our severance from God. Only when that is repaired will the disruption between ourselves and all other beings be healed.

There is no use in crying “Peace! Peace!” unless one makes peace with God. And no professed peacemaker, no matter how religious he appears, can be at peace with God until he stops preying upon His fellow beings in animal forms.

In a world where a fragile, so-called peace is maintained by the chief belligerents’ keeping each other paralyzed with terror, we long for the true repose of the real peaceable kingdom. That kingdom can indeed be restored. But there will never be the peaceable kingdom of God without God, the all-attractive.

We must invite Krsna back as the central object of all our senses. He is as available to us today as He was when He wandered at will in the Vrndavana forest, charming all beings. We need only chant His holy names. If we chant the Hare Krsna mantra, the veil of material vision will lift, our estrangement from God will be healed, and He will move before us always, just as He moves eternally in Vrndavana, the kingdom of God. In fact, Krsna never leaves that kingdom; so if He comes to us. His kingdom will come with Him. Only in this way can we establish that peaceable kingdom here and now.