Back to Godhead > ISKCON > News > New Books in Thai and Indonesian

New Books in Thai and Indonesian 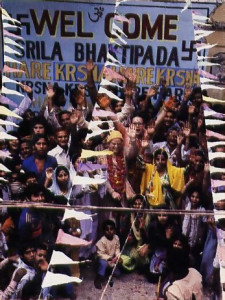 Receiving a tumultuous welcome in Pakistan

Karachi, Pakistan—For the first time, a spiritual master in the Hare Krsna movement has visited this nearly all-Muslim nation.

Recently Srila Kirtanananda Swami Bhaktipada stepped from a jetliner’s ramp onto the tarmac at the international airport here and was engulfed by hundreds of joyous Pakistani Hindus chanting “Jaya Bhaktipada! Jaya Prabhupada!” As his car neared the temple in downtown Karachi, throngs of people filled the streets, chanting Hare Krsna to the accompaniment of homemade cymbals and gongs. Flags, festoons, colored lights, and huge banners proclaiming “The People of Karachi Welcome Srila Bhaktipada” added to the festive atmosphere.

Amogha-lila dasa, director of the Hare Krsna movement’s activities in Pakistan, explained the big turnout: “The Hindus of Pakistan are starving for Krsna consciousness. As an isolated community in a nation of Muslims, they are deeply grateful for ISKCON’s programs and publications, which lift their spirits and rejuvenate their faith.” (ISKCON is the International Society for Krishna Consciousness.) 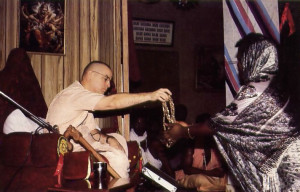 Kirtanananda Swami spoke to an audience of thousands from a stage erected in the street outside the temple. He enjoined them to attend to their spiritual needs and beware of the entanglement of materialistic life. Before leaving for Africa he held ISKCON’s first initiation in Pakistan and met with many local residents, Hindu and Muslim alike.

Kirtanananda Swami’s first stop in Africa was Ghana, where he made a guest appearance on national television and explained that spiritual knowledge is the key to a developing country’s real progress. Later he met with several prominent Ghanians, including a supreme court justice who studies Srila Prabhupada’s Bhagavad-gita As It Is and wears the devotional clay tilaka marks to court. At the temple, Kirtanananda Swami initiated L. Ankira, the son of one of Ghana’s former presidents.

In Lagos, Nigeria, a police escort was waiting to take Kirtanananda Swami from the airport to the temple, where he initiated the chief of police and gave him the name Arjuna dasa. To news reporters Kirtanananda Swami said, “It is crucial for Nigeria to take up Krsna consciousness before the Western materialistic influence becomes too prominent.”

Paris—In a surprise reversal, the newly elected Paris police prefect has affirmed that the members of the International Society for Krishna Consciousness (ISKCON) have the right to chant Hare Krsna publicly in the streets of Paris. The previous administration had banned the street chanting, saying that it violated public assembly guidelines.

The same day, the French Supreme Court reversed yet another decision against the devotees. Under anti-Krishna pressure, the previous Paris prefect had issued an order restraining the devotees from performing the traditional devotional ceremonies in their temple, a historic building in central Paris. Now, after a long legal battle, the Supreme Court has overruled that order.

Pitavasa dasa, ISKCON’s director of legal affairs in France, said the reversals show that the French administration now recognizes ISKCON to be a bona fide religious organization. “There used to be many attacks on our Society,” he said. “Our former Paris temple was located two blocks from City Hall, so we were surrounded by political interest groups. ‘Get the Krsnas’ had become a cause celebre. These decisions prove that France is still a country where freedom of religion is more than a slogan.”

Atlanta—Mechanistic and Nonmechanistic Science, a recent book by Dr. Richard Thompson (Sadaputa dasa), is stimulating some favorable response from the scientific community. Here are some comments from F. M. Menger, a professor at Atlanta’s Emory University.

“Each chapter of this well written book can be divided into two sections. The first part deals with an area of science or technology (computers, quantum mechanics, information theory, statistics, evolution, etc.). The author obviously has a broad appreciation of these areas and discusses them with an appealing clarity.

“The thrust of the scientific or ‘mechanistic’ portion of the chapters pertains to the limitations of science. It is here where I feel the book has its major strength. The incredible successes of science tend to obscure certain of its assumptions, weaknesses, and inadequacies. For example, the author makes a special point of the fact that science has not satisfactorily described such enormously complex but real elements of life as creativity, inspiration, hope, love, and consciousness. This reviewer feels that it never hurts a scientist to be humbled, and at times the book will do exactly that.

“Once having accomplished this, the author presents a ‘nonmechanistic’ system for handling aspects of life that science has not yet treated. This is based strongly on Eastern philosophy derived from the Bhagavad-gita and other literatures from the Vedic tradition of India. Thus, science gives way to religion, the appeal of which will undoubtedly vary from reader to reader.

“In summary, Mechanistic and Non-mechanistic Science treats the two cultures while professing the power of ‘non-mechanistic’ aspects of nature. The topic has been written about many times before, of course, but the wide perspective of the author gives this book a special touch.”

New Books in Thai and Indonesian 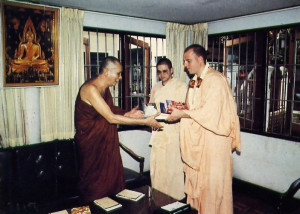 In Bangkok Srila Jayapataka Swami, a spiritual master in the Hare Krsna movment, presents new Thai books and other literature to Somdet Phra Nyanasamvara, the spiritual master of the King of Thailand.

Bangkok—The Bangkok branch of the Bhaktivedanta Book Trust (BBT) has published two new books in Thai: Beyond Birth and Death and The Perfection of Yoga. Both books were originally written in English by His Divine Grace A.C. Bhaktivedanta Swami Prabhupada and translated into Thai by Sammohini-devi dasi.

Meanwhile, fifteen hundred miles to the south, the Indonesian BBT has released three new titles: Search for Liberation, Raja-vidya, and Easy Journey to Other Planets. The three new books, all translated by Gaura-mandala-bhumi dasa, bring to seven the number of Indonesian books offered by the BBT. 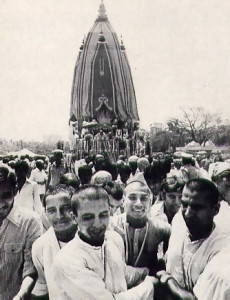 Bombay—The people of this city, the film capital of India, are used to grandly staged spectacles shining from the silver screen. But they witnessed a different kind of spectacle recently when the devotees of the Bombay Hare Krsna temple mounted a week-long Ratha-yatra festival.

Thousands lined the street to watch the najestic fifty-foot-high chariot carrying Deity forms of Jagannatha, Balarama, and Subhadra make its way from Sivaji Park to Chowpatty Park on the beach. Many did more than watch, however. The ring of cymbals, the boom of drums, the devotees’ nonstop chanting of Hare Krsna, the stately chariot itself—all created a spiritual excitement that drew many bystanders from the sidelines into the street, where they joined the devotees in chanting Hare Krsna and pulling the chariot.

For seven days at Chowpatty Park people chanted Hare Krsna and danced, heard devotional music, saw Krsna conscious plays and movies, relished delicious krsna-prasadam (food offered to Krsna), and listened to talks by Srila Kirtanananda Swami Bhaktipada and Srila Pancadravida Swami, two spiritual masters in the Hare Krsna movement. By the time the return procession had brought the chariot back to the temple, more than 200,000 people had taken part in Bombay Ratha-yatra ’82.

By Theodore Shabad (reprinted from The New York Times)

The Hare Krishna movement, whose saffron-robed devotees have long been familiar in the United States, has begun making inroads in the Soviet Union, and the Kremlin does not appear to be pleased.

According to a published Soviet account, the group has won disciples among educated people such as engineers and technicians who were thought to be toughened against what the Kremlin regards as Western ideological subversion but who found themselves poorly prepared to cope with mantra-reciting youngsters.

Their chanting and meditation appear to have found fertile ground in the Soviet Union, a country where the practice of yoga to achieve a higher level of consciousness has long had a following among intellectuals. The Hare Krishna group teaches a kind of devotional yoga known as bhakti, calling for selfless dedication to Krishna, a Hindu god.

The Soviet newspaper Sotsialisticheskaya Industriya, a national daily read by industrial managers, conceded that the beliefs and precepts of yoga appealed to knowledgeable people because some of its avowed objectives were close to those of Communism.

“It has become fashionable in the Soviet Union to fast for health reasons and to follow all sorts of diets, and yoga advocates vegetarianism,” the paper said. “We are fighting against drunkenness and condemn smoking, and yoga prohibits the use of both alcohol and nicotine. We are trying to put crass materialism to shame, and yoga calls for asceticism and for renouncing the attributes of well-being.”

But the newspaper, intent on portraying the Hare Krishna movement as a subversive device imported from the West, pointed out that while teaching ancient Indian philosophy, the movement had in fact had an American base and received most of its financial support from Americans.

The movement, known formally as the International Society for Krishna Consciousness, was founded in the United States in July 1966 by an Indian-born ascetic named A.C. Bhaktivedanta Swami Prabhupada. He died in 1977 at age 81.

What makes the movement unacceptable in the Soviet Union, the newspaper said, is that its emphasis on simple living and meditation diverts devotees from problems of everyday life and useful work and slows social and economic progress.

The industrial daily, which is published by the Communist Party’s Central Committee, conceded that the Soviet authorities themselves had in effect opened the doors to the Hare Krishna movement by admitting its publishing arm, the Bhaktivedanta Book Trust of Los Angeles, to the Moscow International Book Fair in 1979.

While refusing visas to leading American publishing executives such as Robert L. Bernstein, chairman of Random House, and weeding out undesirable titles from displays, the authorities appear to have given virtually free rein to the Krishna publishing house to exhibit books on India’s ancient Vedic philosophy and other religious and philosophical literature.

The 1979 book fair was attended by thousands of Russians, predominantly young and with the dress and bearing of the better educated. Some of them, apparently predisposed to the discipline of yoga, readily found their way to the exhibit.

By the fall of 1980, according to Sotsialisticheskaya Industriya, the movement had spread as far as 2,000 miles east of Moscow, to the Siberian city of Krasnoyarsk, where a Hare Krishna chapter installed itself at the local House of Culture, the community center, under the guise of a health club.

The young Russian who had helped prepare sweets at the book exhibit, a man named Yevgeny Tretyakov, appeared at the first meeting in saffron garb, recited mantras and explained that the way to health was through Krishna consciousness. In the end, the law caught up with Mr. Tretyakov. He was sentenced to an unspecified term as a “social parasite.”

The Soviet press tends to seize on specific examples to make a more general point, and the publication of the Hare Krishna expose in a major newspaper with a national circulation suggested that the devotional movement had won followers not only in Krasnoyarsk.

“Most of them understand by now,” the paper said, “that they have allowed themselves to succumb to alien influence, swallowing the lure cast out by our ideological foes. But there are others,” it went on pointedly, “who have yet to understand.” [The preceding article also appeared on the front page of The Times of India.] 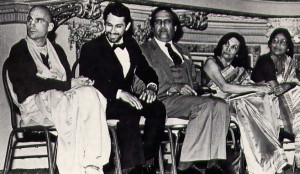 Chicago’s India Tribune (circulation 15,000) gave its annual Gandhi Communty Award to the Chicago Hare Krsna Temple—represented by His Holiness Tripurari Swami—and to eight other leaders among America’s Asian Indian community. Those shown here are Dr. Ricardo Melo (on Tripurari Swami’s left), who received the award on behalf of Swami Rama of the Himalayan International Institute of Yoga; Dr. Ghanashyam Pandey, president of the Illinois chapter of the Association of Indians in America; Sushila Gidwani, president of the Association of Asian Indian Women of America; and Kanak Dutta, Democratic candidate for the Maryland state assembly.