“A Great Fortune for the People of Trinidad” 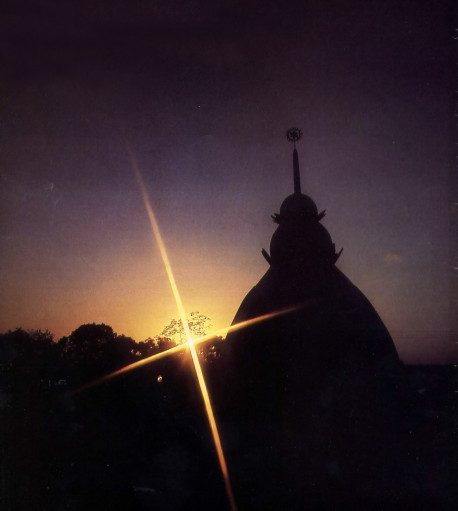 The growth of the Krsna consciousness movement in Trinidad, West Indies, helps fulfill a prediction made five hundred years ago by Lord Caitanya, a divine incarnation who appeared in Bengal and spread love of God throughout India. Lord Caitanya said, “In every town and village of the world, the chanting of Hare Krsna will be heard.” Since Lord Caitanya’s time many generations of His followers (known as Gaudiya Vaisnavas) have come and gone, and though they all believed His prediction would one day be fulfilled, they wondered how this miracle would happen. It seemed that the rest of the world was too remote, the language barrier too impenetrable, and the Vedic knowledge too spiritually refined for Krsna consciousness ever to leave India. 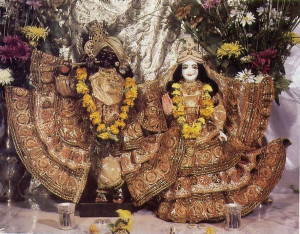 New home for the Deities of Radha-Gopfnatha. (Radha means “She who wors hips Krsna best,” and Gopinatha is a name for Krsna that means “master of the gopis, the milkmaids of Vrndavana.”)

It was not until His Divine Grace A.C. Bhaktivedanta Swami Prabhupada came to the West in 1965 and began the International Society for Krishna Consciousness (ISKCON) that Lord Caitanya’s prophecy began to become a reality.

Just before Srila Prabhupada left India, as he was considering where to begin his worldwide preaching, he received an invitation to Trinidad from a Mr. Ramacharitan Rickhai, who had received a copy of Srila Prabhupada’s magazine, BACK TO GODHEAD. Srila Prabhupada replied, “I am glad to learn that a number of noble gentlemen of Trinidad promise to cooperate with me. It is very kind of you that you have already invited me to become your guest when I go to your shore. If through your good organization you can secure a no-objection certificate from the Indian embassy of your place, then I can arrange for my passport and visa, and I shall at once start. I am looking forward to your cooperation.” 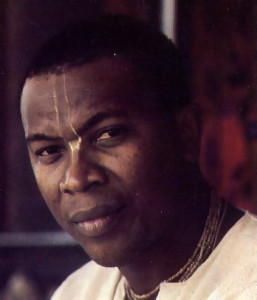 Tarksya dasa, leader of the Krsna Society in Trinidad, mobilized the devotees to raise funds for construction

Although several letters were exchanged, Mr. Rickhai never followed through on his invitation, and Srila Prabhupada eventually got free passage to New York City, where he began the Krsna consciousness movement.

But Srila Prabhupada did not forget Trinidad, and in 1968 he sent some of his disciples there to start a center. As Srila Prabhupada had taught by his own example, the disciples began by chanting Hare Krsna and distributing BACK TO GODHEAD in the streets. The people of Trinidad were attracted. They appreciated the Hare Krsna chanters and showed interest in reading Krsna conscious literature. 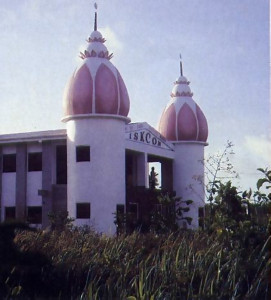 The grand opening of the temple

Among the first Trinidadians to take up Krsna consciousness in earnest was Trevor Worrell, an intense young man with a political bent who soon received spiritual initiation and the name Tarksya dasa from Srila Prabhupada. Tarksya proved to be a very enthusiastic student of Vaisnava philosophy, and he decided to dedicate himself to preaching Krsna consciousness to the people of Trinidad. 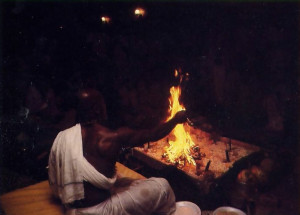 Trinidad’s Hindus (40% of the population) received the devotees warmly and invited them to chant and speak in their temples. When they saw Americans and the local boys taking up genuine Vedic culture, they appreciated the youngsters’ enthusiasm, but some of them doubted that the young Westerners could actually become brahmanas (priests). In India Lord Caitanya had strongly opposed the sectarian notion that only a person born in a Hindu family could become a brahmana. On the authority of the Vedic scriptures, He declared that love of God is dormant in everyone and that anyone who associates with a pure devotee and accepts the process of Krsna consciousness can become a pure devotee himself and thus earn the right to perform all religious functions connected with the worship of Krsna. As time passed the people of Trinidad could see that Lord Caitanya was right: The ISKCON devotees proved themselves to be qualified brahmanas. 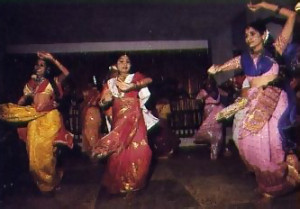 By tradition, many Hindus in Trinidad worshiped various demigods and considered the Absolute Truth ultimately impersonal. Srila Prabhupada’s followers opposed these practices and ideas. On the authority of the Bhagavad-gita and other Vedic scriptures, they established that although worshiping the demigods may secure the worshiper some temporary, material benefits, it cannot elevate him to the eternal, spiritual world. Only by worshiping Krsna, the Supreme Personality of Godhead, can one become free of all material desires, attain pure love of God in this life, and go back to Godhead in the next. 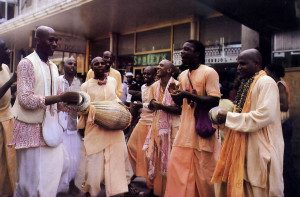 After the ceremonies in the temple, the celebrating went on with ecstatic chanting in town

These purifying and revolutionary concepts soon began to impress the people of Trinidad.

At first it was mostly young people who joined Tarksya in chanting Hare Krsna and studying Srila Prabhupada’s books. The older generation didn’t know whether to take the devotees seriously, although it was clear that they were achieving remarkable racial harmony among themselves by bringing Hindus, blacks, and whites together in peaceful spiritual congregation. 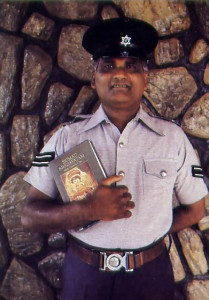 Gradually, by distributing Krsna conscious literature, speaking in Hindu temples, and sponsoring public festivals, the devotees won over the people of Trinidad. Observing that the young men and women practicing Krsna consciousness were actually austere—they never took intoxicants, ate meat, or indulged in gambling or illicit sex—people began to see them in a new light. Even nondevotees got into the spirit and would sometimes greet each other by saying, “Haribol!” (“Chant Hare Krsna!”). Older, established members of the community began attending the temple functions regularly. Businessmen, government officers, and priests from local Hindu temples began joining the young, full-time devotees at the temple for Sunday feast programs.

Several years ago Tarksya dasa realized that the best way to firmly establish ISKCON in Trinidad would be to erect a large Krsna temple. Determined to raise the necessary funds, he organized a retail clothing business with the devotees as salesmen, and after years of hard work they were able to purchase a piece of land and begin construction. The Hindu community also pitched in, and by February 1982 the temple was ready for the grand opening.

The two days of festivities for the temple opening culminated with the installation of the Deities of Sri Sri Radha-Krsna. A thousand guests took part in chanting and feasting. Attending the program was Srila Satsvarupa dasa Goswami, who has been initiating disciples in Trinidad since Srila Prabhupada passed away in 1977 and who oversees ISKCON’s affairs in the Caribbean. In his address he said, “I would like to acknowledge all the hard devotional work and austerity that have been done here. And I’m sure all of you responsible for this temple will say, ‘Whatever we did was simply due to the mercy of Srila Prabhupada.’ Yes, Srila Prabhupada has certainly given his mercy to you—and to all your countrymen. This temple is a place where all the people of Trinidad can come and worship Krsna and learn about Krsna consciousness.”

Satsvarupa dasa Goswami was not alone in his praise of the new temple and those who built it. Said one Indian gentleman who is the head of a chain of department stores in Trinidad and a long-time supporter of the Hare Krsna movement: “The construction of this temple is a great triumph for sanatana-dharma [Krsna consciousness]. I have witnessed the Hare Krsna movement grow in Trinidad from a few struggling devotees to a flourishing and influential spiritual force. I think we all owe the devotees a lot—not just for the magnificent new temple, but also for their wonderful example of how devotion to Krsna can break down all class and race barriers and inspire people to do the impossible.” And Mr. Ramaharry Garbdass, another leading business figure in Trinidad, summed up the mood of the temple inauguration like this: “This temple is a great credit for the devotees of the Hare Krsna movement, and a great fortune for the people of Trinidad.”

Although Lord Caitanya never personally went to the West, and although Srila Prabhupada never set foot in Trinidad, the chanting of Hare Krsna is nonetheless resounding today throughout this Caribbean island. No one need wonder any longer how Lord Caitanya’s miracle will come to pass: At least for Trinidad, the miracle has become a reality.