The Seige on the Kingdom of Puranjana 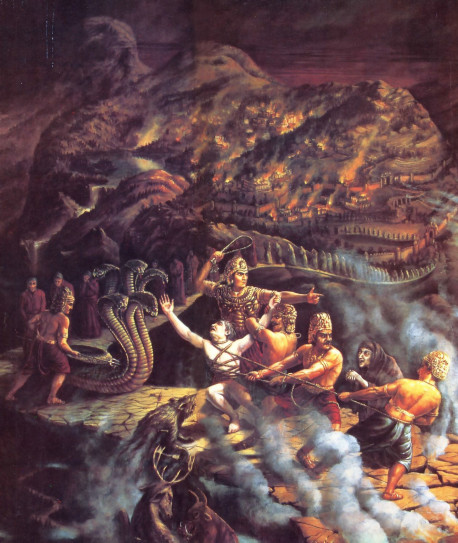 The illustration on this page depicts an allegory, the Story of King Puranjana, which was told ages ago by the great sage Narada to explain some of the perplexities of life in this material world.

King Puranjana, the ruler of the country known as Pancala, lived in an opulent city, full of gardens, parks, and palaces of dazzling beauty, There King Puranjana reigned for one hundred years in great comfort, surrounded by his servants, family, friends, and other citizens.

King Puranjana had a very beautiful wife, who was the center of his enjoyment, and of his very existence, Captivated by his wife’s attractive features, the King became preoccupied with pleasing her and tasting the pleasures of sex, He became extremely attached to his children, his home, and his material possessions, Desires for enjoyment filled his mind, and pursuing their satisfaction became his main occupation.

Meanwhile, the King’s youth quickly expired, and soon his kingdom was attacked by a powerful king named Candavega. Here we may note that the Sanskrit word puranjana signifies the living entity within the body,” The Vedic teachings make a clear distinction between the body itself and the living force that dwells within the body, The body is a sort of mechanical vehicle formed of various inert elements, The structures of the body, although wondrously complex, have no life of their own. Rather, it is the conscious self within the body who gives the body life. And when that consciousness departs, the body becomes lifeless.

King Puranjana, therefore, represents the living entity, for each living entity may be said to be the king or master of his own body, The country of Pancala represents the atmosphere in which one can enjoy one’s senses, and the capital city represents the body itself, The city’s walls, parks, towers, gates, and so on represent the skin, hair, sensory organs, and other constituents of the body, The Sanskrit word candavega means “passing very swiftly,” So King Candavega represents Time, King Candavega attacked the city of King Puranjana with 360 male and female soldiers, who represent the days and nights of the year, As each day and night pass, one has lost another day of one’s life.

While King Candavega and his soldiers were attempting to plunder the city of King Puranjana, a five-headed serpent began to defend the city, This serpent represents the living entity’s vital force, According to Vedic scriptures dealing with yoga, the vital force maintains the workings of the body through five kinds of air that move within the body, Thus the serpent is represented as having five hoods, As time attacks, one’s vital force fights back to maintain the body, Gradually, however, the vital force weakens, Thus the five-hooded serpent began to lose his strength.

Because King Puranjana collected taxes within his kingdom, he was free to enjoy the pleasures of sex, By the nature of sexual affairs, he didn’t realize that he was coming increasingly under the control of women, that his life was passing away, and that he was quickly approaching death.

A living entity tries to be happy by sexual enjoyment, but the more he tries to enjoy, the more he becomes entangled in material existence, By sexual enjoyment, one becomes even more firmly rooted in the illusion that the body is the self, and one increasingly forgets one’s spiritual identity and the need for spiritual realization, As the influence of sexual attachment expands, one begins to cling not only to one’s wife but also to home, land, and possessions. One begets children and must see to their welfare, and one becomes obliged to maintain one’s prestige among relatives and friends, Consequently, for the sake of supposed enjoyment, one has to work very hard for money to support one’s family and home, One forgets that one’s body, family, and home are all temporary, and thus one’s spiritual consciousness becomes overwhelmed by illusion.

Attacked incessantly by the soldiers of Candavega for one hundred years, the five-hooded serpent began to lose his strength, and King Puranjana and his friends and citizens became extremely anxious. One may struggle against time for perhaps one hundred years, but eventually one’s vitality weakens, and one’s bodily limbs (Puranjana’s citizens and friends) become feeble.

It is also significant to note that according to Vedic medical science, sexual activity saps one’s physical energy, By abstaining from sex, yogis can increase their lifespans dramatically and develop extraordinary siddhis, or physical powers, On the other hand, by frequent sexual activity one weakens the body and hastens the arrival of old age and death. A young man seeks to enjoy sex as much as possible, not knowing that the more one has sex in youth, the more severely the body is attacked by weakness, pain, and disease in old age.

Old age is figuratively known as Kalakanya, the daughter of time. So while time’s soldiers were attacking the city of King Puranjana, time’s daughter, old age, joined the attack. Old age begins her attack imperceptibly, so much so that one fails to realize that old age will eventually overcome him. One plans for the future, working hard to be comfortable and enjoy, but as one grows old one loses one’s vitality, and enjoyment slips away. Scientists conduct research to understand old age and overcome it, but are themselves overcome in the attempt.

Because a materialist lives for a dream of happiness and comfort in this world, it is better for him not to think about old age, disease, and death. But one who is serious about spiritual enlightenment should always be conscious of the miseries inherent in birth, death, disease, and old age. Understanding these miseries, an intelligent person avoids getting entangled in useless attempts to enjoy what appears to be happiness for the bodily senses, and instead tries to understand his spiritual identity and revive his spiritual life.

Although the city of King Puranjana was full of paraphernalia for sense gratification, the serpent that protected the city was growing old and weak, and Kalakanya, with the help of the powerful soldiers, gradually attacked the city’s inhabitants and rendered them useless. The Yavana soldiers entered the gates of the city and gave severe trouble to all citizens. The city of the body has nine gates—two eyes, two ears, two nostrils, the genitals, and the rectum. In old age, diseases appear at these gates of the body, the limbs lose their power to act, and the entire body begins to deteriorate.

Kalakanya embraced King Puranjana, and thus he gradually lost all his beauty. Having been too addicted to sex, he became very poor in intelligence and lost all his opulence. As the soldiers plundered his possessions, his ministers and family members and other citizens began opposing him, and his wife became cold and indifferent. Thus the King was full of anxiety, but he was helpless because he was overwhelmed by Kalakanya. By Kalakanya’s influence, the objects of King Puranjana’s enjoyment became stale. The King became confused and didn’t know what to do.

This is the situation of the living entity at the time of death, especially in modern civilization. As one grows older one’s body, mind, and intelligence grow weak, and one’s subordinates and family members turn against him. Even one’s own wife becomes unfaithful. Meanwhile, because one has had no training in spiritual understanding, one becomes bewildered. One has dedicated one’s entire life to the pursuit of material happiness, and then one’s very body, on which such happiness entirely depends, is overwhelmingly attacked, and one doesn’t know what to do. Not having any spiritual understanding, one becomes entirely miserable, overcome by the forces of time.

The soldiers overran the city, and although the King had no desire to leave, he was being circumstantially forced to. Prajvara set the city on fire, terrorizing the citizens, and the King was overwhelmed by grief.

While the city was being devastated, King Puranjana began to think of his family, his home, his household paraphernalia, and whatever wealth he had. He remained affectionate toward his wife and children and worried about them. How would they live in his absence? Who would maintain them? He recalled his wife’s affectionate dealings and lamented her fate.

When nature forces the living entity to leave the body, that body, deprived of its living force, again turns to inert matter. While friends and relatives carry the body in procession to the crematorium or the grave, the living entity himself has already left the body, taking his desires for enjoyment with him. (It is these materialistic desires that have been figuratively described as the King’s followers.)

While enjoying his youth, King Puranjana had killed many animals, and now these animals appeared again and began to pierce him with their horns. According to the laws of karma, one who kills animals for his own enjoyment (or who pays to have animals killed for the taste of meat) is subjected to consequent suffering after death.

King Puranjana had a powerful well-wisher and friend named Avijnata. Unfortunately, however, while the city was being devastated and King Puranjana was being dragged off, the King could not remember this intimate friend.

The Sanskrit word avijnata means “the unknown one.” Every living being has an intimate friend in the Supreme Personality of Godhead, Lord Krsna. Unfortunately, however, a living being in materialistic life forgets his eternal relationship with Krsna and tries to be happy independently in the material world. Absorbed in trying to gratify his senses, he lives in a world of illusion, pursuing a happiness that doesn’t exist, and not understanding that time is gradually taking away his life. If a living entity revives his relationship with Krsna, he can transcend the influence of illusion, escape the sufferings of materialistic life, and at the time of death return home to the kingdom of God in the spiritual world. Unfortunately, however, one who has spent his whole life for sense gratification cannot remember Krsna, and at the time of death he is dragged off to the next body, to continue in an endless cycle of repeated birth and death.

We have presented here only a portion of the story of King Puranjana, which is quite long. The allegory, which ends favorably for the King, appears in its entirety in Srimad-Bhagavatam, Fourth Canto, Volume Four.