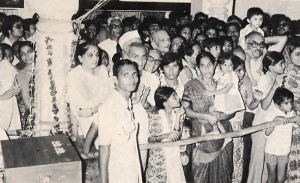 Guests from all over India and the world visited Hare Krsna Land, ISKCON’s temple-hotel complex in Bombay. They came to celebrate the day when Krsna made His advent, some fifty centuries ago

Bombay—Recently, the International Society for Krishna Consciousness held a three-day festival in 115 cities worldwide. The celebration honored Janmastami (the day Lord Krsna made His advent in this world) and Vyasa-puja (the day ISKCON’s founder-acarya His Divine Grace A.C. Bhaktivedanta Swami Prabhupada made his advent.) In Bombay, the scene of the festivities was Hare Krsna Land, ISKCON’s temple-hotel complex at Juhu Beach. More than a quarter of a million people attended. Covering the event in Bombay were representatives from the Indian press and television industry, along with ABC-TV.

The festival’s high point was Lord Krsna’s advent day, which also happened to be India’s independence day. The people who visited the complex witnessed a panorama of Krsna consciousness. In the temple they heard devotional songs and viewed the Krsna Deities on the altar. In the auditorium they took in devotional music and dance. Outdoors in the huge pandal tent they heard ISKCON members and leading citizens talk about the need for spiritual culture. Throughout the day, the guests enjoyed more than 150,000 free servings of prasada (spiritual food offered to Lord Krsna). The excitement reached a crescendo at midnight, when the Radha-Krsna Deities were bathed in an abhiseka ceremony. Afterward, more than one thousand guests partook of a full nine-course vegetarian feast. Among the many visitors from other countries was a delegation from Russia.

The Hare Krsna movement has opened two new vegetarian restaurants, one in Austin, two blocks from the University of Texas, and the other in Washington, D.C. on Capitol Hill, just a short walk from the White House. Both restaurants are named “Govinda’s” (Govinda is a name for Krsna that means “He who gives pleasure to the senses”), and both offer their patron opulent helpings—”all you can eat”—of krsna-prasada, food that is spiritually pure because it has first been offered to Lord Krsna.

To gather information for a biography now in progress, Srila Satsvarupa dasa Goswami would like to get in touch with anyone who had personal contact with His Divine Grace A.C. Bhaktivedanta Swami Prabhupada, the founder-acarya of the International Society for Krishna Consciousness. If you can remember something about Srila Prabhupada from your own personal experience, or if you can provide copies of relevant letters, documents, tape recordings, films, or photographs, please write to