Colleges for curing the Social Body — Prabhupada Speaks Out

Colleges for curing the Social Body 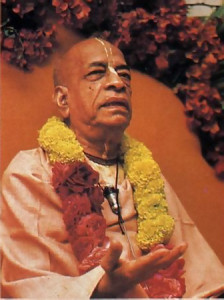 This exchange between His Divine Grace A.C. Bhaktivedanta Swami Prabhupada and some of his disciples took place in Vrndavana, India, during March of 1974.

Srila Prabhupada: In this age the politicians’ business will be to exploit the poor citizens, and the citizens will be embarrassed and harassed so much. On one side there will be insufficient rain and therefore scarcity of food, and on the other side there will be excessive taxation by the government. In this way the people will be so much harassed that they will give up their homes and go to the forest.

Atreya Rsi dasa: Nowadays the government simply collects money and does nothing.

Srila Prabhupada: The government’s duty is to see that every person is employed according to his capacity. There should be no unemployment—that is a very dangerous situation in society. But the government has drawn people off the land and into the cities. They have made the consideration, “What is the use of so many people working on the land? Instead we can kill animals and eat them.” It’s all very easy—because they don’t care about the law of karma, the inevitable results of sinful activities. “If we can eat the cows, why should we take so much trouble to till the land?” This is going on all over the world.

Atreya Rsi dasa: Yes, the farmers’ sons are giving up farming and going to the city.

Srila Prabhupada: You know this nonsense of “topless, bottomless”? The leaders want that. They want the hotels to pick up college girls and let them be enjoyed by the guests. All over the world the whole population is becoming polluted. So how can people expect good government? Some of the people will take charge of the government, but they are polluted. So wherever we have a Hare Krsna center we should immediately establish a college for training people—first, according to their natural talents (intellectual, administrative, productive, and laboring). And everyone will be elevated to spiritual awareness by performing the spiritual activities we prescribe—chanting the Hare Krsna mantra, hearing the science of self-realization from Bhagavad-gita, and doing everything as an offering to Krsna. Everyone’s life will become devotional service to the Supreme Lord.

At the same time, for the management of practical affairs we have to organize and train the different social divisions, because there are different kinds of brains. Those who have very intellectual brains should become brahmanas—priests, teachers, advisors. Those who are fit for management and protection of others should become ksatriyas, administrators and military men. Those who are fit for producing food and taking care of the cows should become vaisyas, mercantile men. And those who can assist the others and take up trades and crafts should be sudras, workingmen.

You must make sure that everyone can engage in the kind of occupation he is suited for. That is important. The thing is, every kind of work can be devotional service to the Lord—the main point is to see that people are engaged in that spirit in their natural work. For instance, when you are walking, your brain is working—”Go this way; go that way; a car is coming”—and your brain says to your legs, “Come to this side.” Now, the work of the brain and the work of the legs are different, but the central point is one—to get you safely across the street. Similarly, the central point of the social body should be one—everyone should help in serving Krsna.

Srila Satsvarupa dasa Goswami: Will this kind of college be for the general public?

Srila Prabhupada: Yes, for anyone. For instance, an engineering college is open for everyone; the only requirement is that people must be ready to take up the training. This is our most important program now, because people all over the world have been misguided by these so=called leaders. Children can attend a Krsna conscious primary school, and then, when they are grown up, they can attend a Krsna conscious college for further development in their occupational work and their devotional life.

Srila Prabhupada: Not this modern business—no. That is rascaldom. “Business” means that you produce enough grain and other crops so that you can eat sumptuously and distribute to everyone—men and animals (especially the cows)—so that they will become stout and strong. That way the cows can supply milk and the human community can work hard, without suffering from disease. We are not going to open mills and factories. No.

Yadubara dasa: Srila Prabhupada, what class do the arts and crafts come under? In our society today artists and musicians are accepted as philosophers.

Srila Prabhupada: No, an artist is a workingman. At the present moment your colleges and universities are giving too much stress on the arts and crafts. Therefore the whole population is workingmen. No real philosophers, no wisdom. That is the difficulty. Everyone is being drawn by the attraction of getting a high salary. They take a so-called technical or scientific education and end up working in a factory. Of course, they won’t work in the field to produce crops. Such people are not philosophers. A philosopher is one who is searching out the Absolute Truth.

In your Western countries the rascals are writing about the philosophy of sex, which is known to the dog. This kind of philosophy can be appreciated by rascals, but we do not appreciate it. Someone who is searching after the Absolute Truth—he is a philosopher. Not this rascal Freud—elaborating on how to have sex. In the Western countries the people have all become low-class, and Freud has become their philosopher. “In the jungle, the jackal becomes the king.” That’s all.

What is the actual knowledge in this so-called Western philosophy? The whole Western world is struggling along for industry, for making money—”Eat, drink, and be merry.” wine and women. That’s all. They are less than low class. This is the first time the attempt is being made to make them human beings. Don’t mind that I am using very strong words—it is a fact. They are animals, two-legged animals. Rejected men. Vedic civilization rejects them as the lowest of the low. But they can be reclaimed.

Westerners can be reclaimed, just as you Westerners—my students—have been reclaimed. Although you come from the lowest situation, by training you are becoming more than brahmanas. There is no bar to anyone. But unfortunately, these rascals do not agree to accept this opportunity. As soon as you say, “No more illicit sex:” “no more meat-eating,” they become angry. Rascals and fools. As soon as you give them good lessons—education—they become angry. If you give a snake nice milk and banana, the result is that he will simply increase his poison. But somehow, by Krsna’s grace, you are becoming trained. You become trained and revise the whole pattern of Western civilization, especially in America. Then a new chapter will come in. This is the program. Therefore Krsna conscious colleges are required.