How a spiritual school readies young people for adulthood. 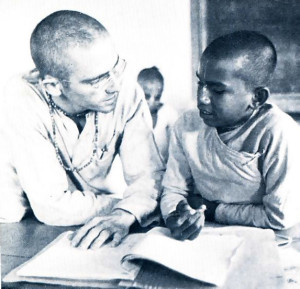 “What may be right livelihood for one student may not be so for another.”

Dhanurdhara dasa earned his philosophy degree at the State University of New York. After graduate work in education, he joined the Krsna consciousness movement in 1970 and eventually began teaching in Krsna conscious schools. For the past three years he has been on the staff of the Krsna conscious school in Vrnddvana, India, where some forty boys between ages eight and sixteen reside. On a recent visit to the subcontinent. a Philadelphia grade-school teacher named Joshua Greene taped this conversation.

Mr. Greene: What is it like teaching in India?

Dhanurdhara dasa: Vrndavana is unique. It’s the place where Lord Krsna made His appearance five thousand years ago. So you don’t really feel yourself a part of the material world here. Life is simple, the climate is right, and everywhere you turn there’s something, some holy spot or temple, to remind you of Krsna. It’s a perfect environment for spiritual training, spiritual growth.

Mr. Greene: What is a typical day like for students here at the Vrndavana school?

Dhanurdhara dasa: Well, there are seasonal adjustments, but usually the boys rise at 4 A.M., and at 4:30 they go to the temple to take part in chanting and dancing. First they sing prayers to the spiritual master, and then they sing the Hare Krsna maha-mantra. the names of the Lord. At 5 we all go for a walk, chanting Hare Krsna softly on our beads as we make our way to the sacred Yamuna River. After bathing we go through Vrndavana village, singing Hare Krsna in a festive mood with drums and cymbals.

Mr. Greene: Do people object at that hour of the day?

Dhanurdhara dasa: Everyone in Vrndavana is a devotee of Krsna, so by then practically everyone is awake and chanting Hare Krsna and performing their other morning devotional activities. They actually look forward to the boys’ arrival each morning. Then we return to the school for a class on the Srimad-Bhagavatam, where we discuss the science of self-realization and God consciousness. At 9 A.M. we have breakfast. Next, academic classes begin: Hindi, Sanskrit, math, history, geography, English, philosophy. We have a light meal at 1:30, and afterward the boys wash their clothes and clean the asrama. Later they can nap if they like, or study. Between 4 and 5 P.M. they freshen up with a bath and have a song class where they sing songs about Krsna in Sanskrit, Hindi, and Bengali. This is followed by an evening meal, a discussion on the Bhagavad-gita, hot milk, and then rest by 8.

Mr. Greene: How does the Vrndavana school prepare the older boys for adulthood?

Dhanurdhara dasa: That depends on the individual student’s propensities. In the Bhagavad-gita Krsna describes natural divisions of livelihood according to ability and inclination. The more intelligent may continue their studies. But by the time they’re twelve, some boys show more interest, for example, in things that let them work with their hands. It’s a very impractical law that forces young people to remain in school longer than that. Not everyone has great intellectual capacity. We give everyone the opportunity to develop intellectually, but if a teacher sees that a boy doesn’t want to sit in class, that he is happier doing other types of work—like managing, farming, tending the cows, or a craft—the teacher may recommend that the boy be trained accordingly. Srila Prabhupada wanted our schools to offer all types of training.

Mr. Greene: So the educational process varies in the Krsna schools according to the capacity of the child?

Dhanurdhara dasa: Yes. Of course, the spiritual program is the same for everyone. All the children learn to be clean, self-disciplined, respectful, and above all, Krsna conscious. The main idea behind Krsna conscious schooling is that human life is meant for developing love for God. But what may be the right livelihood for one student may not be so for another. We know from the Bhagavad-gita that one’s abilities and inclinations toward a particular type of work are a result of karma, activities performed in previous lifetimes. Generally, the symptoms become manifest by the time the person reaches twelve or thirteen years.

Mr. Greene: Do the teachers push the boys to give up play and engage in more serious activities?

Dhanurdhara dasa: No. How can you force devotional service? Devotion to Krsna has to come voluntarily from the heart. All the boys have free time to do with as they like. We see, though, that some will choose, of their own accord, to use their spare time to learn scriptural verses or songs about Krsna or to listen to recorded lectures by their gurus. As their devotion grows, they naturally want to make the most of their time. They develop a taste for serving Krsna and chanting the Lord’s names and discussing His pastimes.

Mr. Greene: I understand some of the boys are expert singers and musicians.

Dhanurdhara dasa: Oh, yes. Their chanting is famous all over India.

Mr. Greene: Do they perform professionally?

Dhanurdhara dasa: No. That would be exploitation. Their main purpose at school is to develop the qualities of pure devotees, not to become professionals. There are, unfortunately, some schools in India that do that—parade the children out before wealthy people in order to collect donations for the school. No. Rather, our students just want to enliven other people to become devotees of Krsna: Last year we traveled to Bangalore and chanted flare Krsna and gave discourses on self-realization. Whole neighborhoods came out and joined in the chanting. We couldn’t get away. Hundreds followed us. Whole towns.

Mr. Greene: Why such a reaction?

Dhanurdhara dasa: Even though very few Indians strictly follow the principles of Krsna culture these days, they at least know the system and understand its importance. In the West few people understand the concept of a God-centered education. They think it’s brainwashing. But in India, the people have a natural appreciation for it. The men from more aristocratic families usually received this kind of training themselves. And so wherever we go, people invite us into their homes and treat us royally. “It’s wonderful to see that you are training these boys to be Vaisnavas, devotees of the Lord.”

They appreciate spiritual purity. Srila Prabhupada told us to expect such a reaction. He used to say that a person may be a drunkard—but he doesn’t want his child to be one. Indian people are amazed to see how our boys respect their teachers and call them prabhu (“master”), how they respect adults in general, and how they bathe often, chant mantras, and live such pure lives. The Indian people’s children are becoming wild and Westernized, and here they see us doing with our children what they have been unable to do with their own.

Mr. Greene: Is Krsna conscious schooling as effective in Western countries as in India?

Dhanurdhara dasa: Why not? Spiritual development depends more on training than on environment. Besides that, wherever you have a community of devotees, that naturally provides a proper environment. It’s not a question of Eastern or Western environment. The real point is that today’s educational system—Eastern and Western—lacks spiritual direction, and that spiritual training should begin from childhood.