Back to Godhead > ~Featured~ > Krishna Reveals His Universal Form at Kuruksetra

O Krsna, O master of all mystics, please show me Your universal form!” This appeal by Lord Krsna’s devotee, spoken fifty centuries ago on the field of battle, heralds a divine manifestation never seen before. 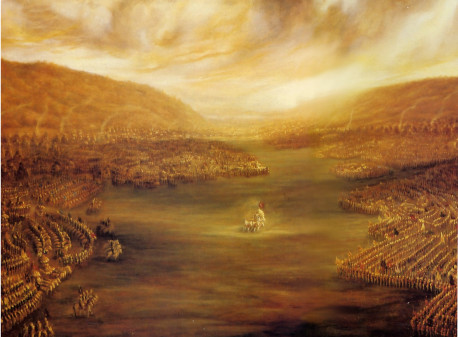 The scene is the vast Kuruksetra plain, five thousand years ago. At that holy place, one hundred miles northwest of present-day New Delhi, a devastating fratricidal war of royal succession is about to begin. Suddenly a lone chariot enters the no-man’s-land between the two poised armies. Upon it ride Arjuna, the hero of the battle, and his charioteer, Lord Krsna. Arjuna, paralyzed with indecision at the prospect of slaying his own friends, relatives, and teachers in the opposing army, accepts his friend Krsna as his guru and appeals to Him for guidance. The Lord then speaks the timeless teachings of the Bhagavad-gita, “The Song of God.” 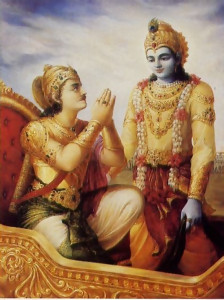 The Bhagavad-gita is profoundly revelatory. Not only does Krsna reveal the details of the transcendental science of devotional service, by which the soul suffering in the world of matter can gain release and reach a state of eternal bliss, but He also reveals Himself to be the goal of that service, the object of all worship, the source of all that exists, and, indeed, the Supreme Absolute Truth Himself. Among all Krsna’s revelations, however, none is so awesome, so magnificent as the never-before-seen universal form . . .

The Bhagavad-gita relates: If hundreds of thousands of suns were to rise into the sky at once, their effulgence might resemble that of the Lord in His universal form. That wondrous form possessed unlimited mouths, unlimited eyes, unlimited faces, legs, and arms, and He wore countless divine, dazzling ornaments and garments. All the infinite expansions of the cosmos had manifested in one place, although divided into many thousands.

“Arjuna prayed, ‘O almighty one, everyone is disturbed at seeing Your universal form, and so am I. I can no longer maintain my equilibrium. Beholding Your radiant colors filling the skies and Your many mouths with their terrible teeth, I am afraid. O all-pervading Lord, I see You devouring everyone with Your flaming mouths, scorching everything with Your fiery glare. O Lord of lords, please be gracious to me and tell me who You are’ “ 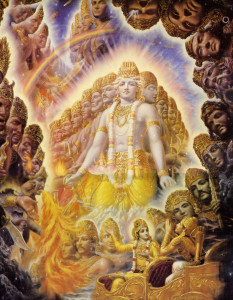 The Lord spoke: “Time I am, destroyer of worlds, and I have come forth to annihilate all people. Except for you and your brothers, all the soldiers on this battlefield will perish in the war. So get up and prepare to fight, O Arjuna! Your enemies have already been slain by Me. Simply be My instrument, and after conquering them you shall enjoy a flourishing kingdom.”

Then Arjuna, awestruck and trembling, addressed the Lord: “O Krsna, O refuge of the universe, You are the imperishable source of all, the cause of all causes, transcendental to this creation. O limitlesss form, You pervade this entire universe! I bow before You thousands of times, from in front, from behind, from all sides! O Almighty Lord, O abode of the cosmos, having seen Your magnificent universal form for the first time, I am joyful, yet I am also filled with fear. Please, therefore, reveal to me once again Your original form as Krsna. I long to see You in that form.”

Full of compassion for His devotee, Krsna replied, “My dear Arjuna, gladly have I shown you My universal form, but I see that this horrifying feature of Mine has disturbed you. Now, My friend, be done with fear; let your mind become peaceful. Behold My previous form, as you desire.”

The Lord then displayed His four-armed form, and at last His two-armed form, thus encouraging Arjuna.

“My dear Arjuna,” said Krsna, “the form you are now seeing is very difficult to behold. Even the demigods are ever seeking the opportunity to see this two-armed form of Mine, which is so dear to all. Neither by dry academic study of the Vedas, nor by self-punishment, nor by mundane charity, nor by ritualistic worship can one see Me as you are seeing Me. Only by pure devotional service, O Arjuna, can one see Me as I am, standing before you. Only in this way can one enter into the mysteries of My understanding.” 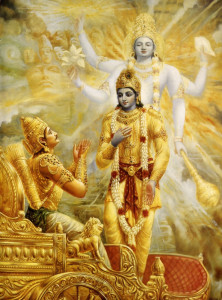 We learn of the significance of Krsna’s universal form in Bhagavad-gita As It Is, the translation and commentary by His Divine Grace A.C. Bhaktivedanta Swami Prabhupada: “The universal form, with its thousands and thousands of heads and hands, is manifest just to draw the attention of those who have no love for God. It is not God’s original form.” For those who have no faith that Krsna is God, and who thus deride devotional service to Krsna as a pitiable delusion, Krsna’s revelation of the universal form may shock them out of their skepticism with its awesome majesty. Then, if out of fear they obey the laws of what they conceive as a “vengeful” God, they can gradually be drawn to the path of loving devotional service through proper guidance.

Arjuna, being Krsna’s pure devotee, had no real need or desire to see the universal form. But he requested Krsna to display it for our sake—to convince us of Krsna’s divinity and to provide us with a foolproof test of anyone claiming to be an incarnation of God. If an “incarnation” can’t show us the universal form, he’s not God, and we should dismiss him at once as a fraud.

As for those of us who are open to the idea that Krsna is in fact the Supreme Personality of Godhead, we should try to follow in Arjuna’s footsteps. We may marvel at the wondrous universal form—”magnificent, all-expanding, unlimited”—as Krsna reveals it in the Bhagavad-gita, But we shouldn’t desire to see it. Rather, we should want to see Krsna’s original, all-attractive, humanlike form. To be blessed with a revelation of this form is the real goal of all yoga and all religion, and we can earn that blessing only by learning to love Krsna through the practice of pure devotional service.