Back to Godhead > ~Featured~ > On Brahmanas — Actions Speak Louder Than Birth

Popular wisdom said, “A brahmana is someone born in a brahmana family.”
But Srila Prabhupada, following Vedic scripture, had another idea . . . 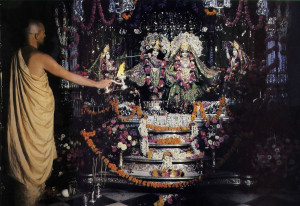 Worshiping the Deity form of Lord Krsna demands the highest brahminical standards of purity and devotion. Srila Bhavananda Goswami, one of the spiritual masters in the Krsna consciousness Society, worships the Radha -Krsna Deities at the Society’s temple in Bombay. Another important brahminical duty disseminating the transcendental knowledge found in the Vedic scriptures.

Back in 1966, sometime in September, Allen Ginsberg dropped by a little Hare Krsna temple in a storefront on New York’s Lower East Side. He had come to meet His Divine Grace A.C. Bhaktivedanta Swami Prabhupada, a seventy-year-old Indian svami who had come to America to fulfill his spiritual master’s order that he bring Krsna consciousness to the English- speaking people of the world. At the end of their meeting, Mr. Ginsberg asked Srila Prabhupada, “Do you really intend to make these Americans into Vaisnavas [devotees of Visnu or Krsna]?”

“Yes,” Srila Prabhupada replied, “and I will make them all brahmanas.”

This conviction of Srila Prabhupada’s—that he could turn Westerners into qualified brahmanas—astonished Allen Ginsberg, and in the years that followed it would also astonish many people in India and around the world who had preconceived notions about who could and who could not be a brahmana. The Vedic scriptures clearly direct us to look at person’s qualities and activities to determine whether or not he is a brahmana, but in India this direction is generally either unknown or ignored. Instead, most people there believe that the sole criterion for being a brahmana is birth in a family of brahmanas. In the early part of this century Srila Prabhupada’s spiritual master, Srila Bhaktisiddhanta Sarasvati Thakura, saw the great need for reviving pure brahminical culture in the modern world and strove to train a class of genuine brahmanas in India. And Srila Prabhupada followed his spiritual master’s example when he came to the West.

The fundamentals of brahminical culture are outlined in the Bhagavad-gita, a book widely revered as the essence of Vedic wisdom. Early in that work Lord Krsna, who is God Himself, explains that He has created four natural divisions in society according to work and quality. These are the brahmanas (intellectuals), the ksatriyas (military and political leaders), the vaisyas (farmers and merchants), and the sudras (servants of the higher classes, or manual laborers). Later in the Bhagavad-gita Krsna explains the qualities of the brahmanas: “Peacefulness, self-control, austerity, purity, tolerance, honesty, wisdom, knowledge, and religiousness—these are the qualities that brahmanas display in their activities” (Bg. 18.42).

At present the world lacks the guidance of such persons. Instead, we are led by people motivated by greed, lust for power, or perverted ideologies. The basic principle, of course, is the overweening desire for sense pleasure. Lord Krsna explains in Bhagavad-gita that this desire destroys one’s intelligence and brings hellish punishment both in this life and the next. But because such leaders either disbelieve in God outright or else have no systematic knowledge of His instructions or His powers, they feel they can do anything with impunity. Thus they insure a dark future for themselves and those they lead. 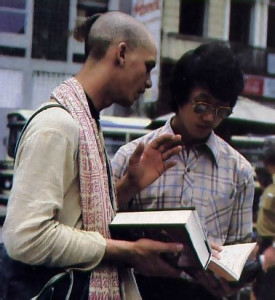 A devotee in Brazil distributes a
Portuguese translation of a book by Srila Prabhupada.

The Vedic literatures contain that systematic knowledge our present leaders lack. Vedic knowledge teaches that we are not our material bodies but rather spiritual souls, part and parcel of the Supreme Soul, Krsna, or the Absolute Truth. And one who knows the Absolute Truth, or the Supreme Brahman, is a brahmana (brahma janatiti brahmana). The need today is to train a class of genuine brahmanas who possess the aforementioned qualities and who know the relationship between matter, spirit, and the controller of both. With these qualities and this knowledge they will truly be able to guide people to the ultimate goal of life—liberation from the painful cycle of birth and death and entrance into the eternal, blissful kingdom of God.

But, you may say, such guidance seems impractical. How can it help us in our everyday lives? The answer is that although the ultimate goal of brahminical culture is liberation from the material world, it is not in any sense quixotic. Genuine brahmanas provide invaluable guidance in the day-to-day affairs of society. It is this dual approach that Srila Prabhupada offered: spiritual ideals based on broad scriptural knowledge along with practical instruction in everyday life. By his teachings and his own example of impeccable brahminical behavior, Srila Prabhupada inspired his Western followers to rise to the brahminical standard and take on the duties of qualified brahmanas. 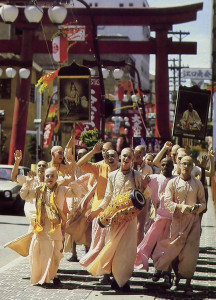 Chanting Vedic mantras and teaching others to chant them are two functions that all brahmanas must perform. Devotees fulfill both obligations at once as they chant the greatest of all mantrasthe Hare Krsna maha-mantra-on the streets of the Chinese quarter in Sao Paulo, Brazil.

Unfortunately, many people in India still cling to the idea that only a person born in a brahmana family can be a brahmana—an idea completely antithetical to the Vedic scriptures. A son of a Justice of the Supreme Court is not automatically entitled to sit on the bench when he comes of age. He must qualify himself by earning a law degree, passing the bar examination, and distinguishing himself in legal affairs. Similarly, one who claims to be a brahmana must back up his claim by acting like one.

Today many Indians born in brahmana families are earning their livelihood doing menial service. According to Bhagavad-gita, this makes them sudras. Of course, such work is respectable if done sincerely and honestly, but a person who works in this way cannot claim to be a brahmana. A brahmana is also known as a dvija, “one who is twice-born.” This indicates that a true brahmana takes a second birth by virtue of his knowledge of the Absolute Truth and his dedication to purity of mind, body, and words. Only then is he fit to wear the traditional sacred thread.

Now however, people are simply paying a few cents for a brahminical thread and wearing it as a status symbol, ignoring the responsibilities it entails. We see many sons of brahmanas doing abominable things—eating meat, drinking liquor, associating with loose women—yet insisting they are brahmanas. Many such so-called brahmanas are atheists, in direct contradiction to Lord Krsna’s injunction in the Bhagavad-gita that a brahmana must be religious. Most important, these pseudo-brahmanas perform none of the activities of genuine brahmanas. 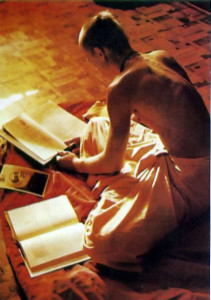 A brahmana must study the Vedic scriptures regularly to remain fixed in his understanding of the Supreme Brahman, Lord Krsna.

In the Seventh Canto of the Srimad-Bhagavatam, the chief of the traditional Vedic texts known as the Puranas, the sage Narada prescribes six basic duties for a brahmana: studying the Vedas, teaching the Vedas, worshiping the Deity form of Krsna in the temple, teaching others how to worship the Deity, accepting charity on behalf of the Lord, and giving charity. The vast majority of today’s brahmanas in India practice hardly any of these activities regularly. And we do not have to search far to find out why. India proclaims itself a secular state, and in a secular state public schools cannot teach religion. Therefore few schools are teaching the Vedic knowledge, let alone the Vedic mantras necessary to perform brahminical duties. Modern children are taught right from first grade that there is no God and that India has to deny its own religious tradition so that it can enter the modern technological world. The result of all this atheistic propaganda is the mess we find our youngsters in today.

So the urgent need is for qualified brahmanas who will teach the science of God in institutions of learning and provide brahminical guidance in institutions of government. Making this ideal a reality is the mission of the International Society for Krishna Consciousness (ISKCON). As Srila Prabhupada writes in his commentary on Srimad-Bhagavatam (7.11.14): “Sometimes [Indian] brahmanas protest against our Krsna consciousness movement for creating brahmanas from Europeans and Americans, or in other words from mlecchas and yavanas [meat-eaters and low-class people]. This movement, however, is supported in the Srimad-Bhagavatam. At the present moment society is in a chaotic condition, and practically everyone has given up the cultivation of spiritual life, which is especially meant for the brahmanas. Because spiritual culture has been stopped all over the world, there is now an emergency, and therefore it is now time to train those who are considered lower and condemned so that they may become brahmanas and take up the work of spiritual progress.” 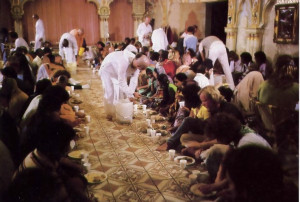 A brahmana must also give charity, as at the Sunday Festival in London, where hundreds of guests receive the greatest of all gifts: the prasadam (mercy) of Krsna in the form of delicious vegetarian dishes prepared and offered to Him with loving devotion.

Despite all criticism and in the face of severe difficulties, Srila Prabhupada succeeded in training genuine brahmanas—brahmanas who actually meet the standards of brahminical behavior set forth in Bhagavad-gita and Srimad-Bhagavatam. The brahmanas in ISKCON are studying these and other books of Vedic knowledge every day, and they are teaching millions of people the importance of this knowledge through widespread book distribution and by other means. They are chanting Vedic mantras, especially the maha-mantra—Hare Krsna, Hare Krsna, Krsna Krsna, Hare Hare/Hare Rama, Hare Rama, Rama Rama, Hare Hare—and teaching others to do so. (Chanting Hare Krsna is the most highly recommended means for attaining spiritual perfection in the present Age of Quarrel.) They are regularly worshiping the Deity of Lord Krsna according to the strictest Vedic standards in nearly two hundred temples worldwide, and they are teaching these standards to newly initiated brahmanas. They are accepting charity from those who receive the transcendental literature they distribute, from friends of ISKCON, and from people who are simply interested in reviving brahminical culture. And they are giving charity by freely distributing prasadam (food offered to Krsna), by renovating holy places, by often giving out literature free, and in general by sacrificing their own comfort and safety to spread the science of Krsna consciousness.

These are just a few of the ways the Krsna consciousness movement is reviving brahminical culture, which is so sorely needed in the world today. We encourage everyone to help in this great task by following the simple principles of Krsna consciousness taught by Srila Prabhupada and his successors, by becoming a qualified brahmana oneself, and by teaching others to become brahmanas. In this way we shall all one day attain our real birthright—a place in the spiritual world as eternal servants of Lord Krsna.