Radio ATMA on the Air in Paris 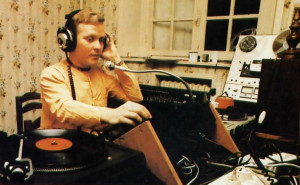 At the studio of the new Hare Krsna radio show in Paris, lndriya-damana dasa directs operations.

Paris—The International Society for Krishna Consciousness now broadcasts music and discussions on spiritual themes to the Paris area. Taking advantage of President Mitterand’s policy of open access to the airwaves for private groups, devotees have mounted an 8,000-watt transmitter on the roof of their temple annex in the suburb of Suresnes and begun beaming Krsna conscious programs around the clock to fifteen million people in and around Paris.

While permission for a permanent station is pending. Radio ATMA 95 has initiated an ambitious broadcast schedule of devotional music, vegetarian cooking classes, yoga lessons, Krsna conscious news commentary, and poetry readings. A popular feature of the programs is a series of debates on such topics as abortion, animal slaughter, social reform, and the origins of life and the universe.

Indriya-damana dasa, director of operations for the programs, receives dozens of calls each week from satisfied listeners. “One woman called today,” he recently related, “to tell us we are the only station that speaks personally and directly to its listeners, and that she recommends us to all her friends.” 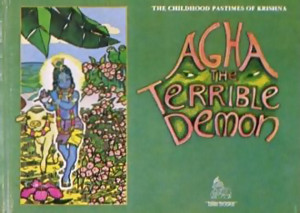 New York—When Lord Krsna conquered the giant serpent Agha five thousand years ago. He rescued His childhood friends from the jaws of the cruel demon. Now the National Council of Teachers of English has chosen Agha, the Terrible Demon, a children’s adaptation of the original Sanskrit story, as recommended reading. The Council has placed Agha on its booklist for parents, teachers, and librarians.

Bala Books, children’s publishers for the Hare Krsna movement, first printed the full-color storybook three and a half years ago. Since then, more than 15,000 copies have been sold. French, Italian, Spanish, and Hindi editions are now in production. 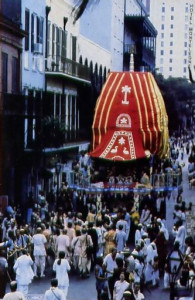 New Orleans—The devotees of four Hare Krsna centers worked together to hold Ratha-yatra, “The Festival of the Chariots,” in New Orleans. Joining in the two days of festivities were devotees from Atlanta, New Orleans, and the Hare Krsna farms in Mississippi and Tennessee. Guest speakers were Srila Kirtanananda Swami Bhaktipada and Srila Jayapataka Swami Acaryapada, who are among the spiritual masters now initiating disciples in the Hare Krsna movement.