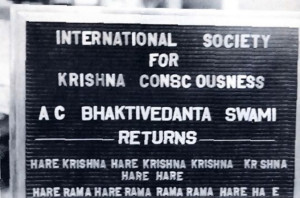 Just hearing that Swamiji was coming back to New York, the devotees, having felt separation from their Spiritual Master, were filled now with so much bliss. Their joyful shouts of “Haribol!” filled the temple at Kirtan. 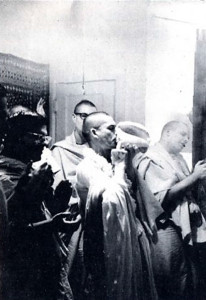 On the day Swamiji was to arrive, the temple was swarming with activity like a beehive. After morning Kirtan, Hansaduta and Brahmananda gave everyone some task to help prepare things. The brahmacharinis made garlands of flowers, and the brahmacharys cooked a feast. Others made a banner, cleaned the temple, arranged for transportation. 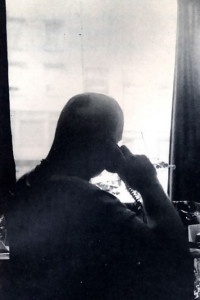 By noon all preparations were finished and the devotees took Prasadam, their spiritual food. Gargamuni called from San Francisco to say that Swamiji was on the plane, flying to us. In this way the Swami encircles the world with Krishna Consciousness. 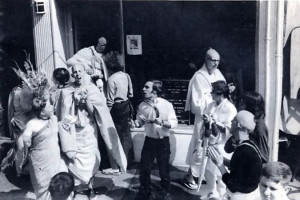 A bus and a van arrived to take us to the airport. All the transcendental paraphernalia was loaded into the van. The devotees filed out of the temple, and a joyous Kirtan started. At this time many friends of the Society were arriving, anxious to meet Swamiji with us, and so there was a nice crowd. 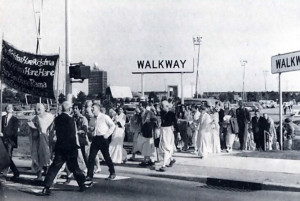 Finally Brahmananda got everyone onto the bus. The caravan to Kennedy Airport began, a saffron-robed brahmachary driving a van of devotees, all chanting Hare Krishna along the Van Wyck Expressway. Arriving at the Airport, the devotees paraded into the American Airlines Terminal, before them a green-and-yellow banner displaying the Holy Names of God. Inside the Terminal, chairs were pushed aside and a rug was put on the floor. A garlanded painting of Radha-Krishna was set upon an easel, and surrounded by vases of flowers. In front of all this, candles and incense were lighted. Hansaduta, playing a mridangam drum, led Kirtan. A crowd of spectators and American Airlines officials watched as the devotees danced in ecstasy to the Holy Names of the Lord. 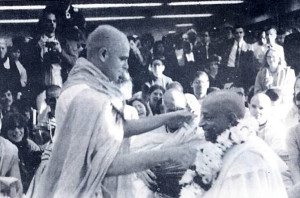 Finally Swamiji’s plane arrived, and the Swami stepped out into the Terminal Building and walked over to the seat prepared for him, as all the devotees offered their obeisances. Brahmananda, Purushottam, Rayarama, Balai, and Himavati offered garlands to him, and gasped with joy as Swamiji touched their heads in approval. 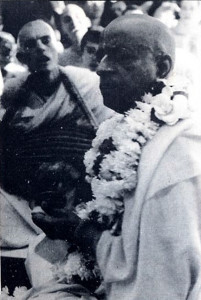 Then Swamiji was offered his khartals, and he led Kirtan. After this he lectured to the assembled people:

“God has got millions and trillions of Names,” he said. “Lord Chaitanya recommended that we chant the Name of God. He chanted Hare Krishna, and so we also chant Hare Krishna. But if you don’t like the Name Krishna, you can chant any Name of God that you have got. This chanting of the Lord’s Names is the only means to peace and prosperity in the world.”

Swamiji would have like to talk a little longer, but the Airline officials said they must prepare for the next flight, so everyone got up to leave. 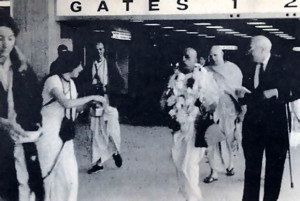 There was a procession out of the airport, Annapurna and Kanchanbala strewing rosewater and rose petals in Swamiji’s path as he walked to the car followed by news reporters.

In the car, driving toward Manhattan, with its giant skyline flashing up above the horizon, the discussion turned to Maya, Illusion. “Maya seems to be getting stronger these days,” Mr. Kallman said, as he drove the Swami along.

He went on to say: “The achievements of modern civilization are like Zeros. So many nice things, all just like Zeros. There are so many Zeros, but they still only add up to Zero. But then, if One is added, all the Zeros have some value. That One that has to be added is Krishna. If Krishna is there, so many Zeros with One in front of them will add up to a very substantial accomplishment.”

Now they were in front of the temple. Swamiji got out of the car and went inside where all the devotees and friends of the Society were sitting. Upon seeing Swamiji, everyone bowed down to pay obeisances to him, and he went upstairs to his apartment. 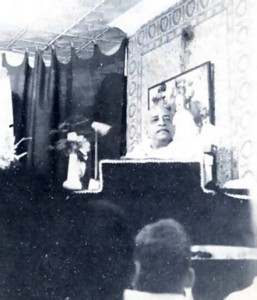 Sitting in his room, many garlands still about his neck, Swamiji said: “Now I am home! I can never forget this apartment, because this is where I started my mission.” He was beaming happily, looking about the small three-room flat which his disciples had painted and cleaned only days before. “When I left, I was very much fearful that the Society would diminish. But instead, it has increased. I am very much pleased.” Swami gave Brahmananda and Rayarama a garland each, and come downstairs to speak at Kirtan. Our joy cannot be described in words or pictures or photos. The pure devotee was pleased. It was a most auspicious day.