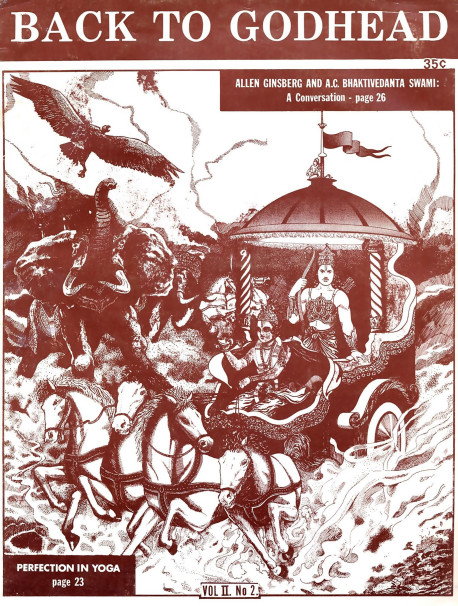 Modern historians differ as to the age of the various Vedic Scriptures, but the Scriptures themselves seem to agree that they were formally compiled five thousand years ago. Vyasadeva, the greatest of great sages, took the vast and voluminous teachings of the Absolute, which had been handed down by word of mouth since time beyond measure, and committed everything to writing for the benefit of modern man. It is on this literature that the Hindu religions of later times have been based. One of the more important of the works thus handed down to us is the Mahabharata, the chronicle of the last ages of Earth up to the commencement of the present era, called Kali Yuga, or the Age of Dissension.

The most significant event in the previous age was the Appearance of the Supreme Lord, Sri Krishna, upon this planet, and the display by Him of His eternal Qualities, Pastimes, and Paraphernalia. Among His other acts, the Lord took part in the Kurukshetra War as Charioteer for His beloved friend Arjuna, and it is engaged in this activity that He is pictured on this month’s cover.

Unwilling to take the part of an active combattant, Sri Krishna offered to lend His army to one side in the conflict, and His Personal friendship to the other. Arjuna’s enemies chose God’s energy, while the devoted Bowman chose God’s friendship. This is a lesson to Mankind, one he seems never to comprehend: for it was Arjuna who triumphed at Kurukshetra, after eighteen days of bloody fighting. Thus the great devotee broke the power of the atheist King Duryodhana, and established the just reign of his own brother, Yudhisthira.

Yudhisthira’s nephew, Maharaj Parikshit, was the last ruler of this world before the onset of Kali Yuga. In a sense, the Battle of Kurukshetra marked the real ending of Dwapara Yuga, the Middle Age, though the virtues of both Yudhisthira and his nephew staved off the darkness for some time.

More important than the Battle or the flux of the Ages of Earth, however, is the transcendental message of love, devotion, peace and supreme glory which is revealed in the great dialog between Krishna and Arjuna which took place just before the onset of the fighting. This dialog is called The Bhagavad Gita. This is the science of the Eternal, which the Lord chose to deliver in this fashion at Kurukshetra, and one who studies this science, like Arjuna, will know “opulence, victory, extraordinary power, and morality,” and will stand beyond the clutches of Death. And, again like Arjuna, the devotee by his love can engage the Supreme Lord to steer him through all danger.