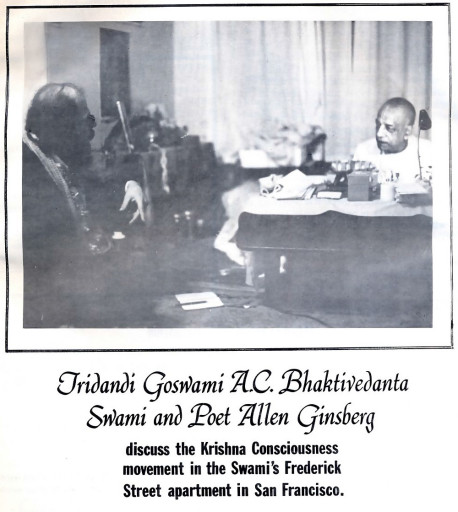 Swamiji had come to San Francisco in late January, 1967 for the opening of the Krishna Consciousness Temple there, at 518 Frederick Street. Allen Ginsberg had always shown friendly and helpful interest in the Society; and he agreed to attend a giant “Mantra Rock Festival,” which the temple members were planning to hold in the Avalon Ballroom. And so, a few days before that event, the good poet came to early morning Kirtan (7 A. M.), and later joined the Swami upstairs in the apartment his pupils had rented for him. 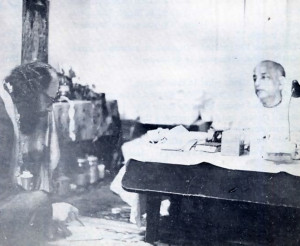 We were sitting in the glow of this holy man, munching on Indian sweetballs cooked by the Swami, when Allen Ginsberg came through the door, a warm smile on his face.

The Swami offered him a sweetball: “Take.”

They sat in silence for a few moments, radiating mutual love.

SWAMIJI: Allen, you are up early.

GINSBERG: Yes. The phone hasn’t stopped ringing since I arrived in San Francisco.

SWAMIJI: That is what happens when one becomes famous. That was the tragedy of Mahatma Gandhi also. Wherever he went, thousands of people would crowd about him, chanting, “Mahatma Gandhi ki jai! Mahatma Gandhiki jai!” The gentleman could not sleep. 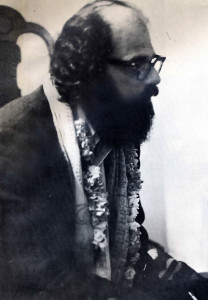 GINSBERG: (smiling) Well, at least it got me up for Kirtan this morning.

SWAMIJI: Yes, that is good.

A few days before, the San Francisco Chronicle had published an article called “Swami in Hippie Land,” in which the reporter had asked: “Do you accept ‘hippies’ in your temple?”

The Swami had replied, “Hippies or anyone—I make no distinctions. Everyone is welcome.”

SWAMIJI: Allen, what is this “hippie?”

GINSBERG: The word “hip” started in China, where people smoked opium lying on their hips. [He demonstrates.] Opium and its derivatives then spread to the West, and were looked down upon by the people in power, who were afraid of the effects. As a result, the hip people created their own culture … language, signs, symbols.

San Francisco is a spiritual “shivdas” [meeting ground]. The word hip has changed into hippie today. But basically, Swamiji, the young people today are seekers. They’re interested in all forms of spirituality.

GINSBERG: The hippies will all fall by at one time or another.

There was some discussion regarding New York’s Lower East Side and the Haight-Ashbury in San Francisco—both of which are locations of Krishna Consciousness temples, and are well-known to Allen Ginsberg. Then:

SWAMIJI: You have not had LSD, Allen?

GINSBERG: I have had it.

SWAMIJI: It is dependence, Allen.

SWAMIJI: Krishna Consciousness resolves everything. Nothing else is needed.

They then discussed the upcoming dance at the Avalon. Allen Ginsberg felt that certain mantras would be more palatable to American ears than others, and that he would like to try his tune at the dance. Swamiji agreed: “Very nice.”

Poet Ginsberg said he was not yet ready to become a devotee, but that he chants the Maha Mantra every day, and will do so until he leaves this Earth. The Swami thanked him for the work he’d already done in spreading the Kirtan (Krishna Conscious) Movement, and assured him that, if he chanted Hare Krishna daily, “everything will be perfect.”

Allen Ginsberg then prostrated himself, and, touching the Swami’s feet, he symbolically wiped the dust from them onto his forehead. Then, with a few sweetballs in a paper bag under his arm, he took his leave.