On July 27th, 1969, at the corner of Haight and Ashbury, a massive three ton car stood above a huge crowd of people; they had gathered from all around the country to witness the third annual Rathayatra Car Festival held by the International Society for Krishna Consciousness. The Krishna Consciousness devotees had constructed the two and a half stories high car, called a ratha, which was to transport the Deities Lord Jagannath, His Sister Subhadra, and Brother Balaram to the ocean. The three Deities were already on the upper level of the car and were smiling upon all members of the crowd. 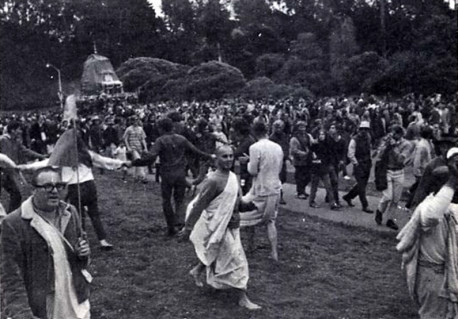 The bottom level contained several devotee-musicians and loudspeaker equipment. The second level consisted of a narrow walkway running around the one and a half story high Orissan dome, which was covered in magenta-pink silk and embellished with a giant, golden lotus. All sides of the cart were decorated with trappings of silks, satin, and heavy brocades in different colors. From the second level, two huge pots were spewing transcendental flavored clouds of frankincense over the crowd. Thirty twenty-five foot long garlands of carnations, gardenias and roses were wound around the gold railings and around the columned first level. 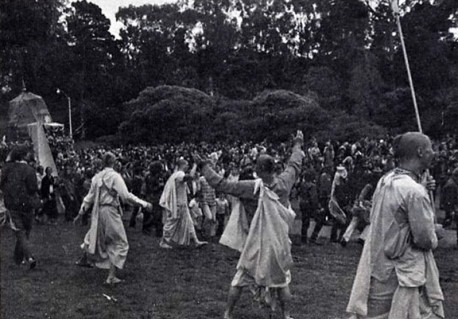 The chanting of the Hare Krishna Mantra was already nicely underway as everyone stood around the car on Haight Street, anxiously awaiting the arrival of the spiritual master, His Divine Grace A.C. Bhaktivedanta Swami. Suddenly the Krishna Consciousness devotees began madly jumping up and down in an extraordinary ecstasy, crying out “Prabhupada! Prabhupada! All Glories to Sri Guru! All Glories to Srila Prabhupad! Haribol! Haribol!” Then His Divine Grace A.C. Bhaktivedanta Swami Prabhupada emerged from a car which had cautiously nuzzled its way through the crowds up to the side of the great ratha car. Purple velvet steps were lowered onto the street by the devotees, and the Golden Guru rose up onto the ratha’s opulent throne, just below the Deities. Garlands of roses and gardenias were placed around his neck, and quantities of rose petals were tossed at his lotus feet. Then hundreds of people fell down on the ground, paying their humble obeisances and respects to His Divine Grace, for the inevitable ecstasy which was to take place on that Holy Day. Beneath the Lotus Feet of Lord Jagannath, the Lord of the Universe, His Divine Grace spoke the following words: 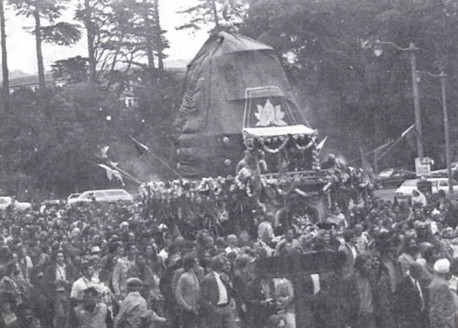 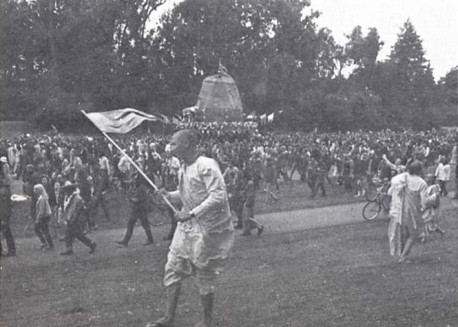 “This inauguration of Rathayatra Ceremony will bring a new chapter in the history of the world—it is that potent. It is stated in the Vedic literature that anyone who sees Lord Jagannath seated on this car will no more have to take birth within this miserable material world. 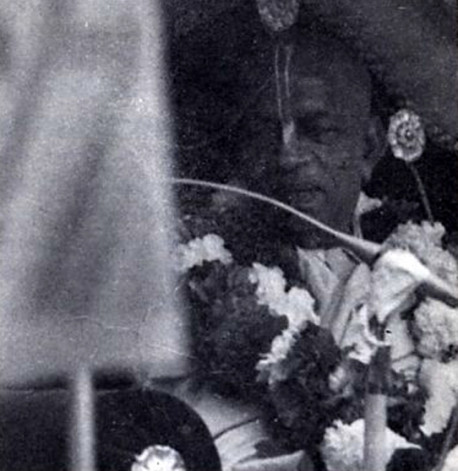 “Perhaps you saw in the San Francisco Chronicle that when I landed at San Francisco airport a reporter asked me my opinion of the landing of your American people on the moon. I asked him whether I should give my frank opinion. He said, “Yes.” So I replied that it is “simply a waste of time.” If you actually want to transfer yourself from this planet to another planet, then you must follow the principles of the Bhagavad Gita. In the Bhagavad Gita you will find a nice verse which says that there are innumerable planets, not only in this one universe, but there are innumerable universes also. In each of these universes there are millions and trillions of planets, and each planet has a different atmosphere. So even if you go to the moon, you will not be happy there, because everywhere in the material universes the four principles of material conditioning are always present. They are birth, death, old age and disease. But Krishna says that, if one goes back to My Supreme Planet, which is called Goloka Vrindaban, he will never have to come back to this miserable condition of life. This Krishna consciousness movement is to take you to the highest state of eternal bliss and knowledge. It is not a sentimental movement, but is the practical means of perfect spiritual realization. If within this life you practice Krishna consciousness, then you will very easily be able to go to Goloka Vrindaban and have your blissful life, eternal and full of knowledge. You should start this process today. Simply chant Hare Krishna, Hare Krishna, Krishna Krishna, Hare Hare/ Hare Rama, Hare Rama, Rama Rama, Hare Hare. I request you to follow this car of Lord Jagannath, and make progress in your life to Goloka Vrindaban, instead of wasting your time for the moon planet. Thank you very much.” 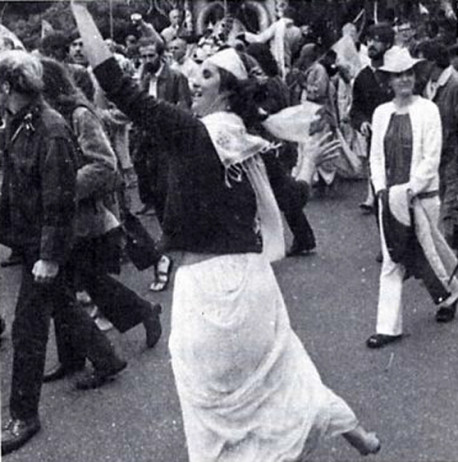 After this divine message was presented, there were shouts of “All Glories to Prabhupada, the Golden Vaishnava! Jai! Jai!” and obeisances were again offered. The ratha then began to roll down Haight Street towards its destination, through Golden Gate Park to the Great Ocean Highway. Thousands present began chanting Hare Krishna, the Great Chanting for Deliverance: Hare Krishna, Hare Krishna, Krishna Krishna, Hare Hare/ Hare Rama, Hare Rama, Rama Rama, Hare Hare. Approximately 100 Krishna devotees were dispersed among the constantly increasing crowd, some holding flags, banners and instruments. A 10 foot high picture of Sri Chaitanya Mahaprabhu, the Incarnation of Krishna who inaugurated the Hare Krishna Movement 500 years ago in India, was being carried 100 feet in front of the ratha. On the ratha the musicians and singers were leading the ecstatic chanting with mridungas, kartals and harmoniums. The ratha was being pulled by many men, by means of long ropes which extended in front of the car; and ropes behind the car were used to slow it down while going downhill. 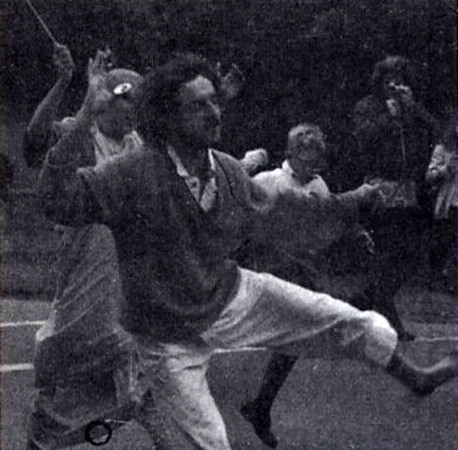 As the joyous procession proceeded through Golden Gate Park, the crowd increased to about 8,000 persons, many of whom had, by chance, been in the park and were drawn by the transcendental sights and sounds of the parade. The ecstasy in all hearts culminated when the mighty ratha halted at the entrance of a bridge above the road in the park. Thousands swarmed into the echoing bridge and breathlessly beheld His Divine Grace stand up from his throne. With arms upraised, he began to dance before the Lord of the Universe. Namah Om Vishnu Padaya Krishna Presthaya Bhutale/ Srimate Bhaktivedanta Swamin Iti Namine. Everyone was then crying and screaming out the Hare Krishna Mantra, along with fervently felt obeisances to His Divine Grace. There can be no adequate description given here of the splendrous dance done by His Divine Grace at this time, or of the joy experienced by all of those who witnessed this holy scene. As Prabhupada has often instructed—and proven—to his disciples throughout the world, the constitutional position of every living entity is to be ecstatic and joyous in glorifying and rendering loving service unto Krishna (one of whose Names is Jagannath). The many persons who were for the first time coming into contact with the Hare Krishna Movement also got a taste of the nectar pouring forth from Krishna Consciousness. 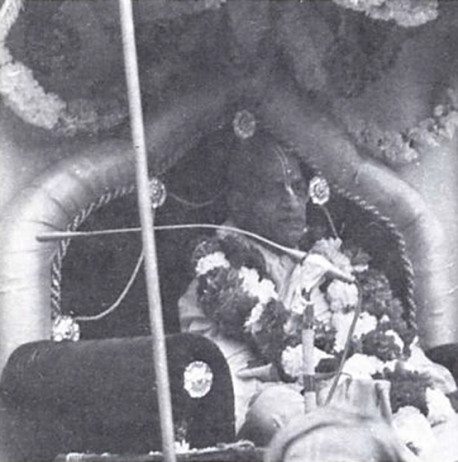 The ratha then proceeded past the bridge and along its pilgrimage to the ocean. At the ocean, another 2,000 people who had been awaiting the arrival of the car joined the crowd, now numbering approximately 10,000. When the ratha finally came to a halt, Prabhupada delivered another message regarding the importance of developing spiritual life. 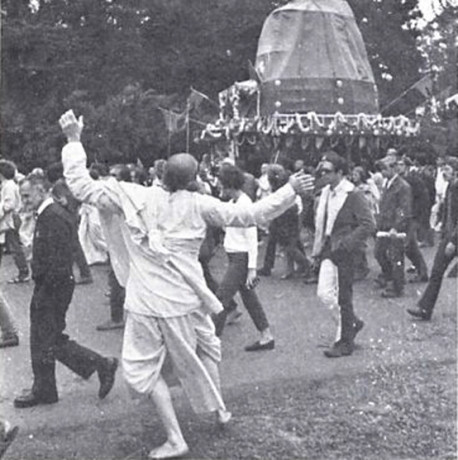 “My dear American boys and girls, I thank you very much for your taking part in this great ceremony known as Lord Jagannath’s Rathayatra Ceremony. This ceremony is performed every year for the last 2,000 years or more in India, and in your country perhaps this is the third year of performing this great Rathayatra Ceremony. We are also performing this ceremony in Boston, London, New York and Columbus. The purpose for this Krishna consciousness movement is for invoking your dormant love for Jagannath, the Supreme Personality of Godhead. Every one of us, not only human beings but every living entity including birds, beasts and aquatics, is part and parcel of the Supreme Personality of Godhead. And just like a son has the right to inherit the property of his father, so we have the prerogative to achieve the status of our Father, the Supreme Personality of Godhead. This status is called Sat-Chit-Ananda Vigraha. Sat means eternal, chit means complete in knowledge, ananda means bliss, and vigraha means person. As we are all persons, so the Supreme Personality of Godhead is also another Person, but He is very, very great. And He being the greatest, He supplies the needs of all other individual persons. We have a relationship with Lord Jagannath, and we are meant to participate in His qualities of Sat-Chit-Ananda Vigraha. This material life is just the opposite conception of our life with Lord Jagannath. This body is full of misery, it is temporary, and there is no complete knowledge. This Hare Krishna Mantra will gradually lead you to the status of your Supreme Father, Krishna. Don’t think this is any sectarian movement. It is the postgraduate study of all religions. In the Srimad Bhagavatam it is said that the first-class religion is that which teaches you to invoke your dormant love of Godhead. Now our love is distributed in so many different channels, but this love should all be concentrated upon Krishna, the Supreme Lord. Kindly chant this Hare Krishna Mantra—we do not charge anything. This is not a business; we are giving you everything for free. So please take part in this movement. Come with us. We simply request you to chant Hare Krishna, Hare Krishna, Krishna Krishna, Hare Hare/ Hare Rama, Hare Rama, Rama Rama, Hare Hare, and come with us; and you will see how your life will be sublime. You will feel eternity, all blissfulness, and you will know everything. I have spoken about landing on the moon; but if you come to Krishna consciousness, you will know not only what is on the moon, but you will know the condition of all the planets in the material sky, and you will want to go back to Goloka Vrindaban in the Spiritual Sky. 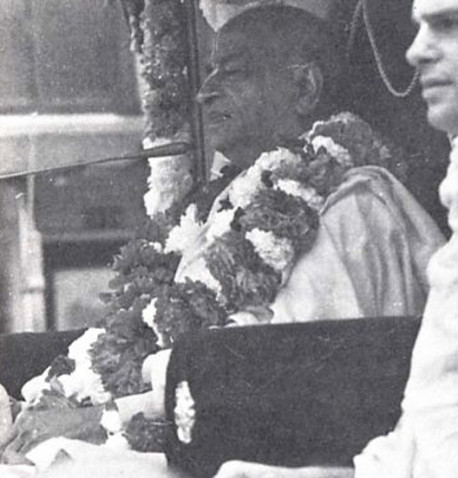 “If you would like to understand this science of Krishna consciousness, we have many books, such as Bhagavad Gita As It Is, Srimad Bhagavatam, Teachings of Lord Chaitanya, Nectar of Devotion, plus we have a monthly magazine, ‘Back To Godhead.’ But if you have no time to read, kindly chant Hare Krishna, Hare Krishna, Krishna Krishna, Hare Hare/ Hare Rama, Hare Rama, Rama Rama, Hare Hare. In this mantra the whole spiritual power is given. It is for everyone. Our only request is that in whatever condition of life you are in—it doesn’t matter—you don’t have to dress like us, no; wherever you are, remain there, but just chant this Hare Krishna Mantra. Thank you very much.” 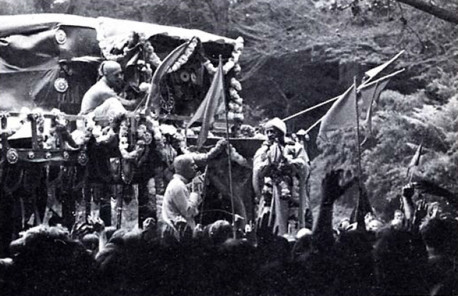 Many of the Krishna devotees had been at the ocean for several hours and had managed to put together 10,000 plates of delicious, sumptuous, transcendental Krishna Prasadam—foodstuffs offered to and eaten by Jagannath and left as Divine Remnants for His part and parcel children to taste in bliss. While many of the crowd’s members went to the shore to bask in the glory of chanting beneath the open sky, several thousand others gathered into the Family Dog Auditorium where His Divine Grace had been escorted. He was seated on a stage that had been transformed into an altar to Krishna, complete with pictures, incense, candles, and throne. Kirtan was held and all the people who were newly exposed to the chanting actually felt spiritual bliss. The chanting by the ocean proceeded into the night, and finally the crowd began to disperse. Since this Rathayatra Day Ceremony, many new people have decided to dedicate their lives to the pursuit of Krishna Consciousness, and it is hoped that by the Mercy of Lord Jagannath many more will come to understand the reality and the utmost importance of spiritual life in Krishna Consciousness. 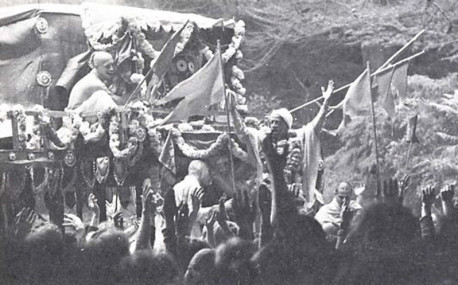 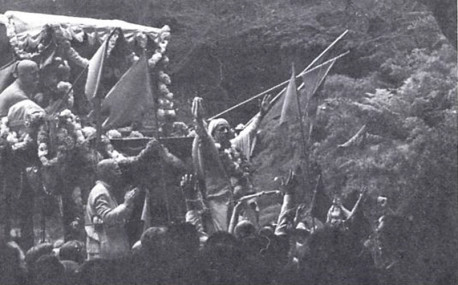 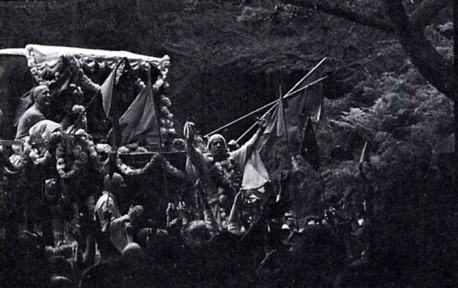