Another Version of the Rathayatra Festival 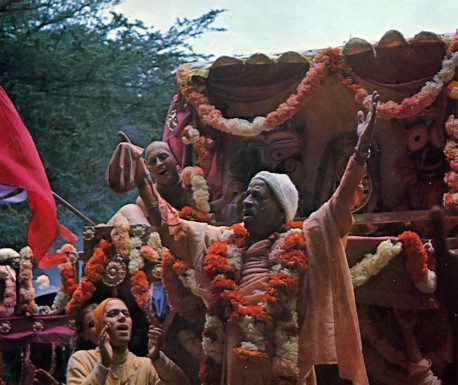 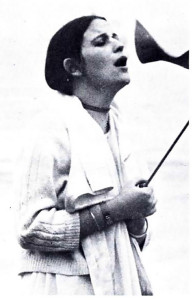 On July 27th, 1969 in San Francisco the most powerful spiritual celebration the bay area has ever known, the Rathayatra Festival, took place. I cannot do justice to the splendor and power of this magnificent celebration in a written article, for words cannot describe the nectarean beauty of the holy day glorifying the Jagannath Deities. I will try, however, to reflect a glimmer of what took place.

Every year for the past 2,000 years the Rathayatra Car Festival has taken place in Jagannath Puri, India. The transcendental Rathayatra Car carries worshipable Forms of Lord Krishna who is Lord Jagannath, accompanied by His Brother Balaram and His Sister Subhadra. The brightly colored Deities are enchanting to behold; and on this auspicious day they are brought out from the temple and carried on the carts from the town to the ocean, with millions of souls chanting and dancing and beholding the splendor of God on His jaunt to the ocean. Sometimes many devotees are so carried away that they throw themselves under the wooden wheels of the cart and kill themselves. Actually, no one dies; only the body is killed. The soul lives eternally and is unchanging. Actually everything rests in Krishna and He is in full control of everything. It is simply His causeless mercy that He allows His devotees to pull Him regally to the sea for Rathayatra, so that countless living entities can get the chance for liberation by viewing the cart, singing, dancing and taking His prasadam. 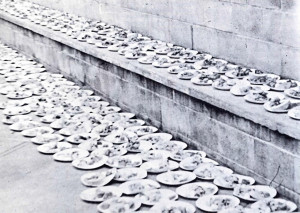 Through the mercy of our spiritual master, A.C. Bhaktivedanta Swami, this wonderful celebration of God is becoming popular in the United States. This is the third year in a row that the Rathayatra Festival has taken place in San Francisco. We fortunate souls who are able to take part in such heavenly celebrations are truly grateful.

The day of the festival was, at first, a bit foggy, but warm. At noon, hundreds of people were gathered at Haight and Ashbury Streets, waiting for the wonderful celebration to begin. All of a sudden the sounds of kartals, drums and chanting could be heard; then out of the blue the most beautiful sight came moving down the street. A huge 5,000 pound wooden cart, with a purple silk canopy and a golden lotus flower decorating the front, was carrying the Supreme Personality of Godhead and His relations and devotees. Multicolored flags fringed with gold tassels were dangling all around the cart. Pictures of Krishna and Prabhupada were on the cart, and these were carried in the hands of devotees. They came marching joyfully along the street with saffron robes and gleaming shaven heads, chanting Hare Krishna, Hare Krishna, Krishna Krishna, Hare Hare/ Hare Rama, Hare Rama, Rama Rama, Hare Hare. Pulling the cart were the world’s greatest men, who had worked heart and soul to create this cart for God to ride upon. This is confirmed in the Vedic scriptures, that the greatest are they who have become devotees of the Supreme Brahman—Lord Krishna—and who constantly engage their energy in His transcendental loving service.

The cart, with devotees surrounding it, stopped and waited on the corner of Haight and Ashbury for the spiritual master, His Divine Grace A.C. Bhaktivedanta Swami, to make his appearance. He is the only spiritual master who is offering pure love of God, Bhaktiyoga. He has taken us fallen souls under his fatherly arm and given us jewels of love and truth. Blessed be this pure devotee of God. Prabhupada stepped out of his auto and spoke a few words about Krishna consciousness and about men landing on the moon. He said going to the moon was a waste of time, because the only planets worth going to were Krishna Loka and the Vaikunthas, which are impossible to reach by material pursuits. They can only be reached by pure devotees of Krishna. One should hanker for the Kingdom of God, Krishna Loka, not landings on material planets which are temporary and destined for annihilation, as are all material universes. Only spiritual planets are eternal, as is the nature of our soul. The sound of the spiritual master’s voice can enlighten one more and more each time one hears it, as it is coming straight from the transcendental world.

Prabhupada mounted his throne and his lovely neck was bedecked with sweet-smelling flower garlands. Then the cart began to move down Haight Street. The procession entered Golden Gate Park, and we danced, with the chanting building louder, and everyone constantly stealing glances at the Deities and Prabhupada. When we got to the tunnel the cart stopped at the entrance and there seemed to be hundreds more people now. Prabhupada stood up before the tunnel-bridge and spoke, then chanted and then began to jump up and down. His ecstasy is purely transcendental, as if God is lifting him in His own Arms. Prabhupada is so merciful to let us behold his joy for God in that manner. All the people in the tunnel and all around began to jump up and down chanting Hare Krishna. Krishna’s love seemed to be pouring all around the area like falling rain, washing away the dust in our hearts and bringing in new light, pure joy of the sound of God’s Name, Hare Krishna, Hare Rama.

At times I pulled the rope to the cart and felt a renewed closeness with my Godsisters and Godbrothers. We later marched down Irving Street and passed the house where I grew up. Life seemed to flood fuller into my heart, for I was once a lost little girl crying for a love that was pure, and now through Prabhupada I have found a way to love God—who is the purest. I lifted my eyes and arms to the skies in a prayer of thankfulness.

When we got closer to the beach it seemed as if thousands more had joined in. All the people had literally danced and chanted the whole way, about three miles, not growing tired, but being reborn from the energy given off by resounding God’s Name. The more you chant God’s Name the more love and energy He gives you.

At the beach the holy cart found a resting place after much going back and forth. Prabhupada went into the auditorium to lecture on Krishna consciousness and to hold kirtan. Some of the devotees went inside while the other devotees served spiritual prasadam on the ocean wall. Barrels and barrels of sweet rice, simply wonderfuls, fruit salad and apple chutney were served to thousands of people. It seemed as if the entire city was being served prasadam by devotees. I never saw so many eating together. Everyone had blissful expressions on their faces, because they were tasting the most delicious foodstuffs, Krishna’s mercy.

Inside the Family Dog Auditorium, Prabhupada was imparting the essence of Krishna consciousness to the audience and telling them the importance of the Hare Krishna Maha Mantra, the benediction moon in this Age of Kali. He was humbly requesting everyone to take part in this movement and to see how nice it is. The devotees were on a platform facing Prabhupada, and all sang and danced as Prabhupada led kirtan.

Seeing Prabhupada sitting there and beholding his beauty and chanting to him my humble obeisances brought me mounting pleasure. More and more I could realize that only Prabhupada’s teachings can save our fallen souls from misery and lift us to the spiritual platform of loving service to Krishna. Prabhupada is a bona fide representative of God on this planet earth, and we must surrender fully to him—and only then can we begin to know Krishna.

Next there was a beautiful puppet show about Krishna and His friends and some demons who try to kill Krishna. The puppets sang Hare Krishna and were accompanied on flute so beautifully sounding, as if Krishna Himself were playing in Vrindaban Forest in the spiritual sky.

Prabhupada left after the puppet show. and the feasting and chanting continued in the auditorium and on the beach.

When I left I caressed the transcendental cart of Lord Jagannath and did not want to part from it, for this colorful transcendental creation was Krishna Himself. I will never forget this Rathayatra Festival, for it brought me closer to my most dearly beloved spiritual master, to Radha Krishna and to the dear devotees—and the whole world.

Next year I pray it will be a worldwide festival so all of God’s children can behold the truth and beauty of their Creator and begin the march back to home, back to Godhead. 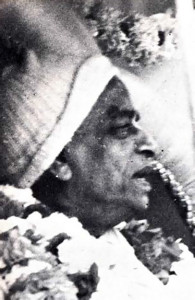 In Nectar of Devotion Prabhupada says, “It is stated in the Bhavisya Purana: ‘A person who follows the Rathayatra Car while passing the rathas in front or from behind, even if born of a lower grade family, will surely be elevated to the position of achieving equal opulences as Vishnu.'” Thousands of people stood and watched the Rathayatra Car Festival pass by and thousands more followed the car, chanting and shouting and dancing Hare Krishna all the way from Haight and Ashbury to the beach. As Prabhupada explains to us, it is not necessary to understand how it is that when you touch fire you get burned; whether you understand or not the result is the same, you still get burned. Similarly, when one stands up while the Rathayatra Car is passing or one follows the Rathayatra Car Festival one gets liberated whether he understands or not. 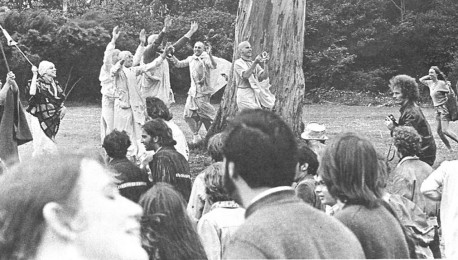 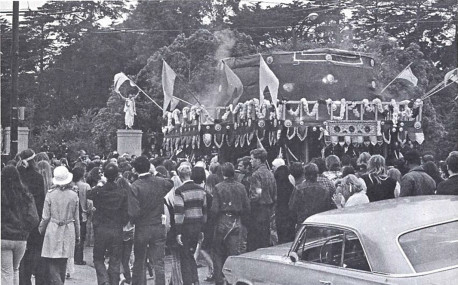 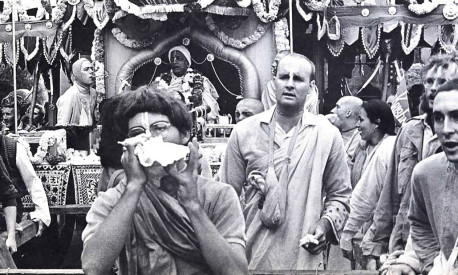