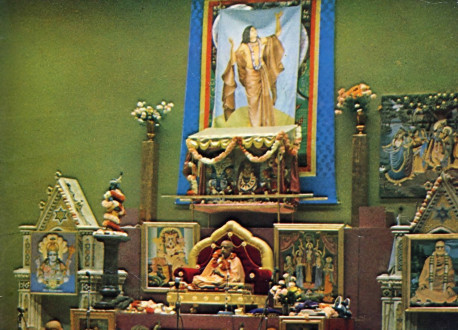 His Divine Grace delivers the Rathayatra Festival address at the Family Dog auditorium in San Francisco.

My dear boys and girls, I thank you very much for joining us on this Rathayatra Ceremony. I am going to sing an Indian song and then I will explain it. Even if you don’t understand the language of the song, still, if you kindly hear patiently, the sound vibration will act. The song begins 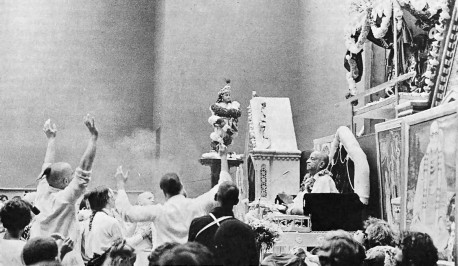 The author’s name is Narottam Das Thakur. He wrote many songs. We are gradually translating them into English, and will have them in our magazine, “Back To Godhead.” The purport of this song is—Sri Krishna Chaitanya Prabhu Dayanoramoray—my dear Lord Chaitanya, please be merciful upon me. I do not find anyone as merciful as You. You can see the picture of Lord Chaitanya on the altar—that is Lord Chaitanya dancing. He, the Supreme Personality of Godhead, appeared as a devotee. You have heard of the Bhagavad Gita. In that scripture the last instruction given by Krishna, the Supreme Personality of Godhead, is that He is asking everyone, “My dear sons, please understand, God is Father.” That is accepted in every religion. Especially in your Christian religion: God is the Supreme Father. In the Vedas also it is said, nitya nityanam chaitanyas chaitanaram, etc. The Supreme Absolute is also a living entity like us. Your material father, from whom you have this body, he is also a person, and you are also a person. You are the son of your father. Similarly, although you cannot see God, you can understand from the version of the Vedas and authoritative scriptures that, if God is the father, then He must be a Person. He must be a Person, because I am person. We have to study by analogy, by our reason, our intelligence. You have experience in this life that your father is a person, and you are also a person. The relationship is that I am his son, he is my father, yet both of us are persons. None of us is imperson. Such a conclusion is nonsense. How can my father become imperson if I am a person? This idea is nonsense. Therefore the knowledge of those who are impersonalists is not yet perfect. They do not actually know what is the situation of their Father. 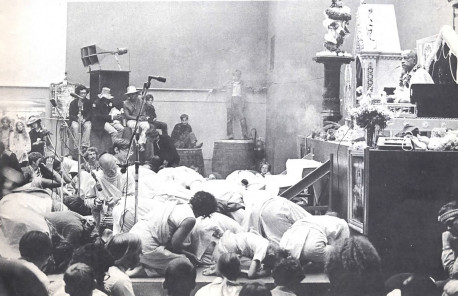 The Supreme Father is a Person. It is confirmed in the Vedas, nitya nityanam chaitanyas chaitanaram; He is the Supreme Eternal of all eternals. We are all eternal. Each living entity is eternal. Death means the end of this body. We are dying at every moment as our bodies change. So this death means death of this body, not of the spirit-soul. The spirit-soul is eternal. God is eternal, and I am His son, you are His son; you are also eternal. Just as a small particle of gold is also gold, similarly the part and parcel of the Supreme Lord is also God. It is said that we are partly God, and He is the Supreme God. That is stated in the Vedas: nitya nityanam chaitanyas chaitanaram; He is the Supreme Eternal among all the eternals, and He is the Supreme Living Creature among all living creatures. Supreme, that is the difference. The quality of God and the quality of you and I is the same. If you chemically analyze a small portion of the ocean water, you will find the same chemical composition as in the vast ocean. Similarly, as a living entity you have all the qualities of God in minute portion. Therefore He is Supreme. We have all the qualities of God, but in very minute portions. So He is Supreme. We are subordinate. Therefore in the Vedas it is said that the living entities are maintained by the Supreme Lord. That you can understand by your practical experience. There are millions and trillions of living creatures. The human society is only a small portion of all the living species. If you take a portion of a drop of the Pacific Ocean, how many aquatics are there? There are, in total, 900,000 species of aquatics. There are 8,400,000 species of living creatures, and all of them are being maintained by God, the Supreme Lord. We are also being maintained: but because we have become “advanced in knowledge,” therefore, the result is we have forgotten God. This is the result of our education. The more you become advanced in so-called knowledge the more you forget your relationship with God. Actually, this is not knowledge. In the Bhagavad Gita it is said that the knowledge is already taken away by Maya from those who are atheists, or Godless. They are so-called men of knowledge, wise men. But actually they are fools, rascals the atheists. This is the statement of Bhagavad Gita. They are called Naradhamas, the lowest of mankind. Nara means man, and adhamas means lowest. The lowest grade of man denies the existence of God. As we are forgetting our eternal relationship with God, so we are gradually degraded to the lowest position of living creatures. Our knowledge has no value. Anyone who is atheist, who has no knowledge of God, has no good qualifications. These are the statements from the scriptures. 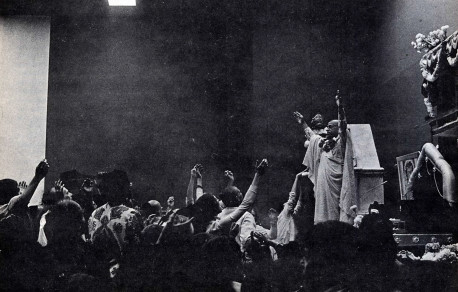 Sri Krishna Chaitanya Prabhu Dayanoramoray. In this age we ask the Mercy of Lord Chaitanya because we have all forgotten our relationship with God. We still have dormant love for God. Just as a son and father—the son may forget, he may become a crazy fellow and go out of home, but that does not mean that his relationship with his father is broken. That is not possible. Even if he is a crazy fellow, when the father dies the son may still have the right to inherit the property of the father. The relationship is that strong. We may try to forget God due to our craziness, but the relationship cannot be broken. God is so kind, He comes Himself, He sends His bona fide servant, He sends His son. In so many ways He is always canvassing, “My dear sons, do not suffer in this abominable condition of material existence. Come back to Me. Come back to Home. Enjoy eternal life, blissful life, life of knowledge.” That is God’s business, therefore He is all-merciful. In spite of our being disobedient and forgetful, He does not forget. He says, “Whenever there are discrepancies in the religious processes, and when there is predominance of irreligiousness—I incarnate.” As for what is religion and what is irreligion, that is stated in the Bhagavad Gita. Krishna says, “I come to establish religion,” and again He says, “Give up all sorts of irreligion.” Religion means surrendering to the Supreme Personality of Godhead. Any other religion is not religion, but is bogus. We have concocted so many religious principles, but real religion is that which teaches to surrender to God, to love God. That is real religion. That is what we are teaching. Our Krishna consciousness movement is no sectarian movement. We don’t say that this is Christian religion or Hindu religion or Mohammedan religion or Buddhist religion. These religions develop in different parts of the world under different conditions. They give some idea of our relationship with God. But real religion is that which teaches how to love God. If by following certain religious principles you develop your dormant love of God, then that is first-class religion. That development is without any reason. It is not that you love God because He supplies bread: “Oh God, give us our daily bread.” No, there is no exchange like that. There is no reason why I should ask. God is great, I am His part and parcel; it is my duty to love Him. When you develop this consciousness, it is called Krishna consciousness. Try to understand this philosophy of Krishna consciousness. 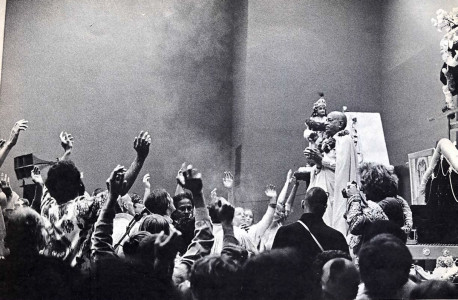 It is not a new thing. Krishna consciousness philosophy was taught 5,000 years ago. Bhagavad Gita is the philosophy of Krishna consciousness. Although it was written down 5,000 years ago in history, within the Bhagavad Gita it is stated that It was spoken some millions of years ago to the Sun-god. Apart from that reference Bhagavad Gita is eternal, because it teaches what is your relationship with God, what is your eternal duty to God, and what is the ultimate end of life. The last instruction of the Bhagavad Gita is that one has to give up all sorts of rascaldom or concocted religion. One simply has to surrender to God. That is religion. We have developed this human form of life after passing through many millions of lower grades of life, and now we have to develop this Krishna consciousness, love of God. Take this Krishna consciousness movement very seriously—we have volumes of books to convince you of your relationship with God, and what is your duty, what is your ultimate goal of life—these things are all very nicely explained in the Bhagavad Gita. But, unfortunately, so-called scholars and so-called wise men misinterpret the whole thing. That is why the Lord appeared as Lord Chaitanya 500 years ago, to establish the correct principles of Bhagavad Gita. He showed that even if you do not understand the process of religion, then simply chant Hare Krishna, Hare Krishna, Krishna Krishna, Hare Hare/ Hare Rama, Hare Rama, Rama Rama, Hare Hare. The results are practical. For example, when we were chanting Hare Krishna, all the members who were assembled here were joining in, but now when I am talking about philosophy, some are leaving. It is very practical, you can see. The Hare Krishna Mantra is so enchanting that anyone can take part in any condition and if he continues to chant, gradually he will develop his dormant love of God. His heart will be cleansed of all dirty things and gradually he will be freed from the material concept of life, and he will be joyful. He will see everyone as sons of God, and then he will begin his loving transcendental service to Krishna. Our only request is that you try to understand this Krishna consciousness movement. It is very simple. We are requesting everyone to chant the Hare Krishna Mantra and take Prasadam. When you are tired of chanting, the Prasadam is ready. You can immediately take Prasadam. And if you dance, then all bodily exercise is Krishnized; and all of the attempts of the yoga processes are attained by this simple process. So chant, dance, take Prasadam—even if you do not at first hear this philosophy, it will act, and you will be elevated to the highest platform of perfection. Thank you very much. 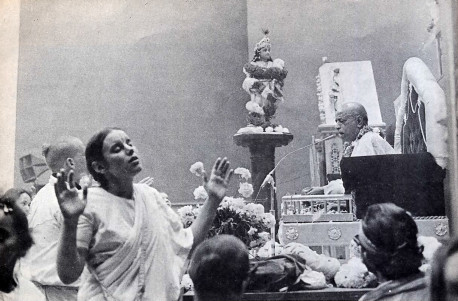