Back to Godhead > Festivals > Lord Jagannatha’s Journey to the Sea

Lord Jagannatha’s Journey to the Sea 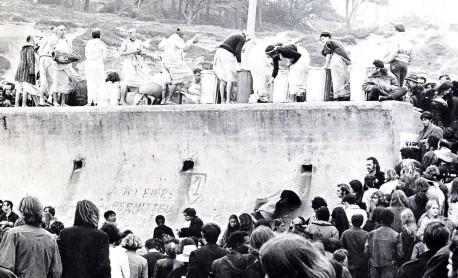 There was great excitement in the San Francisco temple. A.C. Bhaktivedanta Swami, affectionately known as Prabhupada, had given a lecture the night before, and the chants had been sung with much enthusiasm. Now today was the Jagannath Car Festival. Through the mercy of the spiritual master the disciples are able to enjoy transcendental bliss, and therefore the temple was very much elated.

Food was being prepared in large, shining-new barrels, as there were no pots large enough to hold all the prasadam. Prasadam means spiritual food because it has been offered to God. The scriptures state that food which has been offered to Krishna takes on all His power. So we were prepared to distribute Krishna to thousands.

The women’s quarters were filled with carnations and gardenias, to be for garlanding the large car. And a special garland would be made to be placed around the neck of our spiritual master.

Everyone was busily working to make sure that everything was perfect. All the last minute details were checked. This year our ingenious Godbrother Nara-Narayan Das had installed a movable top which could be raised and lowered; the previous year there had been trouble with the top of the cart hitting telephone wires.

Lord “Jagannath” means He is the Lord of the universe. Along with His Brother and Sister, Jagannath was placed on top of the car where a devotee undertook the auspicious assignment of fanning Them with a peacock feather fan.

On the car’s topmost level, devotees passed along a walkway adding final decorations.

Below the Jagannath Deities was a magnificent throne for His Divine Grace A.C. Bhaktivedanta Swami. Someone might ask, “Why is there a throne for the spiritual master? Does he think that he is God?” The answer is definitely “No.” The spiritual master is honored and worshiped with all the honor due to the Supreme Lord only because he is a bona fide representative of the Lord. His Divine Grace never states that he is Lord Krishna. He has always made plain to his devotees that he is a servant of Lord Krishna. This is one of the symptoms of a pure devotee. The throne that His Divine Grace sat upon was a deep velvety red and as the day was relatively clear it could be seen for quite a distance.

Directly behind the throne of His Divine Grace there was a large section for the musicians. Included in the ensemble were harmoniums, kartals (hand cymbals), mridangas (sweet drums) and singers of the Hare Krishna Mantra. To enhance the music of these performers there were microphones and amplifiers, and the chanting could be heard very clearly and for a considerable distance.

The large steel barrels of food, dozens of watermelons, thousands of “simply wonderfuls” (the name given to a favorite recipe of the devotees by His Divine Grace), as well as other assortments of fine Indian vegetarian foods cooked in savory butter, were already moved to their destination. Everything done in Krishna consciousness is acted through the sanction of higher authorities as revealed in the scriptures. The prasadam was cooked directly from recipes found in Vedic scriptures, and the effort and care taken by the devotee-cooks was primarily for pleasing the transcendental Senses of the Supreme Lord Krishna. All of this food was taken to the Family Dog Auditorium, the site of the feast. Rathayatra Festival is also called the march to the sea. The festival-march was to start at Haight and Ashbury streets and to end at the seaside auditorium.

Right on schedule the cart began moving at Haight and Ashbury Streets. Meanwhile the prasadam, which had already been taken by truck to the ocean auditorium, was being arranged for mass-serving. Inside the auditorium devotees were sweeping the floor and decorating the stage with flowers. A place onstage was reserved for the throne of His Divine Grace. The auditorium was brilliant with red and white flowers, all carefully placed.

The Radha Krishna temple was empty and silent save for a few people. Outside the temple, the Jagannath Car had been moved to the designated place to wait for union with His Divine Grace. Everyone was waiting for Srila Prabhupada to arrive, and the assembled devotees could feel the auspiciousness of this event.

His Divine Grace was driven by auto to Haight and Ashbury Streets, and a giant hush fell over the crowd as his car pulled up beside the Jagannath Cart. The devotees immediately bowed on sight of him and paid their obeisances to the eternal guru. Prabhupada was helped up to the altar. He took his seat and sat with a majestic stature. Prabhupada always has this majestic presence, projecting his confidence in his movement and his confidence that Sri Krishna will help him spread Krishna consciousness.

The streets were filled to capacity and at first the predominant sound was the wind. San Francisco is very windy and that was the prevailing sound whistling through the hills; but then His Divine Grace’s voice was heard. He spoke in calm yet commanding tones. His words are always precise and clear every time he speaks. He speaks like a surgeon, cutting away all unnecessary words and speaking only of the Supreme Absolute Truth, Sri Krishna. Prabhupada never speaks nonsense.

After a short lecture, the march to the sea began. People were dancing and singing the Hare Krishna Mantra all the way to the sea. The entire atmosphere was one of happiness and bliss, and His Divine Grace exhibited his most wondrous smile. Working together as a team, the devotees pulled the car slowly and smoothly over the route. The leader of the car expertly guided it through the streets, spreading the glories of Krishna by singing His Holy Name. At certain points along the route devotees were seen dancing in flower patches, and flowers were continually distributed. As with the foodstuffs, the flowers were offered to Krishna, and thus they were spiritualized, prasadam. They had all the power of Krishna. Anyone who took a flower would have his door to liberation opened wide, even without his knowing it. According to the Vedic authorities, the chanting of Hare Krishna is the special Mercy given by Lord Krishna to the people of this Age of Kali. People are not capable in this age of going to the woods and meditating for a hundred or a thousand years or following the rules and austerities of the bona fide Yoga system. Krishna has said that by chanting the Holy Name, Hare Krishna,—or just by taking prasadam—you can very soon become self-realized. On the day described, thousands took part in the special dispensation of the Holy Name and thousands accepted prasadam of foodstuffs and flowers.

The car joyously reached the auditorium, and His Divine Grace gave another lecture. During his talk he sang a special chant which he does not usually sing. Then the auditorium was filled with the transcendental sound vibration of Hare Krishna. Any person of any sensitivity could surely feel the vast amount of energy and happiness that was radiated by the chanting of the Holy Names of the Lord.

As the chanting gradually subsided, the prasadam was served by the devotees. While the foodstuffs were being distributed a lovely girl devotee was singing a prayer to the spiritual master:

“I offer my respectful obeisances to His Divine Grace A.C. Bhaktivedanta Swami who is very dear to Krishna on this earth due to his taking shelter of the transcendental Lord.” This young girl’s voice was dominant over the murmer of the crowd, and one could feel her overwhelming affection for her spiritual master. Another devotee sat with Srila Prabhupada’s shoes in his hands until Prabhupada was ready to leave.

One may ask, “Why are these people being so humble and subservient to their spiritual master?” Some examples may be cited: If a servant of a king does his duties and sweeps the palace and is always there when the king calls for him, then the king will give him nice foodstuffs, nice shelter, and thus the servant is enjoying; only by satisfying the king can the servant be happy. Or, if a man is working in an office and he reports to work on time, never makes any mistakes on the forms, is willing to do anything for his boss, then he gets monetary gain and respect and prestige in his company. Similarly, if the spiritual master is satisfied, he will bestow his mercy upon you and you will advance spiritually. It is stated throughout the Vedic scriptures that there is no spiritual advancement without the mercy of the spiritual master.

This Car Festival is only one of the many festivals that are held throughout the year in different cities. Each Sunday at 4:00 in Los Angeles there is a love feast comprised of 15 courses of vegetarian foodstuffs prepared directly from the holy scriptures.

Krishna consciousness is more than a religion. It is the postgraduate of all religions. All religions are trying to become aware and conscious of God. All religions are trying to become Krishna conscious. The devotees of all the Krishna consciousness temples humbly request that if anyone has any questions, no matter how mundane, please go to one of the temples and inquire about this transcendental science. Please also look forward to the festivals that will also be taking place in the future. If you can do none of these we humbly request you simply chant Hare Krishna and your life will be sublime. Hare Krishna.