Back to Godhead > Devotees > Chanting > Pure Love Through Transcendental Sound 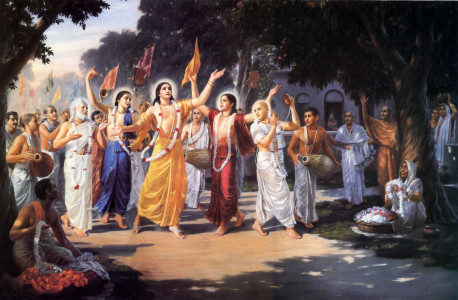 Hearts filled with love for Krsna, Lord Sri Caitanya Mahaprabhu and His followers spread the chanting of the Hare Krsna mantra through the towns and villages of West Bengal, India, some five hundred years ago. A chant that’s formed of holy names of God, the mantra invokes the presence of God Himself through transcendental sound. According to Vedic scriptures, Lord Krsna Himself came to this world as Lord Caitanya to teach this chanting as the sublime way to revive our dormant love for God. And now, people all over the world are chanting Hare Krsna.

We should never underestimate the power of words. A few properly chosen words, spoken or sung, can change history. La Marseillaise inflamed mobs during the French Revolution. Lincoln’s “Gettysburg Address” inspired the Yankees to continue giving “the last full measure of devotion.” The Horst Wessel Song fueled the dictatorship of Nazi Germany. We Shall Overcome unified the civil rights movement. And the songs of Bob Dylan and the Beatles helped create an entire counterculture.

But all these words, powerful as they were, couldn’t solve the real problems of existence—repeated birth, old age, disease, and death. Time passed, the impact of these songs and pronouncements faded, people forgot. And the inexorable problems of life in the material world continued unabated.

To solve these problems we need to hear and vibrate words that are supra-mundane, words that can inspire us at the deepest spiritual level. Such words do exist, and they are described in ancient India’s Vedic literature as sabda-brahman, “the Absolute Truth in the form of words, or sound.”

For thousands of years the sacred texts of the Vedas have taught that one can extricate himself from the bonds of material life by hearing and chanting transcendental sounds. The common, unenlightened person is in a sleeplike state, oblivious of his real nature as a spiritual being and of his relationship to the Supreme Being. The Vedas say, “Wake up! Having attained the human form of life, achieve self-realization and break out of the bonds of repeated birth and death.”

According to the Vedic literatures, sabda-brahman can awaken us from our materialistic slumber. But this spiritual sound must be received from those adept at the process of bhakti-yoga, devotional service to the Supreme Lord. In other words, these sounds may be given to the common man, asleep to spiritual life, by one who is awake and fully cognizant of his spiritual nature. Such an initiator into the truths of spiritual sound is called a guru, or spiritual master.

The Vedic literature asserts that the nonpareil of all spiritual sounds is the Hare Krsna maha-mantra, the Great Chant for Deliverance—Hare Krsna, Hare Krsna, Krsna Krsna, Hare Hare/ Hare Rama, Hare Rama, Rama Rama, Hare Hare. Chanting these sixteen words is the best way to awaken to our spiritual life. The word Krsna is a name of God meaning “the all-attractive one,” Rama means “the all-pleasing one,” and Hare is an invocation to Hara, Krsna’s internal spiritual energy. Thus the Hare Krsna mantra is a prayer to the Lord and His energy for the privilege of engaging in His service. If we regularly hear and chant this sound vibration, we will become pure, enlightened, and awake to our eternal life of bliss and knowledge in the service of the Lord.

Although anyone can start chanting Hare Krsna at any time and make definite spiritual progress, there is an art and science to chanting. Lord Caitanya Mahaprabhu, Krsna Himself in the role of His own devotee, appeared in Bengal, India, five hundred years ago to teach that art and science. Lord Caitanya based His teachings on authoritative Vedic texts like Bhagavad-gita and Srimad-Bhagavatam. He taught that the name of the Lord is His sound incarnation and that since the Lord is absolute there is no difference between His name and Him personally. Thus, by chanting the holy name of God, we can directly associate with Krsna through sound.

As we become adept at chanting and hearing the Hare Krsna mantra, we pass through three stages: the offensive stage, the clearing stage, and the perfected stage. In the offensive stage we still desire various kinds of sense pleasure, but we are struggling to become pure. In the second stage we clear off all material contamination and begin to taste the real nectar of the name. And in the perfected stage we attain the most coveted goal—pure love of God. Lord Caitanya taught that love of God is the highest goal of all living beings, the very essence of authentic spirituality. The mission of the Hare Krsna movement is to follow, realize, and propagate the teachings of Lord Caitanya.

The information in the Vedic literature about sound vibration and man’s relationship with God is extremely confidential. Nonetheless, by the mercy of His Divine Grace A.C. Bhaktivedanta Swami Prabhupada, who first propagated the Hare Krsna mantra outside India, everyone can now enter into the mysteries of these divine truths simply by chanting the transcendental names of God—Hare Krsna, Hare Krsna, Krsna Krsna, Hare Hare/ Hare Rama, Hare Rama, Rama Rama, Hare Hare. These are truly the words that are changing history.