Back to Godhead > Devotees > Preaching > Art > Now His Art Has Meaning

Now His Art Has Meaning

Now His Art Has Meaning

A gifted artist gives up a career on Madison Avenue for a simple life of spiritual dedication. 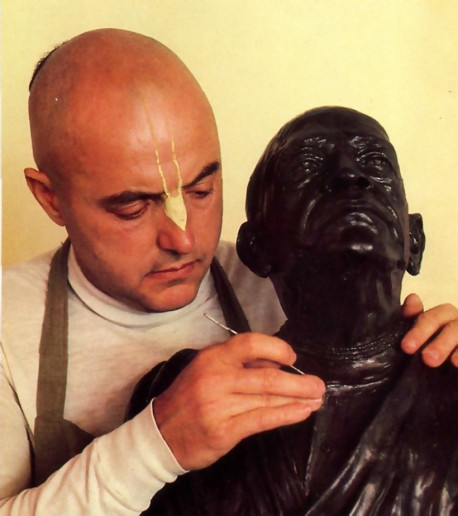 In the spring of 1969, the Today Show ran a special on the paintings of Alfred Valerio, a Madison Avenue ad designer on his way to the top of the commercial art world. While most of his contemporaries starved in their studios, Alfred was selling his paintings for $1,000 each and taking contracts for everything from corporate logos to city hall murals.

Thirteen years later, Alfred (now Bhaktisiddhanta dasa) has no time for what he considers the meaningless art of the commercialized West. From his headquarters in Mayapur, West Bengal, Bhaktisiddhanta oversees teams of sculptors, painters, and craftsmen as they erect a 160-foot-high memorial to His Divine Grace A.C. Bhaktivedanta Swami Prabhupada, the founder and spiritual guide of the Hare Krsna movement. 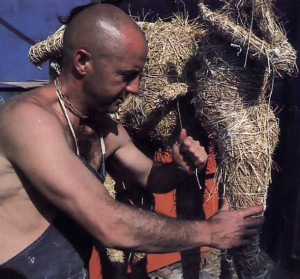 A figure takes shape under the skillful hands of Bhaktisiddhanta dasa, working here in Los Angeles in 1976. To create the figure, he uses the traditional Indian method of puttala, constructing a base of straw upon which he will mold the final form in clay.

Of course, back in 1969 Alfred couldn’t have dreamed he’d soon be chanting Hare Krsna, living a simple life in an Indian village, and helping to build a masterpiece of classical Vedic architecture. His background was solidly in Western art. Trained by a host of commercial art and fine art professionals at the Los Angeles College of Art and Design, Alfred became the friend and protege of Thomas Buechner, the director of the Brooklyn Museum. On a John F. and Analee Stacy fellowship for classical painting, he studied two years in Italy and produced more than seven hundred paintings.

To satisfy his interest in the philosophical side of life, he turned to Western religious sources. An Italian Catholic, he naturally looked to the Bible for spiritual direction as well as pictorial themes for his art. While in Florence, he painted murals for churches and seriously considered letting his beard grow, donning a long flowing robe, and joining the order of Capuchin monks. But he gave up that idea and returned to the States to begin his career. 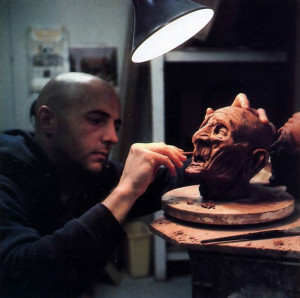 He models one of the heads for the final diorama, part of the First American Transcendental Exhibition at the Los Angeles Hare Krsna center.

“I was frustrated as an artist,” reflects Bhaktisiddhanta, “because I wanted to amalgamate truth and beauty. But the truths of life around us—birth, old age, disease, and death—are far from beautiful. And the beauty we do see is so temporary and insubstantial that it doesn’t represent any lasting truth.” Unable to find a satisfying solution to his dilemma, Bhaktisiddhanta had to content himself with producing ads for Jeeps, Tide, Ivory Soap, and Duncan Hines cakes.

Then Bhaktisiddhanta and his wife, now known as Vidya-devi dasi, paid their first visit to a Hare Krsna temple, in Miami. “I was astounded,” he remembers. “I was introduced to Lord Krsna, who is simultaneously the Absolute Truth and the embodiment of Absolute Beauty. I knew immediately that Krsna consciousness was what I’d been looking for.”

Joining the Hare Krsna movement didn’t slow down Bhaktisiddhanta’s art production in the least. In fact, it gave his artistic life new depth and direction. Now at last he had a worthy subject for the painting, sculpture, and architecture he’d mastered.

Bhaktisiddhanta reflects on the first lecture he attended at the Hare Krsna center in Miami: “The speaker described how Maha-Visnu, an expansion of Lord Krsna, creates the cosmos by exhaling universes as He lies in the Causal Ocean. I anticipated with great excitement being able to illustrate the actual creation in full detail.” 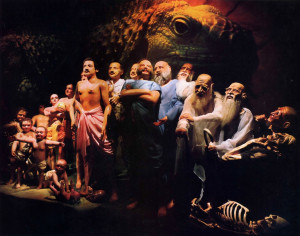 Even more exciting for Bhaktisiddhanta was discovering the personalistic theology taught in the Bhagavad-gita and Srimad-Bhagavatam, two basic books of Vedic knowledge. This theology encompassed the life and activities of a personal God, not an abstract, impersonal energy. Bhaktisiddhanta learned that God has form and personality along with an enchanting kingdom full of His friends and relatives and a variety of flowers, trees, birds, and animals. Moreover, Krsna consciousness was exemplified by a self-realized master of the art of serving God—Srila Prabhupada.

“To become a professional artist you must find an art master and study under him,” explains Bhaktisiddhanta. “So the idea of accepting a guru wasn’t new to me. I’d had many art ‘gurus’ who’d helped me shape my art style and professional techniques. But my spiritual master, Srila Prabhupada, was able to improve my art in a more profound way, by giving it a spiritual foundation.”

Now Bhaktisiddhanta is offering that spiritual art back to Srila Prabhupada. His expertise in sculpture and painting is helping to produce a unique architectural masterpiece—Srila Prabhupada’s puspa-samadhi, or memorial tomb, in Mayapur. He described some of its features: “Around the dome of the samadhi will stand sixteen twelve-foot-high statues depicting devotional practices taught by Srila Prabhupada, such as worship of the Deity in the temple, protection of cows, Vedic education, and distribution of literature about Krsna. Nine eight-foot-high statues will show various ways to serve Krsna—hearing His instructions, chanting about Him, remembering Him, and so on. In addition, sixteen hundred feet of bas-relief panels will portray devotees chanting Hare Krsna in chorus while hundreds of demigods shower flowers and benedictions upon them and Srila Prabhupada.” 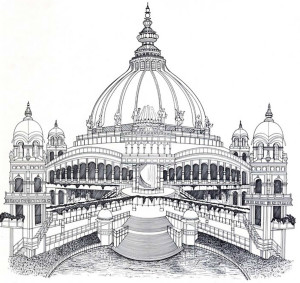 Working as an assistant to His Holiness Surabhir-abhipalayantam Goswami, the chief architect for the Mayapur project, Bhaktisiddhanta has designed all the figures that embellish the samadhi. He gives his drawings to sculptors, who carve the pieces and later cast them in cement or bronze under his direction. Bhaktisiddhanta is also preparing a larger-than-life-size statue of Srila Prabhupada, which will sit in an ornate inner chamber four stories high. In addition, he plans more than a dozen three-quarter-size plaster dioramas that will encircle the eighty-foot-wide building and portray the philosophy of Krsna consciousness and the pastimes of Lord Krsna.

Simultaneously, Bhaktisiddhanta is helping to construct a traditional samadhi in Vrndavana, the town ninety miles south of Delhi where Krsna enacted His childhood pastimes. This samadhi, which marks the actual resting place of Srila Prabhupada’s body, will be finished in luminous white marble. It will house a museum of dioramas portraying Srila Prabhupada’s life. 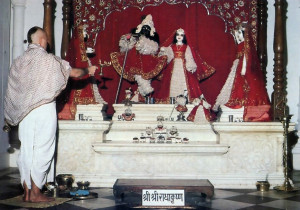 Worshiping the Deities of Radha and Krsna every morning in the Hare Krsna temple in Vrndavana inspires Bhaktisiddhama for his creative work.

Bhaktisiddhanta’s work will by no means end with the completion of the samadhis in Mayapur and Vrndavana. At that point he will simply turn his attention toward the greater task of spreading Krsna consciousness all over the world through art.

“Architecture coupled with painting, sculpture, and dioramas is a potent way to spread Krsna consciousness,” says Bhaktisiddhanta. All major religions have glorified God by erecting magnificent buildings—temples, mosques, churches, cathedrals, synagogues. We want to affirm the permanence of Vedic culture through splendid architecture, and we also want to introduce the West to Krsna, the pinnacle of artistic expression. 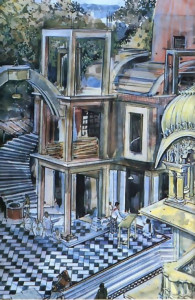 “Just as the philosophy of Krsna consciousness is gradually bringing about a spiritual revolution in the field of Western philosophy, I believe the art of the Hare Krsna movement will cause a similar revolution in the art world. The philosophy is personal and the art is personal—nothing abstract about it. Abstract art typifies social alienation. But people don’t want to be alienated: they want meaningful personal relationships. Through our sculptures, paintings, and dioramas, people can learn the philosophy of Krsna consciousness and begin to reestablish their eternal relationship with the Supreme Person, Krsna.”

Many Hare Krsna leaders agree with Bhaktisiddhanta that art and spreading Krsna consciousness go hand in hand. For example, the heads of the Hare Krsna centers in Baroda and Bhubaneswar have requested dioramas for teaching Krsna consciousness. Bhaktisiddhanta will design and direct the production of dioramas from the Srimad-Bhagavatam as well as the Mahabharata and Ramayana, two classical Vedic histories. And his team in Mayapur will cast lightweight figures in bronze and aluminum for shipment to the West. 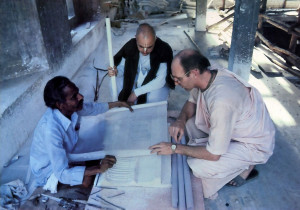 He consults with His Holiness Surabhirabhipalayantam Swami and a local craftsman at the Vrndavana construction site.

For Bhaktisiddhanta, life in the Hare Krsna art world is far more exciting and productive than life on Madison Avenue. “By the ingenuity of my spiritual master, I have found a satisfying way to put all those years of training and experience to use. My love for my work grows as I find newer and more potent means of achieving and teaching spiritual knowledge through art.”

2 Responses to Now His Art Has Meaning