Back to Godhead > ISKCON > News > Govinda’s Restaurant Opens in Tirupati 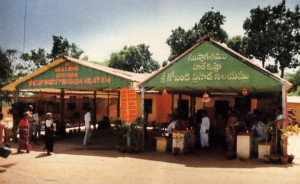 In Tirupati, along the seven-mile-long mountain path to the temple of Lord Venkatesvara (a form of Lord Krsna), pilgrims stop for rest and refreshment at the newly opened Govinda’s Restaurant.

Tirupati, Andhra Pradesh, India—Every week more than 200,000 pilgrims walk up the steep seven-mile footpath here to pay homage to Lord Venkatesvara (a Deity form of Visnu, or Krsna) in His magnificent Tirumala temple. For years, many of them stopped off for refreshment at the temple-run snack bar along the way. Now that snack bar has become Govinda’s, a restaurant run by Hare Krsna devotees that serves only krsna-prasadam, vegetarian food offered to Lord Venkatesvara.

Sri G. Kumaraswamy Reddy, executive officer of the Tirumala temple, was responsible for the establishment of Govinda’s here. It was his warm appreciation for the work of the Hare Krsna devotees in Tirupati, headed by Srila Bhaktisvarupa Damodara Swami, that inspired him to donate the restaurant to the movement. He has also given the devotees a large piece of land and $20,000 to build a temple-and-asrama complex. That, along with the restaurant and the ongoing educational efforts of the devotees (see BACK TO GODHEAD, Vol. 17, No. 11), promises to make this popular place of pilgrimage even more spiritually attractive.

New Orleans—For twenty-eight years now the Ozanam Inn, a branch of the worldwide Saint Vincent de Paul Society, has ministered to the homeless people of this city. The largest free organization of its kind in New Orleans, the Inn houses one hundred men a night and serves 24,000 free meals a month. Lately, a significant number of those meals have been prasadam, food offered to Lord Krsna, which has provided spiritual as well as physical sustenance. What follows is a letter of appreciation from Brother Phillip Street, director of the Inn, to Vrkodara dasa, president of the New Orleans Hare Krsna center, which regularly donates the prasadam.

“Prayerful greetings to you. I just wanted to write a personal note of heartfelt thanks to you on behalf of not only we brothers but also the men, women, and children who come here to Ozanam Inn seeking help, for your continued donations of prepared food. This will help immensely in our efforts to care for our destitute brethern.

“As you no doubt know, we rely on the Providence of God and the generosity of men and women such as yourself to supply the needs for our work. . . . Thank you once again for your help, and may our dear lord bless you and all those who are dear to you.”

New York—Grove Press has announced the publication of Hare Krishna, Hare Krishna: Five Distinguished Scholars on the Krishna Movement in the West, edited by Steven J. Gelberg, a senior editor of the Bhaktivedanta Book Trust. The book consists of five lively, revealing, and highly instructive dialogues between the editor (a Hare Krsna devotee known within the movement as Subhananda dasa) and five noted scholars of religion: Harvey Cox, the well-known Harvard theologian; A. L. Basham, the eminent Indologist; and Thomas J. Hopkins, Larry D. Shinn, and Shrivatsa Goswami, three specialists in devotional Hinduism. Together, these dialogues shed much light on relevant historical, sociological, psychological, and theological issues surrounding the movement.

“My main reason for doing this book,” explains Subhananda, “was simply to provide the public with an opportunity to look beyond the popular distortions and myths about the Hare Krsna movement and to get an in-depth view of the movement through the eyes of some unbiased and highly perceptive and articulate scholars.”

Prepublication reviews highly praise the work. Diana Eck of Harvard writes, “This is a substantial and welcome contribution to our understanding of one of the most vibrant devotional traditions in India and its meaning and significance in the contemporary West. . . . A sensible and open discussion of many of the questions one has always wanted to ask about the Hare Krsna movement and of the issues it has raised for the religious life of the West. . . . A rich source of information for scholars, students, and lay readers.” Ninian Smart, one of the world’s most respected scholars of comparative religion, writes, “This book will help us to understand the logic and appeal of the Krsna movement and its roots in Indian spirituality. Its approach is both learned and human, for it engages a number of knowledgeable people—including eminent scholars both of Hinduism and Christianity—in dialogue. The results are illuminating.”

Hare Krishna, Hare Krishna will be available from Hare Krsna centers and from regular commercial bookstores. 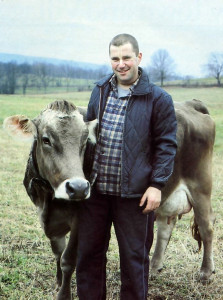 Paramananda dasa. leader of the Gita-nagari farm, with one of the prize-winning Brown Swiss.

Port Royal, Pennsylvania—The Pennsylvania Dairymen’s Association has commended the Hare Krsna devotees at the Gita-nagari farm community here for having the best herd of Brown Swiss cows in the state. At the dairymen’s annual banquet near Harrisburg, Dave Roth, president of the association, and Penrose Hollowell, Pennsylvania’s secretary of agriculture, praised the Gita-nagari community for its contribution to the state’s dairy industry, the fifth largest in the United States.

Gita-nagari’s display table at the banquet attracted scores of dairymen. They stopped by to admire the photos of cows and oxen, sample the all-milk confections offered to Lord Krsna, and find out from Paramananda dasa, the leader of the Gita-nagari community, why the cows at the farm give so much milk (each one an average of 15,953 pounds of milk with 664 pounds of butterfat for the 1981-82 testing year).

“In the Bhagavad-gita,” Paramananda explained, “Lord Krsna says that the main duty of farmers is to protect the cows. This means treating them like we would our mother—with affection and respect. Our cows know they won’t be sent off to the slaughterhouse when their milk bags run dry, so they’re happy. And happy cows give the most, and richest, milk.” 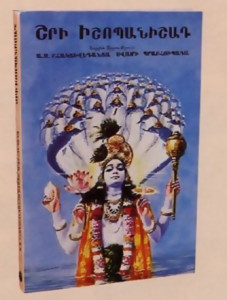 Paris—The eight million Armenians living in various countries throughout the world now have a chance to read a book on Krsna consciousness in their mother tongue. The book is Srila Prabhupada’s translation, with commentary, of Sri Isopanisad, a work from the Vedas that helps establish the personalistic conception of the Supreme.

Hari-vilasa dasa, president of Spiritual Sky Scented Products, Inc., in Europe, funded the publication, and Keram Chahiniaan, an Armenian friend of the Hare Krsna movement, translated it. Future Armenian publications will include The Science of Self-Realization (a compendium of Srila Prabhupada’s articles from BACK TO GODHEAD magazine) and his Easy Journey to Other Planets.

Elsewhere overseas, the German branch of the Bhaktivedanta Book Trust has just completed publishing the German editions of all of Srila Prabhupada’s books—some seventy volumes in the original English. Working under the guidance of Srila Harikesa Swami, who oversees the affairs of the movement in northern Europe, several devotees contributed to the translation effort over more than a decade.

In other publishing news, the Los Angeles branch of the Bhaktivedanta Book Trust has released the fourth volume of Srila Prabhupada-lilamrta, the seven-volume biography of Srila Prabhupada by Srila Satsvarupa dasa Goswami; the second and third volumes of the Eleventh Canto of the Srimad-Bhagavatam, a joint effort of translation and commentary by Srila Hridayananda dasa Goswami and Gopi-paranadhana dasa; and Chant and Be Happy, a paperback book on the Hare Krsna mantra based on the teachings of Srila Prabhupada and featuring an interview with former Beatle George Harrison.