Back to Godhead > Krishna > Krishna – The Personal Form Of God

Krishna – The Personal Form Of God 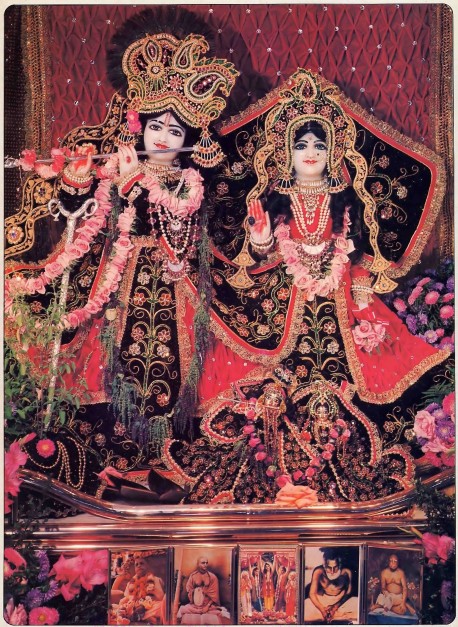 “The Supreme Lord walks and does not walk.
He is far away, but He is very near as well
He is within everything, and yet
He is outside of everything.” 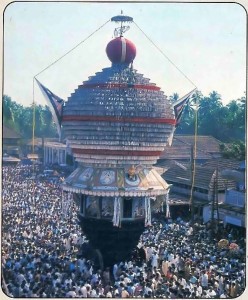 “The Supreme Lord walks…. ” Thousands go on a procession with the Krishna Deity during this festival in India (above). People in India have known for ages that God is a person – and that as themaster of all energies, He can manifest Himself as He likes, even through Deity forms supposedly made of earth, stone, or wood. “He is far away, but He is very near as well…. “Though He never leaves His spiritual abode, Lord Krishna also appears in such places as Los Angeles (above). (His queen: Srimati Rukmini-devi.) For the surrendered soul Krishna is always within reach.

This mantra is from the Isopanisad, the oldest of the famed Upanisads, which are the philosophic heart of the sacred scriptures of India. The mantra presents contradictions—by way of proving the inconceivable potencies of God. In India, as well as throughout the world, those who admit God’s existence have always disputed whether God is impersonal or personal. The Mayavada school accepts only an impersonal aspect of the Lord and rejects His personal feature. The Bhagavata school (devoted to Sri Krishna, the Supreme Personality of Godhead, and represented today by the Krishna consciousness movement) accepts the Lord as both impersonal and personal.

We should not take it for granted that just because we cannot see God with our eyes, the Lord does not have a personal existence. The Isopanisad mantra refutes this argument by warning us that the Lord is “far away but very near as well.” The abode of the Supreme Lord is far, far beyond the material sky, and its distance cannot even be measured. But despite the Lord’s being so far away, He can at once, within less than a second, descend before us with a speed swifter than the mind or wind.

And there is no power to prevent the primeval Supreme Being from coming before us in the material world in His supreme personal form. For example, the Lord can appear in the form of Deities supposedly made of earth, stone, or wood. Although engraved from wood, stone, or other matter, these forms are not idols (as the iconoclasts contend). In our present state of imperfect material existence, we cannot see the Supreme Lord because of our imperfect senses. Yet those devotees who want to see Him by means of material vision are favored by the Lord, who appears in a so-called material form to accept His devotees’ service. One should not think that such devotees are worshiping an idol. They are factually worshiping the Lord, who has agreed to appear before them in an approachable way. Nor is the Deity form fashioned to the whims of the worshiper. (This is the actual meaning of the Biblical injunction, “Thou shalt not worship a graven image”—one is forbidden to imagine a form and worship it as God.) The Deity form is authorized by scripture and exists eternally with all His paraphernalia. This can be actually felt by a sincere devotee, but not by an atheist. For the surrendered soul the Lord is always within reach, whereas for the unsurrendered soul He is far, far away and cannot be approached.