Back to Godhead > Devotees > Chanting > Chanting Hare Krishna in Amsterdam 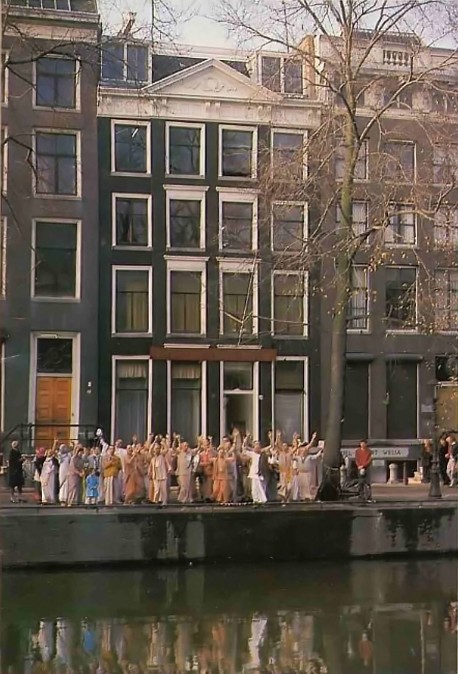 Devotees standing before the Amsterdam center of the International Society for Krishna Consciousness.

The International Society for Krishna Consciousness (ISKCON) is a worldwide community of devotees practicing bhakti-yoga, the eternal science of loving service to God. The Society was founded in 1966 by His Divine Grace A. C. Bhaktivedanta Swami Prabhupada, a pure devotee of God representing an unbroken chain of spiritual masters originating with Lord Krishna Himself. The following eight principles are the basis of the Krishna consciousness movement. We invite all of our readers to consider them with an open mind and then visit one of the ISKCON center to see how they are being applied inevery day life.

Many people in our materialistic world are feeling a void in their lives—a lack of something that they can’t quite put their finger on. To fill this void, many are taking up “consciousness-raising” or “meditational” techniques. Several individuals and groups have marketed various techniques to a largely innocent public, with some mention that most of their methods are “inspired by” or “adopted from” the spiritual disciplines of India. What these entrepreneurs have really done is to water down and exploit genuine spirituality.

However, one spiritual teacher has consistently refused to compromise. And from Harvard to Oxford to the Sorbonne, the world’s leading scholars agree: His Divine Grace A.C. Bhaktivedanta Swami Prabhupada is delivering India’s sacred devotional culture as it is.

The key to understanding this culture and elevating ourselves to clear consciousness—Krishna consciousness—is the simple, easy, yet sublime process of chanting the Hare Krishna maha-mantra. Maha means “great,” man means “mind,” and tra means “release.” Maha-mantra, then, means “the great chanting for releasing the mind from illusion.” The maha-mantra consists of three names for God: Hare (God’s pleasure energy), Krishna (God, the all-attractive Supreme Personality), and Rama (God, the reservoir of all pleasure). Srila Prabhupada explains that simply by chanting and hearing these sounds, “one can achieve all the benefits of spiritual life.”

India’s most respected spiritual books and teachers all bear out Srila Prabhupada’s statement. For instance, six centuries ago Sridhara Swami said, “If one always chants the holy name of the Lord with great devotion in the morning and evening, one can become free from all material miseries.”

If the process is so easy, can we learn it from anyone? The Padma Purana explains, “Unless one receives his mantra from a bona fide spiritual master in the authorized disciplic succession, his mantra will be without any effect.” Srila Prabhupada, the foremost teacher in the Brahma-Madhva-Gaudiya disciplic succession, freely offers the Hare Krishna maha-mantra to fill whatever void may exist in our lives.