Back to Godhead > ISKCON > News > Every Town and Village: Deprogramming smashed in courts

Every Town and Village: Deprogramming smashed in courts 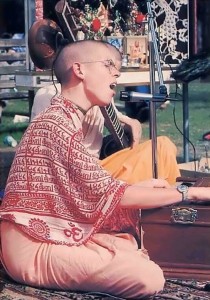 The Krishna consciousness movement has defeated a highly publicized challenge to the authority and value of its spiritual teachings. On March 17, New York State Supreme Court Justice John J. Leahy threw out indictments charging two leaders of the Society’s New York chapter with attempted extortion and illegal imprisonment of members through “brainwashing.”

Last October, Queens District Attorney Michael Schwed had raised many eyebrows—and spurred scholars, lawyers, Hindus, devotees, and many others to protest—when he jailed Trai dasa and Adi-Kesava Swami on the “brainwashing” and extortion charges. At that time Schwed had spoken of the Krishna consciousness movement as a “frightening group that uses mind control to create an army of zombies, or robots, who could undermine the government and law enforcement.”

But the District Attorney fled the courtroom in embarrassment on March 17 when Justice Leahy handed down his decision. “The entire and basic issue before this court,” said the judge, “is whether or not the two alleged victims in this case [Merylee Kreshower and Edward Shapiro] and the defendants will be allowed to practice the religion of their choice—and this must be answered with a resounding affirmative.

“The Hare Krishna religion is a bona fide religion, with roots in India that go back thousands of years. It behooved Merylee Kreshower and Edward Shapiro to follow the tenets of that faith, and their inalienable right to do so will not be trammeled upon… The presentment and indictment by the grand jury was in direct and blatant violation of the defendants’ constitutional rights.

“It appears to the court that the people rest their case on an erroneous minor premise to arrive at a fallacious conclusion. The record is completely devoid of one specific allegation of a misrepresentation or an act of deception on the part of any defendant.”

Justice Leahy stressed that his decision was a “dire caveat to prosecutional agencies throughout the length and breadth of the land.” Citing the constitutional guarantee of freedom of religion, he said:

“The freedom to practice a religion is not to be abridged because the religion is unconventional in its beliefs and practices or because it is approved or disapproved by the mainstream of society or more conventional religions. Without this proliferation and freedom to follow the dictates of one’s own conscience in one’s search for and approach to God, the freedom of religion will be a meaningless right as provided for in the Constitution.

“Any attempt, be it circuitous, direct, well-intentioned or not, presents a clear and present danger to this most fundamental, basic and eternally needed right of all American citizens—freedom of religion.”

His Divine Grace A.C. Bhaktivedanta Swami Prabhupada has commented in this connection that “by false propaganda you cannot suppress the truth.” Certainly those interested in God consciousness may have to tolerate criticism, or even persecution, for that is the way of history. But we are sure that in due course of time all sincere, intelligent persons will appreciate Srila Prabhupada’s great benediction to humanity: devotional service to the Lord, Sri Krishna.

An increasing number of academicians are taking strong objection to the accusation of a few self-proclaimed “deprogrammers” that the Hare Krishna movement is a type of “brainwashing cult.” Protesting the charge that Krishna consciousness robs an individual of his freedom of thought, dozens of members of the New England Psychological Association recently signed a petition decrying “the use of colloquial terms [like ‘brainwashing’ or ‘mind control’] as legal weapons against a legitimate religious minority.” And in St. Louis, at a joint convention of the American Academy of Religion, the Society of Biblical Literature, and the American School of Oriental Literature, over two hundred scholars declared the Hare Krishna movement to be a bona fide spiritual organization in the Indian tradition. Indeed, scholars all over the world have expressed their deep appreciation of ISKCON’s work, particularly the publication of many volumes of classic Vedic texts in English, French, German, Spanish, and other languages. 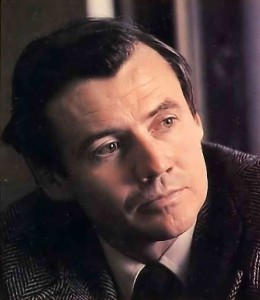 Dr. Joseph O’Connell, religion professor at the University of Toronto, listens to arguments on the subject of “deprogramming.”

“The Hare Krishna movement is but the most recent phase of an ancient tradition of religious piety known in India as Vaishnavism. The devotees in the Hare Krishna temples live a full and active life of study, prayer, singing, and day-to-day management of the temple’s activities. Many are also active in a variety of more practical tasks, such as the publishing and sale of books, the manufacture of incense, the operation of vegetarian restaurants, and the launching of a small dance-drama company. All observe abstention from meat, intoxicants, and drugs. Only between married couples is sexual union permitted. In my judgement, it is indeed fortunate for these individuals and for the society in which they live that there has been available this outwardly exotic but inwardly authentic and well-rounded way of religious communal life.

“Accordingly, it is deeply disturbing to me to find young men and women who are finding personal religious authenticity in the Hare Krishna movement being subjected to gross misrepresentation, kidnapping, and other harassment of their personal integrity and religious convictions. I can well appreciate that many parents are baffled and disappointed to find their children alienated from their former way of life. To such parents I would say, ‘Please try to be calm and talk with persons who have some understanding of young adults and of the new communities into which they have gone. But please, do not be misled by the professional “deprogrammers.” They are engaged in a parasitic business that feeds upon fear and misunderstanding and uses illegal and brutal means. Whatever may be the mixture of misguided zeal and pecuniary interest motivating the “deprogrammers;” what they are doing is wrong and should be stopped.’ “

Each spring hundreds of ISKCON devotees from all corners of the world assemble in the sacred Indian villages of Mayapur and Vrndavana for a joyous celebration. The occasion is the anniversary of the appearance of Lord Sri Caitanya Mahaprabhu, the incarnation of Lord Krishna who inaugurated the Hare Krishna movement some five hundred years ago. 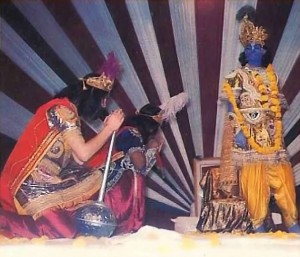 This year more than four hundred devotees undertook the pilgrimage. For many it meant over twenty-five straight hours of travel by chartered 747 jet. After the flight from New York City landed in Calcutta, the devotees boarded buses for the short ride to ISKCON temple grounds in Mayapur, on the bank of the Ganges in West Bengal. Finally, the weary but joyful pilgrims settled into newly-built quarters just a few minutes’ walk from Lord Caitanya’s birthplace.

Each day of the two-week Mayapur festival was packed with a variety of Krishna-conscious activities. The devotees toured local holy spots, attended classes on bhakti-yoga, and saw the Vaikuntha Players of New York perform dance and drama from the Ramayana and the Mahabharata, traditional Indian histories. The highlight of the program was the evening lectures on Krishna-conscious culture given by His Divine Grace A.C. Bhaktivedanta Swami Prabhupada, founder-acarya of ISKCON, and prominent Indian citizens like M. Bannerjee, Minister of Education for West Bengal. And, of course, prasada (spiritual food) was freely distributed, both to the devotees and to the hundreds of thousands of Indian guests who visited the center during the festival. The climax was a ten-course feast for ten thousand on the full-moon night of Lord Caitanya’s appearance.

From Mayapur, the devotees traveled 750 miles to Vrndavana, the rural village ninety miles south of Delhi where Lord Krishna displayed His childhood pastimes five thousand years ago. The Vrndavana festival featured daily workshops in such arts as Deity worship and Vedic cooking. And in nearby Mathura, the actual birthplace of Lord Krishna, the devotees put on a lavish exhibition of chanting, lectures, plays, and ISKCON art and books-as well as prasada distribution to thousands.

Chief Justice Praises Book That “Breathes Devotion on Every Page”

Dr. P.B. Mukharji, the eminent former Chief Justice of the province of West Bengal, India, recently expressed his great delight with the Sri Caitanya-caritamrta (The Character of the Living Force in Immortality), by His Divine Grace A.C. Bhaktivedanta Swami Prabhupada:

“I was delighted to read Sri Caitanya-caritamrta, by His Divine Grace A.C. Bhaktivedanta Swami Prabhupada, founder-acarya of the International Society for Krishna Consciousness. It is an account of the life of Lord Caitanya, the central themes of whose life were love for God, love for humanity, and love for the entire creation. This book breathes divinity and devotion on every page, and it brings an eternal message for the temporal world.”

“Although He lived five hundred years ago, Sri Krishna Caitanya is relevant to every aspect of modern life. Intellectually, He was the most supreme and superb scholar, learned in all the scriptures and an adept in all the yogic disciplines. Philosophically, His profoundly penetrating intellect cut through all the cobwebs of human thinking and pointed to the sure and final goal. In religion He is relevant today because He was cosmopolitan and universal, and socially He is relevant today because for Him there was no division, no difference, no castes, no priests, and no sects. In fact, all wealth, privilege, birth, and even tradition lost all validity before Him. From that point of view He was a great revolutionary. But His revolution did not hurt or defeat; it transformed human nature. Politically He is relevant today because He showed the way to passive resistance against evil.”

“This book, with the commentaries, is an intellectual, cultural, and spiritual landmark in the world. It is a book which should be in the library of every reader who values the essential glories of human life and the ultimate destiny of he universe.”