Back to Godhead > ~Featured~ > Calling the Blind Scientists’ Bluff 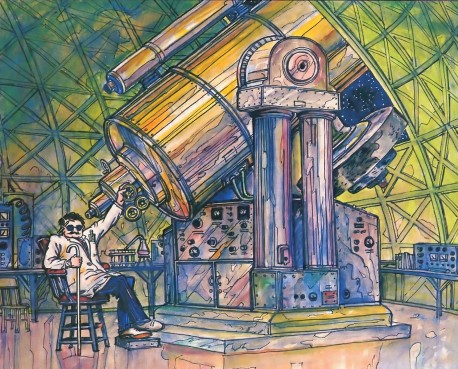 When we state that the material scientists are mistaken about where the planets are situated in space, we go against the deep faith of most people. The common man thinks, “But they have figured everything out mathematically. They have Ph.D.’s and Nobel Prizes, and they are using gigantic telescopes to measure the heavens with great accuracy.” In fact, however, the scientists themselves are the first to admit that they constantly make mistakes and have to revise their theories.

The real point is that no matter how huge a telescope is, or how precisely the data it reports is handled by a computer, the scientists themselves, being ordinary conditioned souls, suffer from four basic defects that completely invalidate their conclusions. These defects are stated in the Vedic scriptures to be bhrama, pramada, vipralipsa, and karanapatava.

The first defect (bhrama) is the tendency to make mistakes. For example, Columbus discovered America, but he thought it was India. Similarly, the so-called “astronauts” may have gone somewhere, but it wasn’t to the moon, as they believe.

The second defect (pramada) is the tendency to become illusioned. A good example of mass illusion is that almost everyone identifies himself as his body rather than as his real self, the soul within the body. This indicates a nearly universal lack of the most basic knowledge.

The third defect (vipralipsa) is the tendency to cheat. There are many cases on record of researchers attempting to prove a pet theory by doctoring up their laboratory findings. But doubtless the most harmful deception occurs when the scientists, knowing themselves prone to error and illusion, still put forward their jerry-built theories as gospel truth before an innocent public.

The fourth defect (karanapatava) is the imperfection of our gross senses. For instance, regardless of how perfect a telescopic lens may be, it is the defective eyes and brain of a human being (the scientist) that have to perceive and interpret the data. Therefore his conclusions are bound to contain some error.

These are some serious reasons to reject the material scientists’ contention that they possess real, factual knowledge. We should not give them much credit, nor should we accept what they say about the nature of the universe. Rather, we should realize that they are fallible men, subject to great imperfection. Perfect knowledge is beyond them.