Back to Godhead > ~Featured~ > KRISHNA — The Lifter of Govardhana Hill

KRISHNA — The Lifter of Govardhana Hill

“Being assured by Lord Krishna, all the inhabitants of the village—men, women, children, and animals—entered beneath the great hill and remained there for a whole week. They were simply astonished to see Krishna holding up Govardhana Hill with the little finger of His left hand. …” 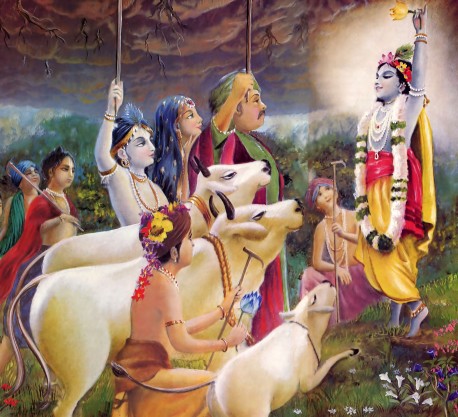 From the Srimad-Bhagavatam, translation and commentary by His Divine Grace A.C. Bhaktivedanta Swami Prabhupada. (Adapted by Drutakarma dasa.)

One day, in the village of Vrndavana, child Krishna saw His father Nanda Maharaja and the other cowherd men preparing a big sacrifice. “My dear father,” Krishna said, “who is this sacrifice for? What is it all about? Please tell Me—I want to know.”

Krishna is the Supreme Personality of Godhead, so He actually knew that the sacrifice was for Indra, the Lord of heaven. But because He was playing the part of Nanda’s child, He questioned His father just like a curious boy. Nanda remained grave and silent and went on with his business. “Krishna is too young to understand such complicated rituals,” he mused. Under the spell of Krishna’s divine energy, Nanda thought that the all-knowing Personality of Godhead was just his little boy.

Nanda turned to his child and said, “My dear boy, if You must know, this sacrifice is for Indra, the Lord of heaven. Indra controls the clouds that bring rain. Without rain we can’t grow nice grains, fruits, and vegetables, or grasses for our cows to graze on. So we’re holding this sacrifice to show our gratitude to King Indra.”

In reality, demigods like Indra are simply servants of Krishna, the Supreme Lord. The Bhagavad-gita clearly says that whatever benefits the demigods can bestow actually come from Krishna, and that instead of worshiping these lesser personalities, we should just worship Krishna, the Supreme Personality of Godhead. To teach Nanda and the other inhabitants of Vrndavana this lesson, Krishna said, “My dear father, I don’t think you have to offer this sacrifice to Indra. Even if you don’t please Indra, what can he do? He must pour water everywhere, whether anyone worships him or not. That’s his duty. Let’s have nothing to do with Indra, father. Instead, let’s hold a big sacrifice to honor Govardhana Hill.”

Govardhana Hill already occupied a special place in the hearts of Vrndavana’s residents, who cared very little about what went on in the wide world outside their forest village. The gopis (cowherd girls) would praise Govardhana Hill in this way: “Govardhana Hill is most fortunate—Krishna and Balarama always take Their cows and walk on its slopes, so Govardhana always enjoys the touch of Krishna’s lotus feet. In joyful gratitude Govardhana Hill supplies nice fruits and cool water to Krishna and the cowherd boys, and newly-grown grass to the cows. So we can understand that Krishna finds this hill very pleasing.”

“Oh no, father,” said child Krishna. “Please don’t wait! Making another sacrifice for Govardhana Hill will take too much time! Just please take all the things you were going to offer to Indra and take them to Govardhana Hill as quickly as you can.”

Krishna insisted, very politely and gently, and finally Nanda Maharaja relented. “All right. You just tell us what You want us to do.” Then Nanda and the other simple-hearted cowherd men did exactly what Krishna said. First they cooked all kinds of delicious foods in great quantity. They cooked first-class rice and spicy split-bean soup (dahl). They made zesty pakoras by dipping vegetable chunks in spiced batter and frying them in clear butter. They also prepared puris (flaky, puffed flat-breads), sweet rice (a thick drink made with milk, rice, and sugar), and many kinds of traditional Indian milk sweets, such as sandesa, rasagulla, and amrtakeli.

After preparing this feast, the cowherd men decorated their cows with silk hangings, gilded their horns, and fed them fresh, green grass. Then they dressed themselves very beautifully and helped the cowherd women climb into the gaily decorated bullock carts. Keeping the cows in front, everyone then circled Govardhana Hill and sang songs in praise of Krishna. Finally the village brahmanas chanted Vedic hymns and offered the feast—a huge mountain of food—to Govardhana Hill.

Suddenly, to the amazement of all, Krishna expanded Himself into a colossal transcendental form. Child Krishna (who remained as He was) and all the residents of Vrndavana fell to the ground and began to offer prayers. The giant figure of Krishna spoke for all to hear: “I am Govardhana Hill.” Then the mammoth form began to eat the mountain of food with great satisfaction. Everyone could clearly see that Lord Krishna and Govardhana Hill were one and the same. To this very day, pilgrims take stones and pebbles from Govardhana Hill and worship them in the same way that brahmana priests worship the Deity form of Krishna in the temples. Out of reverence for Govardhana Hill, devotees of Krishna will not even set foot on its sacred slopes. Instead they walk around the twelve-mile path circling its base—such is their devotion.

Afterwards, Krishna ordered the cowherd men to worship Govardhana Hill every year. And to this day, each October or November the inhabitants of Vrndavana gather around Govardhana Hill to observe this festival. They drive their cows around the hill and offer a huge feast. ISKCON temples worldwide also celebrate the festival of Govardhana Hill.

When King Indra saw Krishna stop the sacrifice meant for him, he became very angry. “These cowherd men shall suffer,” he said. “I’ll teach them to defy the demigods! Just because that boy Krishna told them to worship Govardhana Hill, they stopped my sacrifice. That boy talks too much. He’s just a child. What does He know about the cosmic situation? I will punish Him for being such an upstart.” 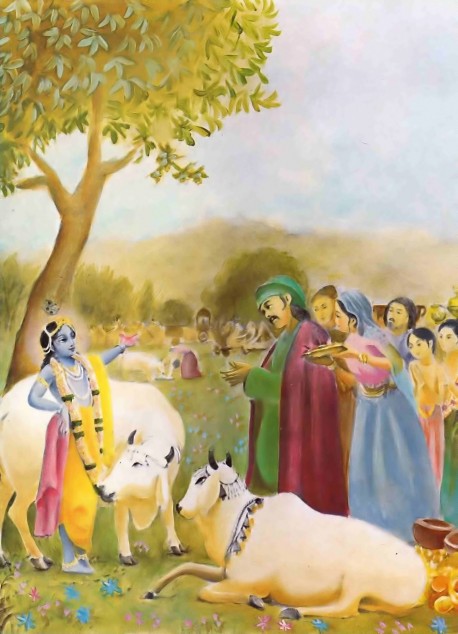 Krishna said, “My dear father, I don’t think you have to offer this sacrifice to Indra. Even if you don’t please Indra, what can he do? … Instead, let’s hold a big sacrifice to honor Govardhana Hill.”

Indra called his most powerful clouds, including the deadly samvartaka, which usually comes to destroy the world at the time of devastation. Indra told the clouds, “Go to Vrndavana and flood that village! Destroy Vrndavana! Drown all the cowherd men and all their cows with them. Don’t be afraid. I shall be flying behind you on my elephant. I shall attack Vrndavana with furious storms. Together we shall punish those impudent residents.”

Soon the dark, threatening clouds appeared over Vrndavana and began hurling down streams of rain and chunks of ice. Lightning crashed. Thunder roared. The wind howled and shrieked, driving the rain like piercing arrows. Floods covered all of Vrndavana’s fields and pastures. The men and animals shivered and trembled, and the cows bowed their heads and sheltered their calves beneath them.

In complete helplessness all the residents of Vrndavana came to take refuge at Krishna’s lotus feet. They prayed, “O Krishna, You are all-powerful and You are very kind to Your devotees. Please protect us from Indra’s wrath.”

“Don’t be afraid,” Krishna said. “You are all My pure devotees and have no shelter but Me. I shall protect you. Indra is trying to prove his supremacy, but I shall take care of him. Actually, Indra is My devotee, but somehow he has become puffed up and mad with power. I’ll take away his false prestige and bring him back to his senses.”

Then, with one hand. Lord Krishna picked up Govardhana Hill, just as an ordinary child picks up a mushroom. “My dear brothers. My dear father, My dear friends, now you can safely enter under the umbrella of Govardhana Hill. Don’t be afraid. I will not let the hill fall from My hand.” 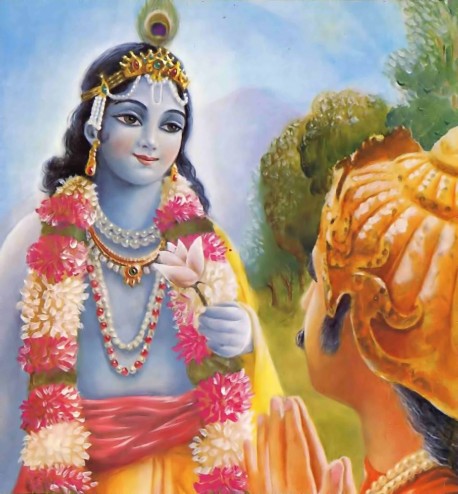 Krishna accepted Indra’s apology and said, “My dear Indra, please return to your kingdom, but always remember this: no one is superior to Me.”

Being assured by Lord Krishna, all the inhabitants of Vrndavana—men, women, children, and animals—entered beneath the great hill. They remained there for a whole week and yet did not feel hungry, thirsty, or at all uncomfortable. They were simply astonished to see Krishna holding up Govardhana Hill with the little finger of His left hand.

When King Indra saw Krishna’s mystic power, he was thunderstruck and baffled. He called off all the clouds and made the strong winds stop. In a short time the sky over Vrndavana became completely clear and the sun shone brightly.

Krishna said, “My dear cowherd men, now you can return to your homes along with your wives, children, cows, and valuables. The danger is over. The rain has stopped and the floodwaters are going down.” The cowherd men loaded up their carts and slowly departed with their cows and families. After they had gone, Krishna carefully put down Govardhana Hill, exactly where it had been before and where it remains to this day.

All the inhabitants of Vrndavana came to Krishna and embraced Him in great ecstasy. The gopis, Mother Yasoda, Nanda, and Krishna’s elder brother Balarama blessed Him over and over again. From the heavens the demigods beat their drums, played their tambouras, sounded their conchshells, and poured down showers of flowers.

Now that Krishna had saved the inhabitants of Vrndavana, King Indra appeared before Him in a secluded forest glade. Indra’s golden crown was dazzling like the sun, but still he fell down at Krishna’s lotus feet. “My dear Lord,” he said, “I am very sorry I sent floods and hailstorms to Vrndavana. I became angry because You stopped the sacrifice that the cowherd men were going to hold for me. I was puffed up with false pride and behaved like an ignorant fool. But now, by Your grace, I can see that You are the Supreme Lord. I beg You to forgive me. I am Your eternal servant.”

Krishna accepted Indra’s sincere apology and said, “My dear Indra, please return to your kingdom, but always remember this: no one is superior to Me.”

Before departing. King Indra and all the other demigods bathed Krishna with the milk of cows from the spiritual world and with Ganges water from the trunk of Indra’s elephant. The wives of the demigods danced with joy and satisfied the Lord by pouring showers of flowers from the sky. Krishna was very pleased with this worship, and therefore the earth became bountiful with natural gifts. The happy cows overflooded the land with their milk. The water of the rivers nourished the trees, which put forth all sorts of delicious fruits and fragrant flowers. Also, the trees began pouring drops of honey, and the hills and mountains produced potent medicinal herbs and valuable jewels. Because of Krishna’s presence, all these things happened very nicely, and the lower animals, who are generally envious, were envious no longer. At last, King Indra and the other demigods took Krishna’s permission and went back through cosmic space to the heavenly kingdom.