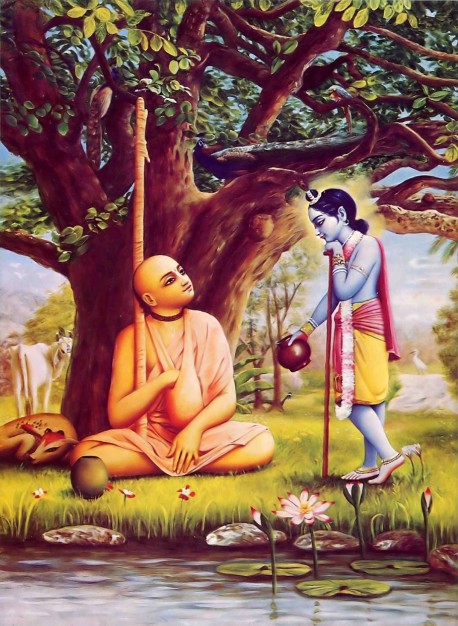 Before Madhavendra Puri, most Indians worshiped Lord Krishna in a ritualistic fashion, according to strict rules and regulations. Such formal worship is necessary for those who have not awakened their natural desire to serve the Lord with love and devotion. But Madhavendra Puri was fully absorbed in spontaneous affection for Krishna, and therefore he was able to rise above the forms of worship prescribed for the neophytes.

Madhavendra Puri appeared almost mad in his love of God. He loudly chanted and sang the names and glories of the Lord without thinking of the time or place. Sometimes in his ecstasy he didn’t know whether it was day or night. Sometimes he laughed and sometimes he wept. Sometimes he danced wildly and sometimes he fell to the ground unconscious. He took absolutely no interest in anything not connected with Krishna, and for fear of talking about anything other than the Lord, he always lived without a companion. He would eat only if someone offered him food—otherwise he would simply fast.

In many remarkable ways Krishna returned Madhavendra Puri’s intense love. Once Madhavendra was fasting and meditating beneath a tree in the forest of Vrndavana, where thousands of years before Krishna had played as a child. Suddenly a beautiful cowherd boy (gopala) came with a pot of milk and placed it before Madhavendra. “Please drink the milk I have brought you,” the boy said. Seeing the beauty of the boy, Madhavendra Puri became satisfied in his mind, and hearing these sweet words, he forgot all hunger and thirst. Then within an instant, the boy left the place and did not return. Madhavendra Puri’s heart was filled with wonder. Later, he realized who the boy actually was and cried out in; great ecstatic love: “I saw Lord Krishna directly—but I could not recognize I Him!”

Soon afterwards, the same cowherd boy appeared to Madhavendra Puri in a dream and revealed to him the location of the Gopala Deity. A brahmana priest had tried to hide this Deity of Krishna from marauding Muhammadan soldiers and had buried Him nearby. In the dream Krishna told Madhavendra Puri, “For many days I have been observing you, and I have been wondering, ‘When will Madhavendra Puri come to serve Me?’ Now that you have come, please unearth the Gopala Deity, who is none other than My very self.” So out of intense love Madhavendra Puri excavated the Gopala Deity, built an exquisite temple for Him, and arranged for lavish daily worship. “I have accepted your service,” said Gopala, “because of your ecstatic love for Me.”

To test Madhavendra Puri’s love still further, in another dream Gopala asked him to bring a special kind of sandalwood pulp to cool His body. Gopala was still feeling hot from being buried in the jungle for so many years, and sandalwood pulp is well known for its soothing, cooling effect. “Bring sandalwood pulp from Jagannatha Puri,” said Gopala. “Kindly go quickly. You must. No one else can do this for Me.”

Delighted with this chance to serve his dear Lord, Madhavendra Puri set off on foot on the arduous eight-hundred-mile journey to Jagannatha Puri, on the Bay of Bengal. Along the way he stopped in Remuna at the temple of Gopinatha, and this Deity of Krishna showed him another loving favor. Every day the temple priests offered Gopinatha twelve pots of the most delicious sweet rice in the world. (Sweet rice is a preparation made with milk, rice, and sugar and served cold.) Madhavendra Puri wanted to taste a little of it so that he could prepare a similar sweet rice for his own Deity, Gopala. But Madhavendra immediately checked this thought and felt that he had committed a great sin by wanting to eat what was being offered to the Lord. Without saying a word to anyone, Madhavendra Puri left the temple and went to get some rest in a stall in the town marketplace.

Meanwhile, the Gopinatha Deity spoke to one of His brahmana priests in a dream: “Please get up and open the door to the temple. There you will find a pot of sweet rice I have kept for Madhavendra Puri. Take it to him. He is sleeping in the marketplace.”

Dutifully the priest awoke, found the pot of sweet rice, and took it to the marketplace. Then he began to call out, “Madhavendra Puri! Madhavendra Puri! Please come and take this pot of sweet rice—Lord Gopinatha has stolen it for you! Please take it and enjoy it to your heart’s content! You are the most fortunate person in the world!” On hearing this invitation, Madhavendra Puri came out, and with ecstatic love he ate the sweet rice the Lord had sent to him. To this day the Deity in the temple at Remuna is known as Ksiracora Gopinatha—the Deity who stole sweet rice for His pure devotee.

After this incident Madhavendra Puri pondered, “The Lord has given me a pot of sweet rice, and when the people hear of this tomorrow morning, there will be great crowds.” Thinking in this way, Madhavendra Puri offered his obeisances to Gopinatha on the spot and left Remuna before the morning light.

After much walking he reached Jagannatha Puri and obtained eighty-two pounds of Malayan sandalwood—a valuable burden of love to bring back to his Gopala Deity. Even though he had to pass through provinces heavily patrolled by Muhammadan soldiers and infested with bands of thugs, Madhavendra Puri was not at all anxious. He was concerned only about carrying the sandalwood back to his beloved Gopala, and he didn’t even take personal inconveniences or impediments into consideration. He just wanted to serve the Lord.

When he arrived at Remuna, Madhavendra Puri again visited the temple of Gopinatha, and the priest there again served him the famous sweet rice. Now Madhavendra still had the longest and most difficult part of the journey ahead of him. But as he slept that night his own Gopala Deity appeared in a dream and said, “O Madhavendra Puri, there is no difference between My body and Gopinatha’s body. They are one and the same. Therefore, if you smear the sandalwood pulp on His body, you will also be smearing it on My body. Thus the temperature of My body will be reduced. You should not hesitate to act according to My order. Believe in Me and just do what is needed.” In this way Gopala saved His devotee from possible injury at the hands of enemies. Madhavendra Puri had passed the Lord’s test of his love and devotion. To this day people who travel to India can visit the Deities of Gopala and Ksiracora Gopinatha and experience some of the same devotional feelings that inspired Madhavendra Puri.

We can experience God in different ways. Some worshipers know Him as the formless, all-pervading spiritual effulgence. Others experience Him in their own hearts as the Supersoul (Paramatma)—the witness, guide, and well-wishing friend. But the most advanced worshipers, such as Madhavendra Puri, see God face to face in His original form as Krishna the cowherd boy, the Supreme Personality of Godhead. To accept loving service from His pure devotee Madhavendra Puri, the Lord appeared personally before him, spoke to him, and gave him a pot of milk to drink.

In all religions there is some feeling of love of God, but such love varies in degrees of intensity. In his book The Nectar of Devotion, the great Krishna-conscious spiritual master Srila Rupa Gosvami has analyzed the different kinds of love of God. First we may passively appreciate the sublime qualities of the Lord, as did the Kumaras, the four celibate sons of Lord Brahma. Progressing further, we come to the stage of desiring to serve the Lord as the supreme master. Hanuman, the monkey servant of Lord Ramacandra, exemplifies this kind of love. In time, when the relationship of servant and master becomes more intimate, we may advance to the stage of friendship with the Supreme Lord. Krishna’s cowherd boyfriends are examples. Still more advanced is the worship of Krishna as our child. At this stage Krishna allows the worshiper to take the superior role of His mother (like Yasoda) or father (like Nanda). The highest form of love of God is that displayed between lover and beloved. The gopis (milkmaids) of Vrndavana love Krishna in this way. And of all the gopis, the Lord’s eternal consort Srimati Radharani displays this conjugal love of God to the highest degree.

At his life’s end Madhavendra Puri was deeply absorbed in conjugal love for Krishna. In great ecstasy he repeatedly uttered a famous verse beginning with the lines “O my Lord! O most merciful master! When shall I see You again?” It is said that this verse was originally spoken by Srimati Radharani Herself. Before the time of Madhavendra Puri, nearly all devotees worshiped Krishna alone—without His female counterpart—but after Madhavendra Puri introduced conjugal love of God into India’s spiritual life, more and more devotees began worshiping Krishna together with His eternal consort Radha.

Before Madhavendra Puri appeared, the disciplic succession of Madhvacarya (see BTG 12/10) had been full of ritualistic ceremonies—with hardly any sign of love of Godhead. Madhavendra Puri was the first successor of Madhvacarya to exhibit the symptoms of love of Godhead. In fact, it is said that the tree of devotional service to Lord Krishna sprouted in him and later grew tall and broad in Lord Caitanya, the incarnation of Krishna for this age of quarrel. Himself a disciple of Madhavendra Puri’s disciple Isvara Puri, Lord Caitanya spread devotional service throughout India and ordered His own disciples to spread devotional service to every town and village in the world. Now, after years of careful cultivation by His Divine Grace A.C. Bhaktivedanta Swami Prabhupada, the devotional tree that sprouted in Madhavendra Puri has produced a fast-growing branch called the International Society for Krishna Consciousness.

One Response to Great Spiritual Masters Throughout History: Madhavendra Puri