Back to Godhead > ISKCON > News > Every Town and Village: New Era For ISKCON in India

Every Town and Village: New Era For ISKCON in India 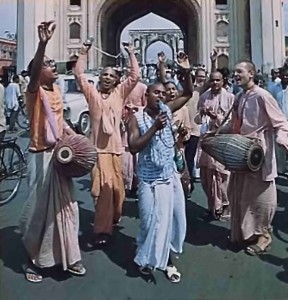 Recently, a bullock cart filled with ISKCON devotees rumbled along the back roads of the east Indian province of Orissa. When they and their leader Lokanatha Swami reached Badrak, they led crowds of delighted townspeople in chanting the Hare Krishna maha-mantra and served out a feast of prasada (vegetarian food offered to Lord Krishna with devotion). Also, the devotees left many Badrak residents with inexpensive editions of the ancient Vedic literatures, as translated by His Divine Grace A.C. Bhaktivedanta Swami Prabhupada.

Observing all these goings-on was Bhakti Vikash Maha-yogi Maharaja, the manager of the local Krishna temple. He felt so impressed with the devotees’ enthusiasm for spreading Krishna consciousness that he asked them to take over the management of his temple and use it as a base for their missionary work.

This brief encounter marked a real breakthrough for Krishna consciousness in modern India. Now, the Badrak temple is part of the Gaudiya Matha, a multi-temple federation that dates back to the first part of the century, when Srila Bhaktisiddhanta Sarasvati Goswami (Srila Prabhupada’s own spiritual master) started a campaign for reviving Krishna consciousness throughout the world. Srila Bhaktisiddhanta opened sixty-four Gaudiya Matha temples in India and asked his disciples to open similar temples everywhere, especially in the United States and Western Europe. But after he passed away in 1936, his disciples split into factions and fought in the courts for property and power.

This petty legal wrangling has carried on through the years, but Srila Prabhupada has stayed clear of it and mindful of Srila Bhaktisiddhanta’s plan to spread Krishna consciousness throughout the world. In 1965, at age seventy, Srila Prabhupada journeyed to America to found the International Society for Krishna Consciousness. In a dozen years he has opened more than one hundred Krishna-conscious centers worldwide, but the members of the Gaudiya Matha have been slow in acknowledging his achievements. Now, at long last, this acknowledgment is coming—at least in Badrak.

When Bhakti Vikash Maha-yogi Maharaja saw the vigorous missionary work of the ISKCON devotees, he knew that they and their spiritual master Srila Prabhupada are bona fide followers of Srila Bhaktisiddhanta. At that moment he determined to place the Gaudiya Matha temple in Badrak in their charge, and not long afterward, he and the ISKCON devotees approached the temple’s board of trustees to see whether they would agree to the proposal. After interviewing the devotees, the trustees concluded, “These ISKCON members are devotees of the highest order.” And without hesitation the trustees pledged their support.

ISKCON leaders hope that other Gaudiya Matha temples will follow after their sister temple in Badrak and fully support the nonsectarian mission of spreading Krishna consciousness to every town and village in the world.

To fulfill the plan of his spiritual master Srila Bhaktisiddhanta Sarasvati Goswami, His Divine Grace A.C. Bhaktivedanta Swami Prabhupada has not only started many temples but has also translated the primary works of ancient India’s Vedic literatures into English. Dr. O.B.L. Kapoor, Emeritus Chairman of the Philosophy Department in Benares’s Government Postgraduate College and himself a disciple of Srila Bhaktisiddhanta, has this to say about Srila Prabhupada’s translation of the Sri Caitanya -caritamrta:

“Sri Caitanya is the pioneer of a great social and religious movement that began in India a little less than five hundred years ago. Sri Caitanya-caritamrta is the most authoritative biography of this great saint and social reformer. But the work is more than a biography. Its greatness consists not so much in the literary skill with which the story of Caitanya’s life is told, but in its complete exposition of the profound tenets of the philosophy and religion of Sri Caitanya as exemplified in His life. Thus, it is a remarkable document of great historical and sociological importance.

“This English edition translated by His Divine Grace A.C. Bhaktivedanta Swami Prabhupada is superb. It contains the original Sanskrit and Bengali verses with their English transliterations, word-for-word synonyms, translations, and elaborate purports, easily bearing testimony to the author’s profound knowledge of the subject.”