Prabhupada’s Palace — “A Beautiful Setting for a Diamond”

“As we began to work on Prabhupada’s home,
it began to take on the shape of a palace.” 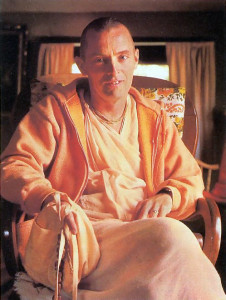 The idea for Prabhupada’s Palace came from His Divine Grace Kirtanananda Swami Bhaktipada, one of Prabhupada’s first disciples. Under Prabhupada s direction, it was Bhaktipada who started the New Vrindaban Community in 1968. And before passing away, Prabhupada appointed him one of the spiritual masters who would initiate disciples. In his room in New Vrindaban and while riding about in his jeep, supervising the community’s work. Bhaktipada answered questions for the readers of BACK TO GODHEAD.

BTG: Could you describe how the idea for Prabhupada’s Palace got started’?

Srila Bhaktipada: In 1973 we were getting ready to start a temple for Krsna at the Govindaji site down at Bahulabana [the principal farm at New Vrindaban]. We had already done the preliminary excavation work and dug a little footer.

So we began. Actually, we laid the cornerstones for both buildings on the same weekend. We were expecting to be able to finish Prabhupada’s home rather quickly and get on with the temple. But as we began to work on Prabhupada’s home, it began to take on the shape of a palace. This was not the original conception—the original idea was rather modest. The size of the building is still modest, of course, but the intricacy in the work is rather unusual.

So the palace gradually developed, and now we are ready to take up our next task, which is to build a palace for Vrndavanacandra, Lord Krsna.

BTG: Could you explain what Prabhupada’s Palace is, what it means?

Srila Bhaktipada: Prabhupada’s Palace is to Prabhupada what a beautiful setting is to a diamond. The palace is a means of drawing attention to Srila Prabhupada.

Unfortunately, during Prabhupada’s life, and almost up till now, Prabhupada has never become very prominent through the Hare Krsna movement. Of course, he arranged it that way. He could have made it the Bhaktivedanta Swami Movement—but he didn’t, because he is a humble Vaisnava, a humble devotee. But as his disciples, we should understand that for the benefit of all humanity, Prabhupada should be as prominent as Jesus Christ. Like the Christians, we accept the philosophy that no one can approach God except through the pure devotee.

BTG: Could you explain that?

Srila Bhaktipada: Can you see God?

Srila Bhaktipada: Then you have to hear from someone who does see God. The spiritual master sees God; therefore he can instruct us.

BTG: People sometimes want to know why a master whose teachings are spiritual should be worshiped with such material opulence.

Srila Bhaktipada: By the same token, they wonder why God should be worshiped with opulence. But what do they want to do with the opulence that God has put everywhere? It’s not that they want to neglect it. No. They say, “Let me enjoy the opulence, and let us give God nothing. After all, He is spiritual.”

BTG: But that opulence could have been used to feed people or open hospitals.

There was such an incident in the Bible also. When someone broke open some costly ointment and spread it on Jesus’s feet, Judas said, “Why was this not sold and given to the poor?” And the reply was, “It’s not that you’re interested in the poor, Judas. You wanted to take the money and spend it for yourself.”

If people are actually interested in feeding the poor and helping the distressed, there is plenty of money. Let them stop all their own nonsense. Stop spending to kill poor animals. Every person could save at least ten or fifteen dollars a week if they would just stop eating meat. What to speak of all the land that would be saved for growing food if they stopped feeding grain to animals for slaughter. We could sumptuously feed every man, woman, and child on this planet if they would simply stop killing the animals. Why should people criticize us if we build a building to glorify Krsna and His devotee? They are simply envious: “Why wasn’t this building built for me?”

BTG: You said that making Prabhupada prominent will benefit all humanity. How is that so? After all, people may never have heard of him, or they think of him as a religious leader of a particular group….

Srila Bhaktipada: No matter how they become acquainted with Srila Prabhupada, they’ll want to know more about him. His books have been distributed for the last ten years, but sometimes we wonder how many people are reading them. The books may be sitting on the shelves. But if people come to Prabhupada’s Palace and see the beauty of the work and the devotion of those who have worked here, they may take the books down off the shelf and read them. Then Prabhupada can deliver them his mercy.

We have to give people a setting in which they will feel the importance of hearing from Srila Prabhupada. Otherwise they may take him to be ordinary—just some swami, or just some man who started a movement or cult. If they actually see the palace, they will feel, “This is unique.” And when someone is in a very opulent position, naturally people will listen, because people are attracted by opulence.

BTG: Might one not argue that this is a contrivance, that you could glorify any ordinary man and people would think him important?

Srila Bhaktipada: The difference is this. Prabhupada always said that you can dress a fool up to look like a king, but when he opens his mouth anyone can understand, “Oh, he is a fool.” So if someone is a fool, then there is no use in dressing him up as a king. But if someone is actually a king and you dress him like a king, that is proper. So because Prabhupada actually should be worshiped like this—because he actually deserves this position, because he actually looks right in this position—when he opens his mouth and speaks, it sounds exactly right too. Therefore it is perfect.

BTG: When people visit the palace, what is it you want them to come away with?

Srila Bhaktipada: At the lowest level, they can come away with some appreciation of the building: “Oh, this is a beautiful building.” Actually, that is Krsna consciousness also. The building is related to Krsna, so simply by appreciating the building they make advancement in Krsna consciousness. Almost all of them go away with one of Prabhupada’s books. Almost all of them say, “We want to come back.”

Actually, that is the whole idea—that this will become a place of pilgrimage, where people can come, relax, and make spiritual advancement simply by being here. That is very important. Instead of taking a vacation and going to some useless place, take your vacation and go visit Srila Prabhupada and the Palace, get the world’s best prasada [spiritual food], and experience real spiritual life.

BTG: What do you mean by “a place of pilgrimage”? We think of someone trekking to Mecca or Jerusalem….

Srila Bhaktipada: The idea is that we cannot expect everyone to become a fulltime devotee in the sense that he gives up his whole materialistic way of life. But Krsna consciousness says, “All right, if you can’t do that, then do this:’ At one level, if you are a family man or a businessman but you want to go on vacation, then at least once a year you can elevate your consciousness by visiting such a holy place as Srila Prabhupada’s Palace. That is an advantage, because as you grow older you will realize the value of this spiritual consciousness.

According to our Vedic culture, one shouldn’t remain in family life up to the very end. Rather, when he’s fifty or fifty-five he should retire and take up spiritual life by going and living in a holy place. If one can start this custom—visit a holy place at least once a year, associate with holy persons, taste the nectar of spiritual life—then later in life that spiritual advancement will naturally follow.

BTG: Prabhupada said that this palace is an expression of the love of the disciple for the spiritual master. Could you explain what this love is, what it means?

Srila Bhaktipada: That is the spiritual master’s mercy, of course. Whatever his son or his young child does, he accepts in that way. Actually I have no love for Prabhupada—but I wish I did. I am simply praying to Prabhupada that if I continue to worship him he will kindly bless me with a little pure love. But actually I have no real love or appreciation for Prabhupada. I’ll always feel that way. I wish I could love Prabhupada. I see so many of my Godbrothers serving Prabhupada day and night, and I am sitting here doing practically nothing.

Certainly these devotees who have built the building have great love for Prabhupada. They have sacrificed so much. They’ve been working for years now, winter and summer.

BTG: What is the benefit for them?

Srila Bhaktipada: That is the nature of love. When you serve your beloved, your service itself is the benefit. When you speak of a “labor of love,” for the lover it is not work. It is all joy. Therefore Prabhupada said, “In Krsna consciousness there is no work.” Someone said, “Prabhupada, sometimes a little work.” Prabhupada said, “No—no work.” Actually that is a fact. In Krsna consciousness there is no work—it is all love. Therefore it is all joy. There is only singing, dancing, and feasting in Krsna consciousness. Whatever a devotee speaks, that is poetry. Whatever a devotee eats, it is a feast, because Krsna has first tasted it. So there is singing, there is feasting, and there is dancing. Simply vibrate the Hare Krsna mantra—Hare Krsna, Hare Krsna, Krsna Krsna, Hare Hare/ Hare Rama, Hare Rama, Rama Rama, Hare Hare—and you will dance your whole life through.

BTG: Of course, some of the devotees who built the palace are Prabhupada’s disciples, and some of them are not—they are your disciples. How do they fit in?

BTG: What is it you most want people to know about Srila Prabhupada?

Actually, one of the first dreams I ever had about Srila Prabhupada, in 1966, was on this very point. In my dream I saw Lord Krsna speaking Bhagavad-gita to Arjuna, and then the dream shifted, and I was fitting at Srila Prabhupada’s feet, and he was instructing the same thing to me. And I knew from that instant that this is the real essence of Krsna consciousness: to accept the spiritual master in the same way that Arjuna accepted Krsna. Because we are hearing the same message Arjuna heard, there is actually no difference—our position is as good as Arjuna’s. In fact, in one way it is better.

BTG: How is that?

Srila Bhaktipada: Because we can relish the conversation between Krsna and Arjuna, and we also have the relish of Srila Prabhupada. In spiritual life there is perfect, more perfect, and most perfect—full, more full, and most full.