In The Hills Of West Virginia

A recent visitor says, “I’ve never seen such a beautiful place in my life. It looks like heaven.”

“In the wooded hills of Marshall County,” says the Wheeling News-Register, “off U.S. 250 in Limestone, old farmhouses and barns dot the countryside. Driving along the back roads, one sees acres of woods interspersed with hayfields and herds of cattle.

“But driving around a sharp bend on one of those rutted byways, a traveler may think he is seeing a mirage. For perched on a ridge overlooking miles of farmland and woods is a palace.

“A palace made with gold, silver, marble, onyx, stained glass, and teakwood. A palace with handpainted ceilings modeled after the works of European masters. A palace that has taken six years to build. Srila Prabhupada’s Palace, in the Hare Krishna community of New Vrindaban……

Adds the New York Times, “The magnificently opulent black-and-gold-domed palace … has left many of the visitors gawking. It has Italian marble floors, walls inlaid with Iranian onyx, gold-leafed column caps, stained-glass windows in the shape of peacocks, numerous crystal chandeliers, and downspouts outside in the shape of elephant heads. All this sits atop a ridge overlooking miles of hills, forests, and farmlands in all directions.”

Professor George Clark, of Ohio State University’s Department of Architecture, says, “This could turn into one of the most important and informative tourist attractions in the country.”

And yet as the Pittsburgh Press notes, “Prabhupada’s Palace was built entirely by Krishna devotees, most of them unskilled before the project began:” 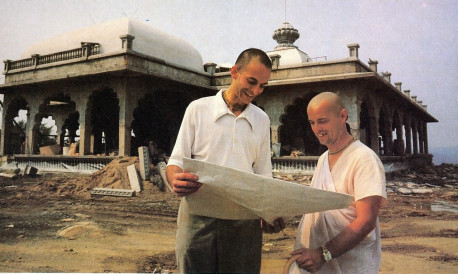 Planning and building took a full six years. Srila Kirtanananda Swami Bhaktipada (at right) conceived the project and saw it through in all its details. Bhagavatananda dasa (left) drew up the plans, engineered the construction.

Strictly speaking,” says Hans Keilman, a Dutch architect and industrial designer, “the Palace does not follow the rules of architecture.”

And Bhagavatananda dasa, one of the designers, admits, “I haven’t the slightest idea whether we broke the rules or not. I don’t even know what the rules are.” 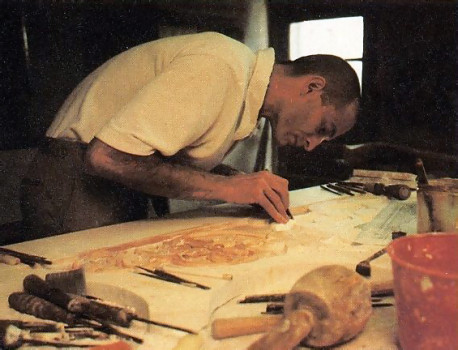 “This building transcends architectural considerations,” explains Keilman. “Ordinarily, a building gets its beauty from two things—the money that goes into it, along with the skill of the architect. But this building’s beauty comes from the inspiration of the people who worked on it. They designed it by getting inspired as they went along. They just stayed and worked and became inspired. So you wonder, ‘What, exactly, could have inspired them?’ “ 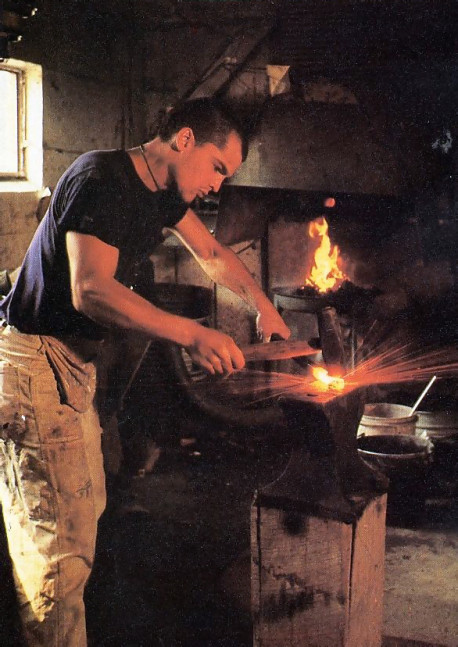 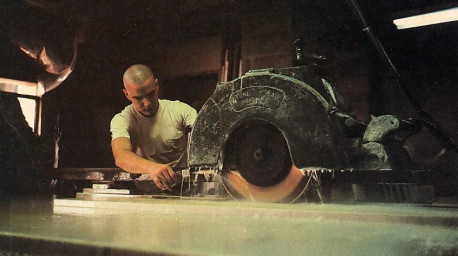 Cutting marble was one of the many skills the devotees had to teach themselves. “In the beginning,” Srila Bhaktipada told the New York Times, ”we didn’t even know how to lay blocks. As our Krsna consciousness developed, our building skills developed, then our creativity developed and the scope of the project developed.” along. 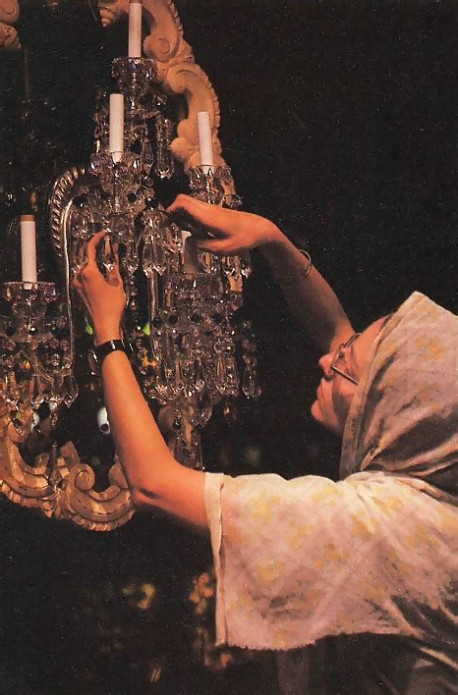 A crystal sconce gets finishing touches from Isani-devi dasi , who designed forty sconces and chandeliers for the Palace. 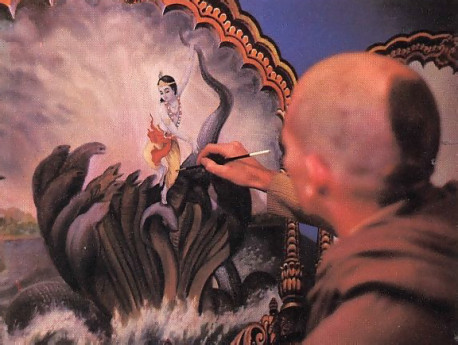 Artists worked from scaffolds to paint murals near the ceiling. (To paint on the ceiling, they worked Michelangelo style, on their backs.) 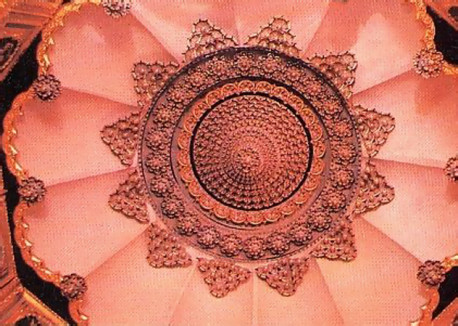 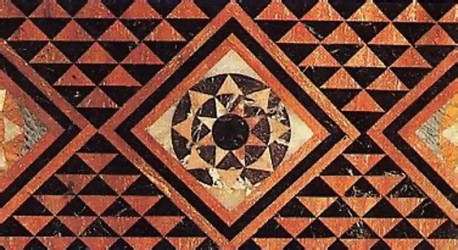 Onyx and marble from Turkey, Italy, and France form a centerpiece in the floor of the main hall . 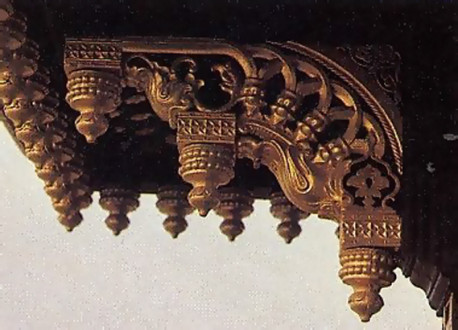 Inside the main dome, sixteen oil paintings or Krsna’s pastimes surround a central ornament of carved gypsum, cement, and metal filigree, with hanging crystals-4,200 separate pieces in all. 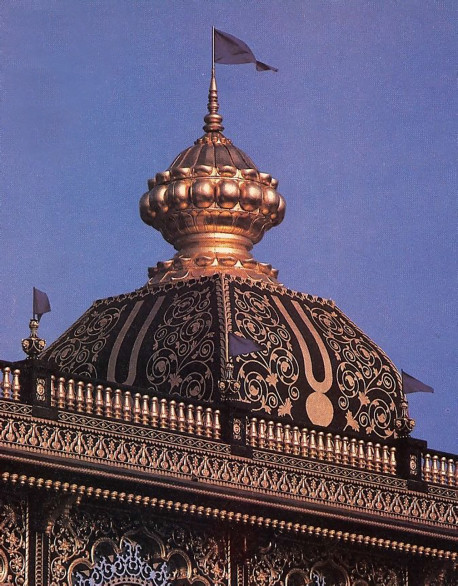 The goldleafed main spire is solid concrete and weighs 300 tons . 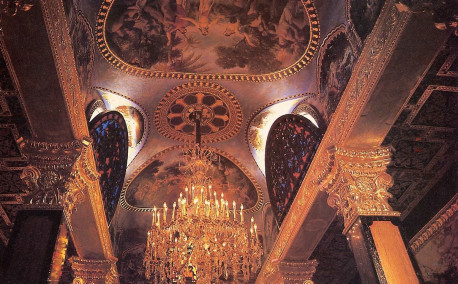 Looking up in the main hall. 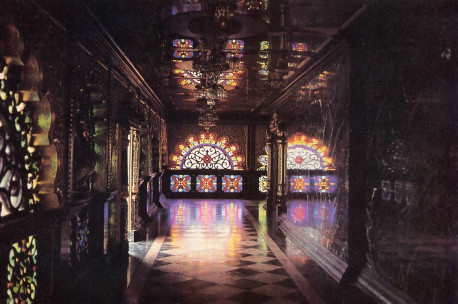 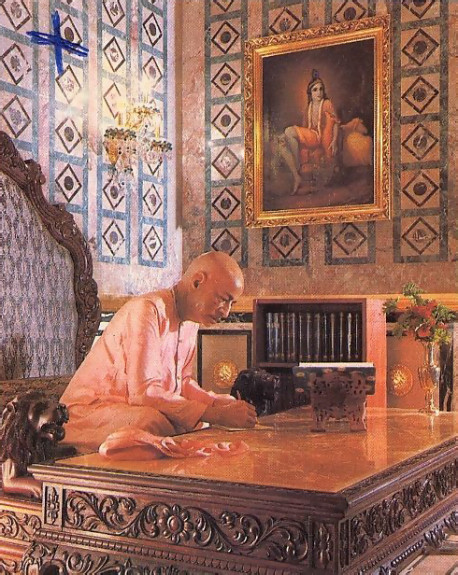 Srila Prabhupada, depicted in his study. “The idea,” says Srila Bhaktipada, “is to preserve the memory of Srila Prabhupada in his most important activity of translating the Vedic literatures.”

“This is the great riddle,” says Bhagavatananda. “‘What made these people do this?’ 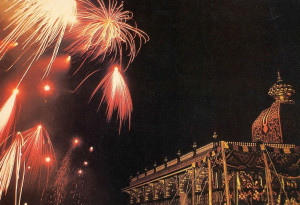 That was His Divine Grace A.C. Bhaktivedanta Swami Prabhupada. In 1965 Srila Prabhupada left India for America. With him he carried a few copies of his translations of the Vedic literatures plus the order of his spiritual master—to bring to modern man the spiritual peace and fulfillment of the Krsna conscious culture. In 1968, shortly after the New Vrindaban farming community had gotten its start, Prabhupada talked about its significance. 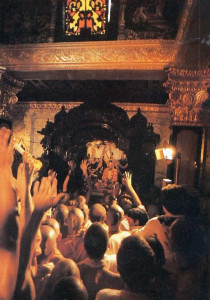 Devotees cheer as the inner doors open upon the figure of Srila Prabhupada. “It’s very nice,” says Srila Bhaktipada, “when we have guests come and they look all around the Palace and admire how nice it is. And when they see Prabhupada and say, ‘This is the best thing ,’ then we feel like we’ve been successful.”

“The Vrindaban conception,” he said, “is that of a transcendental village without the botherations of the modern industrial atmosphere. In Krsna’s homeland of Vrindaban, the people can fully depend on nature’s beauty and the cows, and this New Vrindaban should be such an ideal village—where the residents will have simple living and high thinking.”

Srila Kirtanananda Swami Bhaktipada (one of Prabhupada’s first American disciples and New Vrindaban’s organizer from the very beginning) says that the turning point in the community’s life has been the Palace. “We were planning that our first major building effort would be a temple for Krsna,” he says. “But after a while I began to think this was not exactly right. The Vedic literatures say that one has to approach Krsna through the spiritual master. So we decided first of all to construct a palace for Prabhupada. 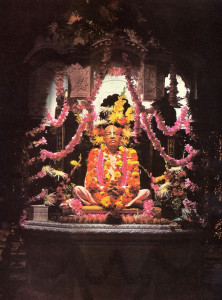 “There is no one in the world who can compare to Prabhupada—what he has done for the whole world by bringing Krsna consciousness to light and making it available to everyone. That Krsna consciousness should spread throughout the world,” says Bhaktipada, “was the desire of Lord Sri Krsna Caitanya when He appeared in India five centuries ago. But what Lord Caitanya started was not actually developed and manifest until Prabhupada. He has taken that seed and made it grow into a great tree with much nice fruit in the form of love of God. So the Palace is a means of bringing Prabhupada to the world.”