Pope Receives Bhagavad-gita As It Is — Every Town and Village

Pope Receives Bhagavad-gita As It Is 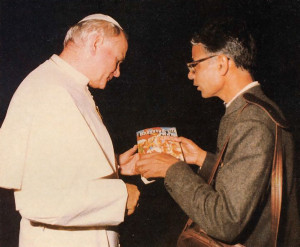 Vatican City—Before embarking on his recent pastoral tour of Europe and the United States, His Holiness Pope John Paul II received a copy of Bhagavad-gita AS IT IS, the scripture that sets forth the basic philosophy of the Krsna consciousness movement. Mr. Ramsahai Purohit, an international peace worker from India and a member of the movement, gave the Pope the book during a personal audience at St. Peter’s Basilica.

Bhagavad-gita, the scripture most widely known and revered in India, was written in Sanskrit long before the birth of Christ. Bhagavad-gita As It Is is a translation and commentary by His Divine Grace A.C. Bhaktivedanta Swami Prabhupada, the founder and spiritual preceptor of the International Society for Krishna Consciousness. More than four million copies are now in print, in fourteen languages.

Calcutta—“People from all walks of life joined the celebration,” reported the Amrita Bazar Patrika. “A big chariot, with all pomp and grandeur, was brought out in central Calcutta by the International Society for Krishna Consciousness (ISKCON). It was possibly the tallest chariot ever in Calcutta.” Approximately two million Calcutta residents turned out to see the annual Ratha-yatra, or Chariot Festival, honoring Jagannatha—Krsna, the Lord of the Universe—and organized by the “sahib-Vaisnavas,” or Western devotees of Lord Krsna. Heading up this year’s festival committee in Calcutta was Srila Jaya Pataka Swami Acaryapada, coordinator of ISKCON’s activities in Bengal and Orissa. Srila Jaya Pataka Swami, who came to India nine years ago from the United States, is one of the few Westerners to have received citizenship from the Government of India.

When the chariot parade began (in front of the ISKCON temple in Calcutta), 300,000 people were gathered.

Traditionally the parade is led by musical groups who chant prayers to Jagannatha and play drums and cymbals. This year twenty such sankirtana parties from villages all over Bengal arrived and lined up for a mile in front of the chariot, around which hundreds of people crowded to get a chance to pull it with long ropes.

The journey lasted several hours, and at nightfall the procession was still underway. The Calcutta police said it was the biggest procession they had ever seen, even bigger than those honoring heads of state. At the end of the parade, hundreds of thousands were waiting for lectures, chanting, and prasada (sanctified food offered to Krsna with love and devotion). Eight successive evenings saw similar programs, each attended by 50,000 people. In fluent Bengali, Srila Jaya Pataka Swami spoke about Krsna consciousness, and children from the ISKCON school in Mayapur, West Bengal, performed well-received dramas.

Bangalore, India—Race Course Road, long one of the major thoroughfares in this capital city of Karnataka state, is also the home of the local Hare Krsna center. Now, at the request of Bangalore’s citizens, the state government has changed the name to “Hare Krishna Road.”