Women in Krsna Consciousness—Questions and Answers 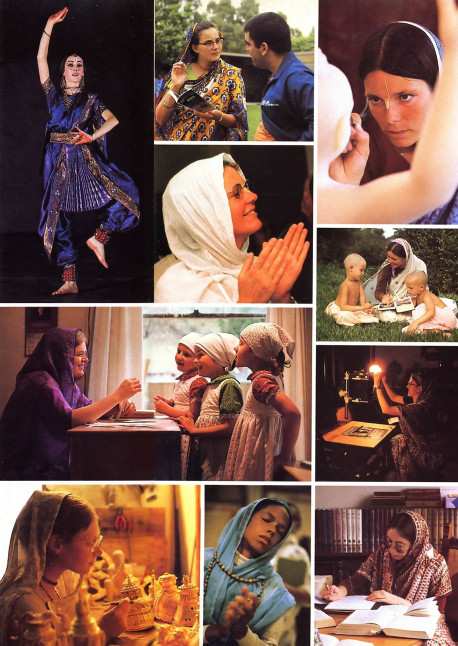 Q. Why should women be interested in Krsna consciousness?

A. So they can realize they’re not women! If we think of ourselves as “women,” we reveal our ignorance of our actual identity. The word woman refers to the temporary material body, not to the eternal, spiritual soul, the person within the body. In maybe forty or sixty years, the body I’m wearing will perish, and I’ll no longer be a woman. But the living force, the soul within the body, won’t perish. Krsna consciousness provides an understanding of the relationship between the soul and matter and the Supreme Soul, Krsna. Human intelligence is meant for contemplating these subjects, not for dwelling on materialistic thoughts based on a false identification with the temporary body.

Q. What do you think of the women’s liberation movement?

Q. In the Krsna consciousness movement, what is the position of women devotees?

A. From the spiritual viewpoint, men and women (and all other living entities) are equal. The soul within the body is part and parcel of Krsna and is equal in quality and quantity to all other souls. But from the material, bodily point of view, obviously there are differences.

Q. What about those differences?

A. As far as serving Krsna and preaching Krsna consciousness, material differences are ignored. Men and women serve the Supreme Lord’s Deity form in the temple—worshiping, cleaning, cooking-and they go out daily to preach to interested people and distribute literature about Krsna consciousness. Women with children both care for their children and spread Krsna consciousness alongside their unmarried godsisters. Actually, to raise a child as a devotee of God is in itself a great service to Krsna.

Q. But I’ve heard that you think women are inferior to men. Is that true?

A. As I mentioned before, spiritually there’s no distinction. In Bhagavad-gita Krsna says that both men and women are eligible to attain the highest destination, to return to the kingdom of God, if they take shelter of Him. Spiritually there’s no duality, no inferiority or superiority based on the body and mind. But there are material differences: women are generally not as physically strong as men, but only women can bear children and nourish them with their breast milk. So it’s natural that women’s duties will differ from men’s in some ways.

Q. Today many people reject that idea. It won’t make your movement very popular among women.

A. We can’t change the Krsna conscious philosophy to make it popular. Nor are we so concerned with popularity. We simply want to present Krsna’s teachings as they are, and those who hear receptively will benefit. The first step in spiritual understanding is to transcend the bodily concept of life. To think “I am a man” or “I am a woman” is to be in illusion. The body is a material dress for the soul, a dress that’s changing from moment to moment, as the body develops, and will change entirely at death. But the constant within the body is the soul, which is not subject to birth, death, or any other material influence.

Q. How do men and women relate to each other in Krsna consciousness?

A. Except for his wife, a Krsna conscious man should regard every woman as he would his mother. So in Krsna consciousness the relationship between men and women is based not on lust but on mutual respect, with Krsna in the center. If this mentality is absent, men and women mix too freely, and their relationship may easily degrade into immorality and mutual exploitation.

Q. What about in more intimate relationships?

A. In more intimate relationships, the man protects the woman. In a woman’s youth, her father protects her; after marriage, her husband protects her; and later on in life her grown sons protect her.

A. Protect from illusion and degradation. That is real protection. When the father, husband, and sons are fully trained in spiritual principles by the spiritual master, they are qualified to guide their family members.

Bhagavad-gita points out that when the religious tradition in the family breaks down, the chastity and faithfulness of women are shaken. As men and women mix freely, the result is abortion and unwanted progeny. From such immorality and licentiousness come broken homes and the degradation of the whole society. Conversely, when the husband is a dedicated ‘devotee of God and the wife is loyal, good progeny and a harmonious society result.

Q. But what if the woman wants to be more, than just a housewife?

A. That is welcome and encouraged. Women in the Krsna consciousness movement sing, write, photograph, paint, act, sculpt, teach, and dance. One of my god-sisters in our West Virginia farm community is an architect. Now she’s helping plan out a huge temple that the devotees there will build over the next few years. So there’s no hindrance at all to a woman who wants to use her special talents to serve Krsna.

A. Real leadership is to teach by example and precept how to go back home, back to Godhead, at the end of this lifetime. A fully Krsna conscious devotee, whether man or woman, is actually more of a leader than all the so-called leaders of modern society. Materialistic leaders simply increase our material problems; a devotee decreases those problems to nil. That is real leadership.

VISAKHA-DEVI DASI, a graduate of Rochester Institute of Technology, is a professional photographer and an expert on photomicrography, in which small objects are reproduced as magnified images. She joined the International Society for Krishna Consciousness while doing free-lance work in India. She and her husband, also a professional photographer, are currently traveling around the world making documentary films about the Krsna consciousness movement.