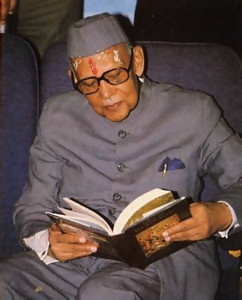 Gov. Chandreswar Singh looks through one of
the books of the Krsna consciousness movement.

Vrndavana, Uttar Pradesh, India—Recently Chandreswar Prasad Narayan Singh, the governor of the north Indian state of Uttar Pradesh (population: nearly 95 million), came to this holy city expressly to visit the Krsna-Balarama temple of the International Society for Krishna Consciousness. After being garlanded by the devotees, he paid his respects to the Lord’s Deity forms in the temple and then met for some time with Srila Bhavananda Goswami Visnupada, who oversees the Society’s activities in Vrndavana and other parts of India. The governor greatly appreciated the books of the Krsna consciousness movement and said, “I am extremely happy to be here amongst so many devotees of Sri Krsna. Congratulations on your effort to let the world know about the secrets of bhakti-yoga [Krsna consciousness].”

Munich—The International Youth Library, which houses the world’s largest collection of children’s books, has chosen Readings in Vedic Literature for Children for its “Choice list” at the IYL annual exposition.

Readings is published by Bala Books, the children’s publications office of the International Society for Krishna Consciousness. The book is an anthology of stories from Srimad-Bhagavatam and Caitanya-caritamrta, classic works on Krsna consciousness never before adapted for young readers.

Illustrations for Readings were executed by Jan Steward, graphic designer for Ravi Shankar, and the stories were edited by Yogesvara dasa, director of the Bala Books project.

East Lansing, Michigan—The Krsna consciousness movement now broadcasts a weekly, half-hour television show here on station WELM. Called The Vedic Version, the prime-time program acquaints viewers with the ways of the Vedic culture as lived five thousand years ago in India and as lived and taught today by the International Society for Krishna Consciousness.

Bombay-Attending a cultural performance at Bombay’s National Center for the Performing Arts during a recent royal visit to India, His Royal Highness Prince Charles discovered the books of the Hare Krsna movement. Between two recitals of Indian music and dance, the prince received two of the movement’s books from a Hare Krsna devotee. “Possibly he found them more interesting than the performance,” reported one Indian newspaper, “for he buried himself in the books.” 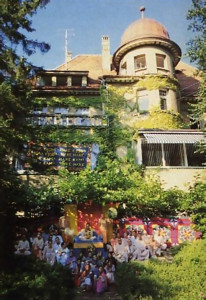 Zurich—The Zurich chapter of the International Society for Krishna Consciousness has received what is, in all of Europe, a rare approbation for any but the largest majority religions: official recognition from the Swiss federal government as a tax-exempt religious foundation. Since early autumn the Society’s Swiss headquarters has been an estate overlooking the Lake of Zurich. The new facility serves as both the main place of worship for Swiss devotees and a center for the expression of Indian art and culture.