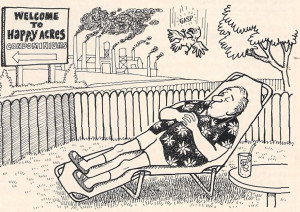 The Bhagavad-gita informs us that we are each an individual spirit soul, completely different from our temporary, physical bodies. The body changes from childhood to youth to old age, but we, the individual souls, remain the same, observing these changes. During our lives we are forced to suffer old age and disease, and at the end we die. At death, we leave our present bodies and transmigrate to another womb, there to develop another body and start all over again in one of the millions of species.

According to the Gita and other Vedic scriptures, the purpose of human life is to escape from this painful cycle by rendering devotional service to the Supreme Personality of Godhead, Lord Krsna. Through devotional activities we cure ourselves of false identification with our bodily coverings. Thus at the end of this life we are not transferred into another womb; rather, we go to the spiritual world to enjoy eternal life as Krsna’s servants.

The trouble is, most people aren’t aware of the painful cycle of birth and death, so they have no desire to escape it. They see no need in giving up their materialistic activities and taking to devotional service. In fact, even when people come face to face with the reality of repeated birth and death, still they are often hesitant to do the needful and give up their materialistic ways for spiritual life.

I found some evidence of this hesitancy in an incident that followed in the wake of last December’s disaster in Bhopal, India, where 2,500 died and thousands more were blinded or crippled by leaking methyl isocyanate gas at the Union Carbide plant there.

Although Union Carbide has stopped manufacturing methyl isocyanate in Bhopal, Union Carbide and other companies continue to produce the deadly gas at five sites in the United States. The Occupational Safety and Health Administration (OSHA) released a sixty-seven-page report last February indicating the chances were extremely remote that methyl isocyanate could leak from any of these sites. Two sites, however, one in Woodbine, Georgia, the other in Middleport, New York, were cited for serious violations of OSHA standards. Union Carbide owns the Georgia plant. The one in Middleport, from which isocyanate has leaked five times since 1982, is owned by FMC Corporation.

The largest leak in Middleport was a forty-gallon release on November 15, just two weeks before Bhopal. Police evacuated the area near the plant, and eleven persons, nine of them children, were treated for eye irritations at the local hospital. OSHA, however, says “the Middleport plant has never had an uncontrolled isocyanate reaction,” which must mean that the stuff has never blown into town the way it did in Bhopal.

Speaking over the phone to a reporter, an employee at the Middleport FMC plant said, “I’d get fired if they knew I talked to you. Sure I worry sometimes. That thing in India, it was terrible. I went home that night we heard about it, and my wife and I just looked at each other. But I need the job.”

There you have it. The man is staring untimely death in the face and yet he’s unable to relinquish the work that put him in such a precarious position. He needs the job, of course. How many of us would react any differently? But we should react differently. We are faced not just with death, but with repeated birth, death, disease, and old age. But who knows? Maybe some people will never give up materialism for serving Krsna, even after fully understanding the calamitous result of such a choice.

Another Middleport FMC employee was defensive: “If the government says we’re safe, we’re safe. They know what they’re doing.”

He might be right. Maybe he can stick to his job and not get fatally gassed. In any case, anyone who sticks to material life is assured a fate worse than fatal. 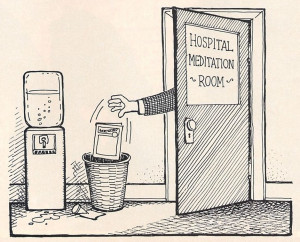 Recently, someone left a copy of BACK TO GODHEAD magazine in the Meditation Room of the Howard County General Hospital (HCGH) in Baltimore. Rev. Cliff Harrison, chairman of the hospital’s ministry committee, did not appreciate the anonymous gift. In fact, in a letter to the Baltimore chapter of ISKCON, Reverend Harrison wrote that “such materials will be immediately removed.” He referred to an official hospital policy, which states, “HCGH is a nonsectarian institution committed to … individual choice of religious preference.” Policy further provides that “standard Bibles will be kept at each nursing station” and that “distribution of religious pamphlets, literature, etc.” is forbidden.

Now, if the hospital allows only one scripture, how is freedom of religious preference to be exercised? If, as Reverend Harrison claims, HCGH is nonsectarian, why should it not allow spiritual writings other than the Bible? Do only standard Bible followers require hospitalization? The First Amendment provides for equal treatment of every religion, without prejudice. In the spirit of religious freedom, we humbly suggest that HCGH provide sufficient shelf space for literature from various religions. A small spiritual library in the Meditation Room could offer a real choice without violating anyone’s privacy. ISKCON of Baltimore hereby offers HCGH enough standard Bhagavad-gitas to accompany the Bibles at the nursing stations. This should go a long way in helping the hospital maintain its commitment to what Reverend Harrison referred to as “individual choice of religious preference.”

This year they’re lining up to see Cher in the movie Mask, which has already won her much acclaim, including the award for best actress at the Cannes Film Festival last May. Mask is the story of tough young Rusty Mason and her relationship with her horribly deformed son. The boy is a victim of a rare disease that twists his facial features and swells them to twice their normal size, creating the impression of a hideous mask.

The story is true. Real-life Rusty was a fast-living divorcee with a passion for motorcycles and drugs—certainly an unlikely heroine for a sensitive, moving film. But her courageous acceptance of fate and her uncompromising love for her son marked her as a person of rare insight and compassion. In a society obsessed with superficial glamour and physical beauty, Rusty displays an awareness of deeper values. She accepts her son’s grotesque appearance philosophically. “People used to ask me if I felt cheated,” she relates. “I just told them that questioning it would drive you crazy. Why me? Well, why not me?”

This can be valuable advice for those trying to survive in a world that often seems unbearably cruel. When tragedy strikes we may be driven to ask in bitterness, “What have I done to deserve this? How can there be a merciful God if I’m forced to suffer so much?” Instinctively we seek a scapegoat—society, our spouse, or God Himself—as if that would lessen the pain. Pride makes it difficult for us to accept that we may have brought the suffering upon ourselves.

In truth, however, we do bring about our own suffering. Although Mask only hints at the deeper understanding of fate, a full picture is revealed in the Vedic scriptures. All living entities accepting the material world as their home are controlled by the laws of karma. Karma refers to the reactions that automatically follow every action we perform. If you inflict suffering upon another living entity, in due course that suffering returns to plague you. And if you are charitable, good fortune inevitably befalls you. To understand this subtle law, as precise and unavoidable as the law of gravity, is to see order in an apparently senseless world. Why do some people live charmed lives while others combat one calamity after another? Simple: everyone gets what he deserves.

Obviously, for the law of karma to work, the living entity must have had an existence prior to his present life. And, indeed, transmigration of the soul is the first tenet of the spiritual science taught in the Vedic literature. The very circumstances of our birth—our parents, our physical beauty, our wealth, our opportunities—are the results of karma. Thus even the apparent innocence of childhood can be marred by suffering and grief resulting from sins performed in a previous lifetime.

This process of continuous action and reaction may seem unrelentingly harsh, robbing us of free will and making us mere puppets in the hands of fate. But we always have the choice of remaining in the karmic cycle or transcending it. For those of us who are weary of the torturous cycle of karmic reactions and want to return to the spiritual realm, the Vedic scriptures provide the process. As Lord Krsna tells Arjuna in the Bhagavad-gita (3.31), “One who executes his duties according to My injunctions and who follows this teaching faithfully, without envy, becomes free from the bondage of fruitive actions.”

Since the law of karma is enforced by the Supreme Lord through His material nature, it is only by His grace that one can break free of it. Actually Krsna’s plan is that we become so frustrated in our attempts at material enjoyment that we seek relief and protection at His lotus feet. And as He promises, such a person attains the eternal happiness of serving Him in the spiritual world.

The story of Rusty Mason can be inspiring for people struggling to cope with the traumas of life. Rusty was brave in the face of misfortune and wiser than most in her acceptance of life’s indignities. Yet how much more inspiring are the realizations of the truly transcendental soul, one who lives with the knowledge of this world’s flickering pleasure and pain, and who understands the great treasure of spiritual insight. By Lord Krsna’s grace, such transcendentalists are here among us to teach us a way of life that insures no more tragedies.