The Pastimes of Scholarship

As an innovative schoolteacher, an erudite scholar,
and a master of argument. Lord Caitanya showed the ideal life. 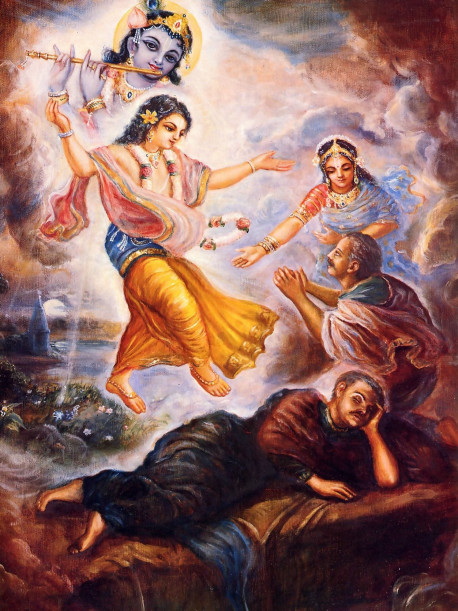 The night after the youthful Lord Caitanya defeated Kesava Kasmiri in debate, the goddess of learning, Sarasvati, informed the great scholar in a dream that Lord Caitanya was none other than the Supreme Personality of Godhead, Krsna Himself.

Continuing a special series of articles commemorating the five-hundredth anniversary of Lord Caitanya’s appearance in Mayapur, West Bengal. By His life and teachings, He inaugurated the Hare Krsna movement.

Navadvipa dhama, the holy land of Lord Caitanya’s pastimes, is situated approximately sixty miles northwest of Calcutta. There, as the Ganges delta begins to form, the river’s different branches encircle a thirty-two-square-mile area and divide it into nine islands. Navadvipa means “nine islands.” Here, the Supreme Personality of Godhead, Lord Caitanya, resided for the first twenty-four years of His appearance in this world.

Navadvipa has traditionally been known as a center of learning. Formerly many Sanskrit scholars would gather in Navadvipa to discuss the Vedic literature, and because these scholars were also great devotees of the Supreme Personality of Godhead, the topics they discussed would always center on Lord Krsna’s instructions in the Bhagavad-gita or on His activities recorded in the Srimad-Bhagavatam. Today the city of Navadvipa retains this tradition of scholarship and devotion to Krsna, and many learned devotees of Lord Caitanya inhabit this place of pilgrimage where the Lord enacted His pastimes of scholarship.

According to the Vedic social system, it is the responsibility of the brahmanas, or scholars, to guide society spiritually and intellectually. The duties of a brahmana are to study the Vedic literature, to teach the Vedic literature, to worship the Deity, to engage others in worshiping the Deity, to accept charity, and to give charity. Lord Caitanya was born into a brahmana family, and at an early age. He took up the first brahminical duty of studying the Vedic literature. The Lord’s deep study was the principal activity of His youth. Indeed, Srila Vrndavana dasa Thakura, who wrote the Caitanya-bhagavata, a biography of Lord Caitanya, devotes six chapters to describing the Lord’s pastimes as a young scholar.

The grammatical rules and definitions of the Sanskrit language are extremely intricate, and one is advised to study this subject matter for twelve years before progressing to more advanced topics, Sanskrit grammar is considered the gateway to education, because once one has mastered this subject matter, all the Vedic scriptures and other Sanskrit literatures become easily understandable. But Lord Caitanya immediately learned these rules after hearing them only once. Because He soon began to win grammatical competitions among the students, the title pandita, meaning “a greatly learned person,” was given to the Lord, who became known as Nimai Pandita. As His reputation as a scholar grew, He began to attract students who wanted to study Sanskrit grammar under His direction. Thus the Lord began to fulfill the second of brahminical duty, that of teaching, even though He was only eleven years old.

Lord Caitanya would often sit on the bank of the Ganges discussing literary topics with His students. One evening a great scholar named Kesava Kasmiri met Lord Caitanya there. Kesava Kasmiri, who belonged to a very respectable brahmana family from Kashmir, had been traveling to centers of learning all over India, debating the Sanskrit Vedic literatures with scholars. The art of debate in the Sanskrit language is extremely rigorous. All subjects must be examined in terms of five categories, including adherence to the purpose of the original text, reason, examples given in terms of various facts, whether or not a clearer understanding of the subject is being brought forth, and support by authoritative quotation from the scriptures. A man of vast learning, Kesava Kasmiri was the undefeated champion in this type of debate. Thus he carried the title Digvijayi, which means “one who has conquered everyone in all directions.” The champion debater had now come to Navadvipa with hopes of increasing his reputation by defeating the scholars there.

Formerly debates were not just academic exercises. Rather, the loser was obligated to become a disciple of the winner. This fact worried the Navadvipa scholars. Actually, it was their plan to match Lord Caitanya with Kesava Kasmiri. They thought that if the Lord was defeated, they would have another chance to debate the scholar, because, after all, Lord Caitanya was only a boy. But if the Lord defeated the scholar, their position would be even more glorified because of the fact that a mere boy from their scholarly community had defeated the champion.

Kesava Kasmiri knew of Lord Caitanya’s reputation as a scholar of Sanskrit grammar, but being very proud of his own brilliant career, he considered himself far superior to the Lord. Thus, when they met on the bank of the Ganges, Kesava Kasmiri spoke rudely to the Lord. Very cleverly, he criticized Lord Caitanya, implying that the “grammatical jugglery” the Lord taught His students did not require great expertise. Lord Caitanya, who acts in many different ways to benefit the conditioned souls, replied to the scholar so as to increase his artificial pride. The Lord presented Himself in a subordinate position and requested the scholar to demonstrate his poetic skill by composing verses in glorification of the Ganges.

Kesava Kasmiri was a great devotee of the goddess of learning, Sarasvati, and being favored by her, he was quite confident of his intellectual abilities. Upon the request of Lord Caitanya, he immediately composed one hundred verses glorifying the Ganges, and he eloquently recited these verses before Lord Caitanya and His students.

After hearing Kesava Kasmiri’s forceful presentation, Lord Caitanya spoke in such a way as to curb the pride He had previously inflated. Sarcastically praising the poetry, the Lord, who had memorized all one hundred verses, repeated the sixty-fourth verse and asked Kesava Kasmiri to explain it. The scholar, although astonished that Lord Caitanya had memorized even one of the rapidly recited verses, explained the meaning of the verse. Lord Caitanya then asked him to explain the qualities and faults of the verse.

The proud scholar became anxious. “You are an ordinary student of grammar,” he said. “What do you know about literary embellishments? You cannot review this poetry because You do not know anything about it.” Lord Caitanya once again humbly submitted Himself before Kesava Kasmiri and replied, “Certainly I have not studied the art of literary embellishments. But I have heard about it from higher circles, and thus I can review this verse and find in it many faults and many good qualities. Let Me speak, and please hear Me without becoming angry.”

Lord Caitanya then fully explained five literary ornaments and five faults in the verse. The Lord analyzed the faults of the verse in terms of its improper composition, contradictory meanings, and redundancy. He next praised the verse for its ornaments of alliteration, analogy, and meaning. The Lord concluded, “I have simply discussed the five gross faults and five literary embellishments of this verse, but if we consider it in fine detail we will find unlimited faults. Lord Caitanya’s explanations were so thorough, even though He had heard the verse only once, that Kesava Kasmiri was struck with wonder. When he attempted to reply to the Lord’s comments, he could find no words to express himself. His confidence and intelligence were baffled. Insecurity quickly replaced his pride.

Kesava Kasmiri had become very proud, thinking himself undefeatable because of his vast learning, but his pride simply bewildered him. The actual position of the living being is one of dependence on the Supreme Lord. In the Bhagavad-gita the Supreme Personality of Godhead explains that all knowledge, remembrance, and forgetfulness come from Him. Kesava Kasmiri’s pride made him ignorant of this truth, but Lord Caitanya showed him great mercy by curbing this pride and thus opening the opportunity for the scholar to receive transcendental knowledge.

Returning home, Kesava Kasmiri worshiped Sarasvati, the goddess of learning, desiring to understand how he had displeased her and had thus been defeated by a young boy. That night mother Sarasvati appeared to the scholar in a dream and revealed to him Lord Caitanya as the Supreme Personality of Godhead Himself. Kesava Kasmiri thus understood his position as the eternal servant of the Lord. The next morning, Kesava Kasmiri went to see Lord Caitanya and immediately surrendered unto Him. The Lord thus bestowed His mercy upon the scholar, freeing him from the pride that had bound him to material life. Thereafter Kesava Kasmiri gave up the profession of winning championships and became a great devotee of the Lord.

After this incident Lord Caitanya shone as the foremost of Navadvipa’s scholars. Indeed, He began to debate and defeat all kinds of scholars in discourses about the Vedic scriptures. But because of His gentle behavior, none of them were unhappy.

By sixteen years of age, the Lord was operating His own school. Befitting His mission as the incarnation for this age, the Lord taught Sanskrit grammar through Krsna consciousness. He explained the rules and definitions in relation to Krsna, thus inducing His students to chant the holy names of God. The Lord’s purpose was for the students and all of us to realize that there is nothing in our experience other than Krsna.

During this time, Srila Isvara Puri visited Navadvipa. Isvara Puri was the most beloved disciple of the great sannyasi follower of Srila Madhvacarya, Srila Madhavendra Puri. Lord Caitanya became acquainted with Isvara Puri at this time and heard from him the recitation of his book Krsna-lilamrta. Later, while in Gaya, the Lord again met Isvara Puri, and accepting him as His spiritual master, received initiation from him.

In spite of Lord Caitanya’s reputation as a scholar, Isvara Puri chastised Him. “You are a fool,” he said. “You are not qualified to study Vedanta philosophy, and therefore You must always chant the holy name of Krsna. In this age of Kali there is no other religious principle than the chanting of the holy name, which is the essence of all Vedic hymns.” Receiving this order from His spiritual master, Lord Caitanya immediately exhibited ecstatic symptoms of love of God.

Isvara Puri, acting as Lord Caitanya’s spiritual master, and Lord Caitanya, acting as the ideal disciple, thus instructed us that only through proper initiation is it possible for the conditioned souls to love God. In the Bhagavad-gita the Supreme Personality of Godhead instructs us to approach a bona fide spiritual master if we seriously desire transcendental knowledge and love of God. The secret of success in spiritual life lies in this system of disciplic succession. One may be a greatly learned scholar or an illiterate fool, but by following Lord Caitanya and receiving instruction from a bona fide spiritual master, everyone can attain that love of God which the Lord’s sankirtana movement is distributing. 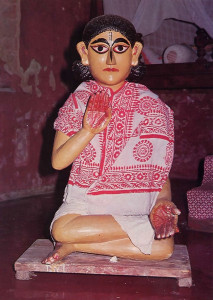 At the end of his twenty-fourth year, Lord Caitanya entered the renounced order, sannyasa. During this period of His life, the madhya-lila, or middle pastimes, the Lord traveled continuously for six years. From His headquarters at Jagannatha Puri, in Orissa, He made pilgrimages to South India, Bengal, and Vrndavana.

For the last eighteen years of His life. Lord Caitanya remained continuously at Jagannatha Puri, where he enacted His antya-lila, or final pastimes. There, in the company of His intimate associates. He personally relished love of Godhead by chanting the Hare Krsna mantra and dancing in ecstasy.

Thus far in this series of articles, we have discussed the first twenty-four-year period, the adi-lila, the pastimes at the beginning. This month’s article completes our treatment of the adi-lila.