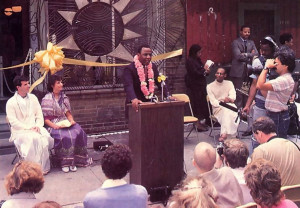 Philadelphia—Mayor W. Wilson Goode recently cut the ribbon for the grand opening of the Hare Krishna Food for Life center here. The Mayor said, “I would like to express my appreciation to the Hare Krsnas for their involvement here—for this shelter and their food program. With the help of private groups like the Hare Krsna movement, we can help more than two thousand persons per day in this city.” Mayor Goode then cut the ceremonial cake and served the first lunch plate to a homeless woman.

Located at 1408 South Street, the Food for Life center was purchased and renovated with private donations. The program has fed the needy since March 1983 and now serves more than seventy-five free lunches a day, five days a week, to homeless persons. The facility, which now shelters twenty men a night, has received more than $20,000 from the Federal Emergency Management Administration through the Philadelphia Committee for the Homeless. 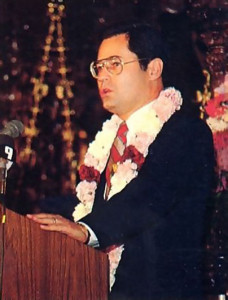 New Vrindaban, West Virginia—Representative Alan Mollohan (D-W. Va.) was the keynote speaker at the recent groundbreaking ceremony here for the Temple of Understanding. Mollohan stated that the $50 million temple will mean great progress for the economy and people of Marshall County, where the community is located.

In a fitting introduction for a temple meant to promote nonsectarian worship of the Supreme Person, Representative Mollohan said, “In a real sense, the facilities that will grace these hills symbolize what it means to be in America, where freedom of religion and freedom of speech are the stalwarts of a democracy that was snatched from the bosom of tyranny at the cost of men’s lives and defended again and again against very real threats to liberty.

“I think it is imperative for us to consider how fortunate we all are that the freedom of America has allowed these works to be completed and will allow the development of this project and more.”

Srila Kirtanananda Swami Bhaktipada, leader of the New Vrindaban community and one of ISKCON’s spiritual masters, emphasized the broad spiritual meaning of the Temple of Understanding. “Krsna consciousness is for everyone,” he said, “because we are not talking about something sectarian or foreign. We refer to the dormant love of God in all of our hearts and to our eternal nature as servants of God. We want to see people become perfect Christians, perfect Jews. When people learn how to relate to each other as servants of God, our troubled society will see a new dawn of peace and prosperity.”

Asked whether he expects every visitor to convert, Srila Bhaktipada, leader of the five-thousand-acre, six-hundred-member community, said, “You must follow the truth wherever you find it. If they are Christians, let them go and become better Christians.”

New Vrindaban’s ornate Palace of Gold, dedicated to ISKCON’s founder-acarya, His Divine Grace A.C. Bhaktivedanta Swami Prabhupada, has drawn 200,000 visitors a year to Marshall County since the memorial was completed in 1979. Plans for the new Temple of Understanding are a testimony that the community is quickly becoming the most famous national pilgrimage site in the West for ISKCON and Indians in general. Twenty times larger than the Palace of Gold, and the second-tallest building in the state (216 feet high, second only to the state Capitol), the temple will join the ranks of the Taj Mahal and Vatican.