Back to Godhead > Society > Behind The Facade Of Health Care

Behind The Facade Of Health Care

Behind The Facade Of Health Care

Is the $300-billion-a-year American health-care industry curing us—or skewering us? 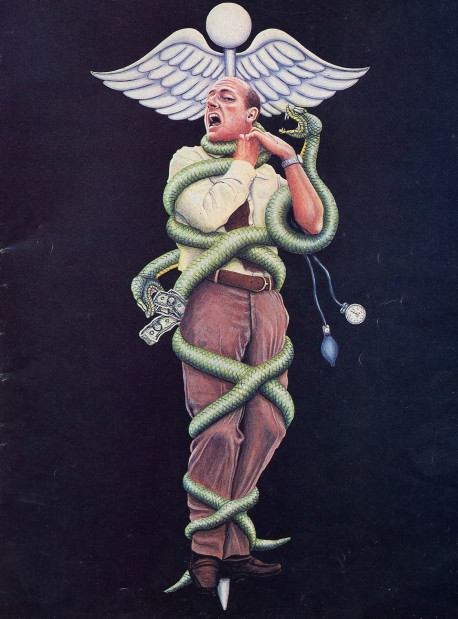 Planning your budget for the coming year? You’re probably worried about the rising cost of health care. And rightly so: Americans spent more than $300 billion for health care in 1982. That’s an average of nearly $1,300 for every man, woman, and child in the United States.

To make matters worse, both the U.S. government and private health insurers, who in the past have paid a big chunk of the nation’s health bill, are getting cold feet. With hospital costs increasing three times faster than the rate of inflation, public and private insurers are taking steps to put a ceiling on what they’ll pay for any given category of health care. For example, under the proposed new Medicare system, if two patients entered a hospital with ruptured hernias, Medicaid would pay the same fixed rate for both patients even if one stayed three days and the other six. The idea is to give hospitals an incentive to reduce the cost of the treatment and send the patients home as soon as possible. But critics of the proposed system say that such penny-pinching will also reduce the quality of health care.

So our higher health costs may lead to poorer health.

But take heart. Spokesmen for the health-care industry assure us that the bitter pill of rising costs has a positive side effect: It is forcing thousands of hospitals and health clinics, which formerly thrived on the open-handed policies of public and private insurers, to compete for customers. Profits now lie in increasing the number of patients, not in padding their bills.

In Oakland, California, the programs for professional football and basketball games carry ads for Peralta Hospital’s SHAPE fitness clinic. In Chicago, Bethesda Hospital touts its small size with the slogan “Large enough to care for you, small enough to care about you.” And in May-wood, New Jersey, a dental clinic recently offered free ten-speed bicycles to new orthodontic patients.

Although most publicity campaigns are still low-key, some hospital directors believe advertising is only a prelude to all-out price wars featuring discounts, rebates, free bonuses, and other gimmicks. Already, Sunrise Hospital in Las Vegas has offered recuperative trips to exotic vacation resorts.

Just imagine! Enjoy pneumonia in a beach chair at Waikiki! Or how about bargain-basement radiation therapy for that malignant tumor in your liver? And if that doesn’t catch your fancy, there’s discount open-heart surgery.

Obviously, we need to stop and take a long look at today’s health-care industry. Even if health care bargains do somehow alleviate our budget headaches, they aren’t going to put an end to more essential afflictions: We’ll still have to get sick, grow old, and die.

From the Bhagavad-gita we learn that no matter how much or how little we spend for health care, we’re guaranteed to suffer the miseries of birth, old age, disease, and death. Giving credit where credit is due, we can’t deny that advances in medicine have largely eradicated typhoid, smallpox, and other dread diseases. But knocking off a handful of enemy soldiers—at the expense of billions of dollars annually for research and treatment—doesn’t mean we’ve won the war. Cancer still strikes two out of three families in the U.S. and is responsible for one death in five. Twenty-two million Americans (about one in ten) need treatment for arthritis. And the booming health-care industry itself is the most conclusive evidence that the miseries of material life are taking their toll now as much as ever. “Health care industry” is a misnomer. It is the disease industry, and the old-age, death, and birth industry.

At most, our hospitals keep misery out of sight, sandwiched between clean sheets in antiseptic wards, away from the mainstream of “normal” life outside. They bring birth, old age, disease, and death under one roof, but not under control. If they could do that, the health-care industry would go bankrupt.

What to speak of controlling disease and death, diagnosis and treatment are themselves often the cause of disease and death. Iatrogenic diseases, those caused by medical diagnoses and treatments, are an ever-present problem in modern health care. Infections developed during the course of treatment account for close to 300,000 deaths each year, and the total number of iatrogenic fatalities is nearly half a million.

Half of all iatrogenic complications are drug-related. The manufacturers of Butazoldin alka, a popular antiarthritis drug, warn that their product can cause headaches, vertigo, coma, hypertension, retinal hemorrhage, hepatitis, leukemia, and death! And Valium, the much-acclaimed antianxiety drug, has as its side effects nausea, fatigue, jaundice, constipation, headache, slurred speech, insomnia and—you guessed it—anxiety.

Of course, modern medicine promises to bring our miseries under control in the future. In a speech to the American Pharmaceutical Society last January, Dr. James A. Halperin, an officer in the Food and Drug Administration, predicted that man will eliminate infectious diseases by 1994 and stop the aging process by 2023. C. Everett Koop, the United States surgeon general, asserts that disease and death rates are gradually decreasing. And we’ve all heard that test-tube babies will soon eliminate the necessity of pregnancy and childbirth.

Such Utopian predictions are another aspect of the “out-of-sight” function of the health-care industry. To say that “the death rate is decreasing,” for example, is a deceptive way of saying that the average life span is apparently increasing. Is there even one person, however, who won’t eventually die? If not, the death rate is still one hundred percent. But hope springs eternal, and with our present suffering hidden behind hospital walls, we look at the future through the distorting lens of unwarranted optimism.

But the Bhagavad-gita recommends that we keep the miseries of life constantly in sight, because until we correctly diagnose birth, old age, disease, and death as inherent features of the physical body, we can’t discover the actual cure for them—spiritual rejuvenation.

The physical body is a covering for the real self—the spirit soul—which is eternal, individual, and part of the Supreme Person, Lord Krsna. Like each of us, Krsna is an individual person, but unlike us Krsna is never encaged in a temporary, physical body. He is, rather, the creator and controller of the physical world. Both Krsna’s body and His abode, the spiritual world, are eternal, full of unending happiness, and without a trace of birth, old age, disease, and death. Since originally we reside in this deathless, spiritual world, it’s quite natural that we yearn for a life free of disease and other miseries. But the health-care industry can’t help us attain this kind of life, because it’s impossible to live an eternal, deathless, disease-free life anywhere in the temporary, physical world. The health-care industry has its place, of course, but to exaggerate its benefits is self-deluding.

Since we are all parts of Krsna, by our constitutional nature we’re meant to serve Him, just as it is the nature of a finger, or any other part of the body, to serve the whole body. When we desire not to serve Krsna but to enjoy life on our own, Krsna sends us to this temporary world and provides us with a physical body. In that sense the body itself is a disease—a disease caused by the “germ” of our unnatural desire to forget Krsna.

The body gives us the chance to enjoy our external senses. But at the same time the temporary, limited nature of sense pleasures and the unavoidable miseries of birth, old age, disease, and death serve to remind us that this world is a foreign place for the eternal, pleasure-seeking soul.

To regain eternal life we must again take up our service to the Supreme Lord, following His instructions in the Bhagavad-gita and other scriptures. “For one who worships Me,” Krsna says, “engaging in devotional service and always meditating upon Me, I am the swift deliverer from the ocean of birth and death.”

So, what are we going to do? Throw down our scalpels and stethoscopes, raise our hands to heaven, and forget all about our mortal bodies? Of course not. The human body, although temporary, should be kept as healthy as possible so that we can serve Krsna and gain release from all suffering.

But are today’s health-care customers really concerned with health? If so, then why do the same Americans who spend $300 billion on health care also spend $25 billion on cigarettes and $46 billion on alcoholic beverages? According to Surgeon General Koop, smoking contributes to 30 percent of all cancer deaths and to 85 percent of lung-cancer deaths. Cancer is the number two killer in the U.S. Smokers are also more prone to other diseases, including heart disease, the number-one killer.

And the surgeon general also warns that regular consumption of alcohol increases the risk of disease of the liver, heart, stomach, and pancreas and is known to cause cancer of the mouth, larynx, and colon. Drinking has also been linked to brain damage and birth defects.

So if Americans are so health conscious, why don’t they quit drinking and smoking? And with gonorrhea, syphilis, herpes, and AIDS—all direct results of promiscuity—ruining millions of lives each year, why can’t people who consider their mortal bodies all-important give up illicit, extramarital sex?

Devotees of Krsna, because of the transcendental satisfaction they experience in their service to Him, easily refrain from smoking, drinking, and illicit sex. In addition, they completely avoid eating meat, which has also been linked to cancer and other diseases. The Vedic scriptures state that intoxication, meat-eating, and illicit sex are detrimental to spiritual progress. They dampen our desire to serve Krsna, block our return to the spiritual world, and thus delay our escape from birth, old age, disease, and death. In particular, the Srimad-Bhagavatam states that the only person completely incapable of spiritual advancement is the meat-eater.

Devotees are not under the illusion that they will be able to keep their bodies healthy forever, so the reason they give up intoxication, meat-eating, and illicit sex is not to preserve their physical health but to increase their spiritual awareness. Still, it is significant that the very activities the Vedic literatures single out as spiritually detrimental are also physically harmful. This is a clear indication that the human body is specifically designed for making a spiritual solution to suffering. As the Vedanta-sutra proclaims, “Human life is meant for spiritual advancement.”

There are many ways to handle your physical health-care expenses. You can sign up for Blue Cross/Blue Shield, join a health maintenance organization, or take advantage of Medicare, Medicaid, or your local free clinic. And with health-care advertising coming into style, you’ll be getting new offers every time you open a newspaper or switch on the TV.

So why not consider a spiritual health-care plan? So far, the health-care industry has offered us an unrealistic, unattainable objective: eternal, misery-free life in the physical body. But the objective of the spiritual plan—eternal, misery-free life in the spiritual world—is available to anyone who practices devotional service to Krsna. And devotional service to Krsna is a most enjoyable cure. Ask any devotee. In addition, on the spiritual plan you’ll be able to free yourself from all physically destructive habits, minimize your visits to the hospital, and see the inevitable miseries of birth, old age, disease, and death for what they really are—reminders that the physical world is not, and never will be, our eternal home.