Back to Godhead > Prabhupada > The Senses: Gratification or Purification?

The Senses: Gratification or Purification?

The Senses: Gratification or Purification? 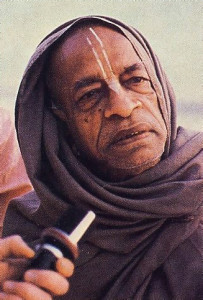 This exchange between His Divine Grace A.C. Bhaktivedanta Swami Prabhupada and some of his disciples took place in April 1975 during an early-morning walk in Mayapur, India.

Srila Prabhupada: Yes, but why do you suffer?

Devotee: Well, it’s all God’s plan. I suffer according to God’s plan.

Srila Prabhupada: No. It is not God’s plan that you suffer; you suffer because you violate God’s laws. He is controlling everything, but He has given you minute independence: you can either follow His laws or violate them. But you are so foolish that you do not understand you are suffering. Your position is like that of the cats and dogs, who also cannot understand that they are suffering.

Devotee: But the devotees also seem to be suffering.

Srila Prabhupada: Yes, but they are not suffering like the nondevotees. Material life, which is the cause of suffering, is like a disease, and devotees are giving up this diseased condition of life for Krsna consciousness. If you are suffering from some disease, you cannot expect to be cured immediately. But one who is taking the medicine is very intelligent. His sufferings will soon be gone. But these nondevotee rascals will not even take the medicine—Krsna consciousness—so they will continue to suffer.

And for the most part, devotees enjoy. Why are you always chanting Hare Krsna and dancing unless you are enjoying?

Devotee: Sometimes I get a sick stomach, too.

Srila Prabhupada: That’s because you have a material body. But your suffering is just like the movement of a fan that has been switched off. The fan is still moving, but the switch is off; so it will soon stop. Similarly, your suffering will soon stop, because you are acting on the spiritual platform. And after giving up this body, you will have a completely blissful life. As Krsna says in the Bhagavad-gita [4.9], tyaktva deham punar janma naiti:

“After giving up the body, a devotee doesn’t take birth again in the material world.” You are not going to get another material body, full of suffering. That is your advantage.

But these nondevotee rascals are going to continue getting body after body, all full of suffering. They will have to accept one body and suffer, and then again they’ll have to give up that body and take another body and suffer. As long as one accepts a material body he will have to suffer, because having a material body means suffering. So those who are not Krsna conscious will change bodies one after another and continue to suffer the threefold miseries [those caused by the body and mind, those caused by other living beings, and those caused by natural calamities].

But devotees, even if they appear to be undergoing some suffering, will eventually give up the material body and remain in their spiritual body, free from all suffering.

Devotee: [taking the position of a materialist] That is simply your faith.

Srila Prabhupada: And it is your faith that you do not believe it. We are accepting the words of the Bhagavad-gita on faith, so we have a chance of getting promoted to the spiritual world. But you have no faith, so you are sure to continue suffering in the material world. We are at least willing to take the chance, but you are so foolish that you are not willing to take the chance. So your suffering is sure to continue.

Devotee: Indians often say, “Well, I will take the chance when Krsna wishes. His will is supreme, so whenever He wishes He will make me Krsna conscious.”

Srila Prabhupada: In the Bhagavad-gita [18.66], Krsna says, sarva-dharman parityajya mam ekam saranam vraja: “Give up all your nonsense and surrender unto Me. Become Krsna conscious.” So, Krsna wishes that you surrender to Him. Why don’t you obey His wish?

Devotee: Why does Krsna arrange for the pleasures of sense gratification if they only bring us suffering?

Srila Prabhupada: Again, the same answer: Krsna has given us minute independence—we can use our senses for either sense gratification or for serving Him, which is the real pleasure of the senses. The senses are meant for enjoyment, but if you try to enjoy your senses in a diseased way—by gratifying them—that is your misfortune, and you will have to suffer. You have to cure your disease by becoming Krsna conscious. Then you will enjoy unlimitedly.

We are not like the Mayavadis [impersonalists], who want to destroy the senses and become senseless. That is not our program. We want to purify the senses (sarvopadhi-vinirmuktam tat-paratvena nirmalam). Suppose a man cannot see because he has glaucoma. The mayavada program is that if your eye is giving you trouble and you cannot see, pluck it out. That is not our program. We want to cure the disease so you can see very nicely. So, our senses should be cured of the material disease by our practicing Krsna consciousness. Then we will be able to enjoy real sense pleasure by using our senses in the service of Hrsikesa [Krsna], the master of the senses.