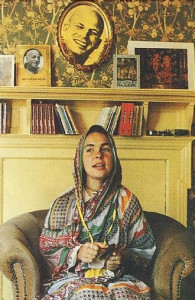 Commenting on her joining ISKCON, Syama-manjari said, “For the first twenty-one years of my life I was a devotee of maya [illusion], giving my life to drugs and rock music. I don’t have a taste for them anymore, and for me to be happy there’s nothing like Krsna consciousness.”

Last June in Glastonbury, England, Syama-manjari joined with her old friend Poly Styrene and other devotees to give a taste of Krsna consciousness to thirty thousand people gathered for the Glastonbury Fair, one of England’s biggest rock festivals.

Devotee musicians flew in from around the world to perform, and, dressed in authentic Vedic costumes, Syama-manjari and Poly Styrene premiered their latest Krsna conscious sound.

After one set, Syama-manjari commented, “Singing about Krsna is completely opposite to singing about material attractions—and the energy increases as you go on.” Poly Styrene added, “Singing songs for Krsna is much nicer, because everyone’s trying to serve Him and there’s no false ego. It’s just like being in the spiritual world.”

His Holiness Dhrstadyumna Swami, who organized ISKCON’s participation in the festival, predicted that the spiritual energy generated there will inspire many who attended to become devotees. He may be right, judging by this comment from one young man: “I’ve just had the ultimate ecstatic experience! The Hare Krsna devotees should take this festival over!” 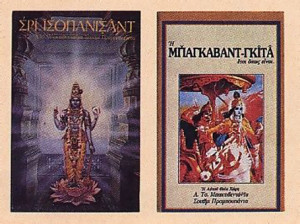 Athens—For the first time, Greeks can read Srila Prabhupada’s Bhagavad-gita As It Is in their native tongue. The Greek branch of the Bhaktivedanta Book Trust has printed one hundred thousand copies of Bhagavad-gita As It Is—Srila Prabhupada’s most widely read work—along with an equal number of his Sri Isopanisads. Said Citraka dasa, president of the Athens Hare Krsna center: “Authentic Vedic information is finally becoming available here. This is a cause for jubilation!”

New Delhi—At a recent convention here on the Bhagavad-gita, India’s internationally renowned classic of spiritual science, ISKCON devotees displayed editions of Srila Prabhupada’s Bhagavad-gita As It Is in forty-three languages. New Delhi’s National Television Network and news agencies enthusiastically noted the large number of editions, and many of the dignitaries at the conference recognized ISKCON as the foremost distributor of the Gita throughout the world.

The head of ISKCON’s delegation to the conference was His Holiness Lokanatha Swami, a regional secretary for India. Speaking strongly on the theme of unalloyed devotion to Lord Krsna, he warned against the pseudoreligionists who misuse the Lord’s teachings for ulterior purposes. Later Lokanatha Swami met with National Minister of Transport Z. R. Ansari, who, although a Muslim, holds the Gita in high regard.

The five-day convention concluded with a sumptuous vegetarian feast of krsna-prasadam (food offered to Krsna) prepared by members of the New Delhi Hare Krsna center.

New Television Series Reaches Out to Millions By Cable

Los Angeles—Cable television is making Krsna consciousness available to millions of Americans in the form of Inside Hare Krsna, a thirteen-part series produced by ISKCON TV under the direction of Nrsimhananda dasa.

The host and hostess of the thirty-minute weekly talk show are Larry Laurent and Munya Surgi, professional broadcasters for the Cable News Network and friends of the Hare Krsna movement. Each week they volunteer their time to interview guests and focus on a particular aspect of ISKCON. In southern California, the series can be seen in half a million homes.

On the East Coast, Bhaktivinoda dasa is working to get Inside Hare Krsna on the air. The show, playing on Group W Cable, can already reach one-and-a-half million homes in Manhattan, and Long Island and New Jersey are next.